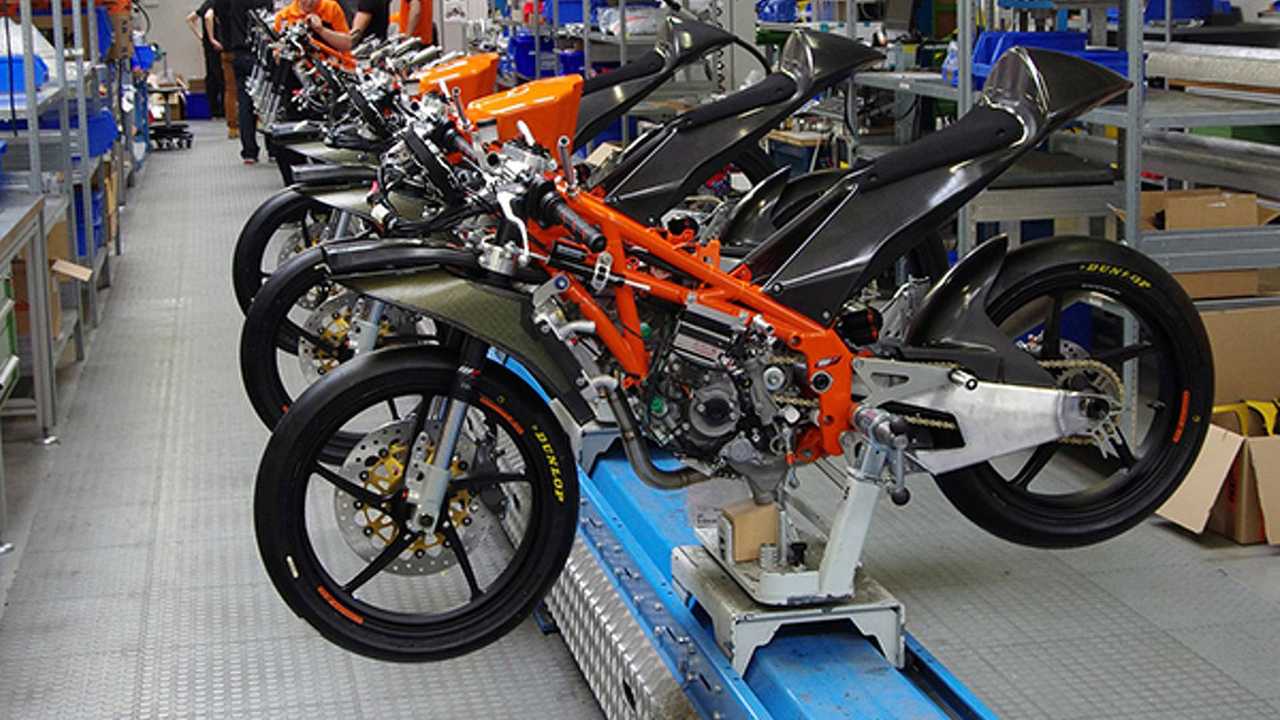 KTM is assembling 40 of its RC250R production racers. Not to be confused with the RC250GP factory MotoGP bike, the production racer uses the same frame and motor, but will be sold to various privateers around the world for just $54,000. Here they are going down the assembly line in Mattighofen.

"A quantity of 40 bikes is too big to be built by a couple of specialists in the race department," explains KTM. "At the same time it is not enough to be handled through one of the main four production lines in KTM´s factory. So the assembly of the race replicas came down to production line No. 5, which is otherwise used for training on standard motorcycle models. This line is shorter and more flexible, so it´s the perfect fit for reduced numbers of special or limited editions."

The tiny steel-trellis frame is a work of art.

"The final meticulous process of construction happened in three phases (because production line no. 5 is pretty short)," continues the Austrian company. "About 10 employees smoothly worked away for two weeks to finish the build. A couple of young mechanics in the final advanced stages of their apprenticeship were also involved and – as you might imagine – the RC assembly was a hugely enticing project. Fabrication and delivery of the Moto3 single cylinder engines came down to KTM´s ‘Motorenwerk’ (engine factory) in the nearby village of Munderfing. The beautiful frames also came from the same location as these are fabricated at KTM’s sister company WP Performance Systems, who also create and weld the frames for all orange street bikes. KTM’s chassis-fabrication process changed this winter from a former production facility inside Mattighofen to a newly built und very impressive WP factory complex, where suspension parts as well as frames are now produced."

The carbon fiber intake rams air straight through the head stock, the most direct path possible.

"The 250cc four-stroke missiles will be raced in national Moto3 championships series. For example in the German IDM, the Italian CIV, Spain’s CEV and Britain’s BSB. It is interesting to note that most customers prefer to pick up their pre-ordered bikes directly from the factory in Austria (instead of choosing some kind of courier system)."

"Maybe because the trip presents a good opportunity to grab and pack in what is otherwise part of the RC250R package: race-stand, selection of sprockets, special tools, service-handbook, spare parts catalogue, download-cable, decoration sticker sets and more.

Road racing in the past with two-strokes had its complications; also the ‘simple’ technology actually needed quite some attention from a mechanical point of view (frequent head checks and cylinders maintenance). KTM’s new Moto3 racer with modern four-stroke-technology impresses with pretty long engine hour revisions: with revs up to 13.500rpm, the service intervals are 4000km. If you want to rev 14.000/min for some extra power, go for it, no problem. In this case KTM recommends only 2000km intervals."

No nonsense in this cockpit, only svelte teens need apply.

"The differences come through some little details," says Senior Engineer Wolfgang Felber of the changes between production RC250R and factory RC250GP. "The GP bike for example runs with the regulation enforced Dell’Orto electronics unit, has a different Akrapovic exhaust system, magnesium wheels, and modified brakes as well as WP factory suspension parts, which help to save some more weight."

In addition to these 40 units, KTM will be supplying an additional 27 to the Red Bull Rookie cup, but those are being assembled by that series' mechanics in Spain to better familiarize them with the machines.