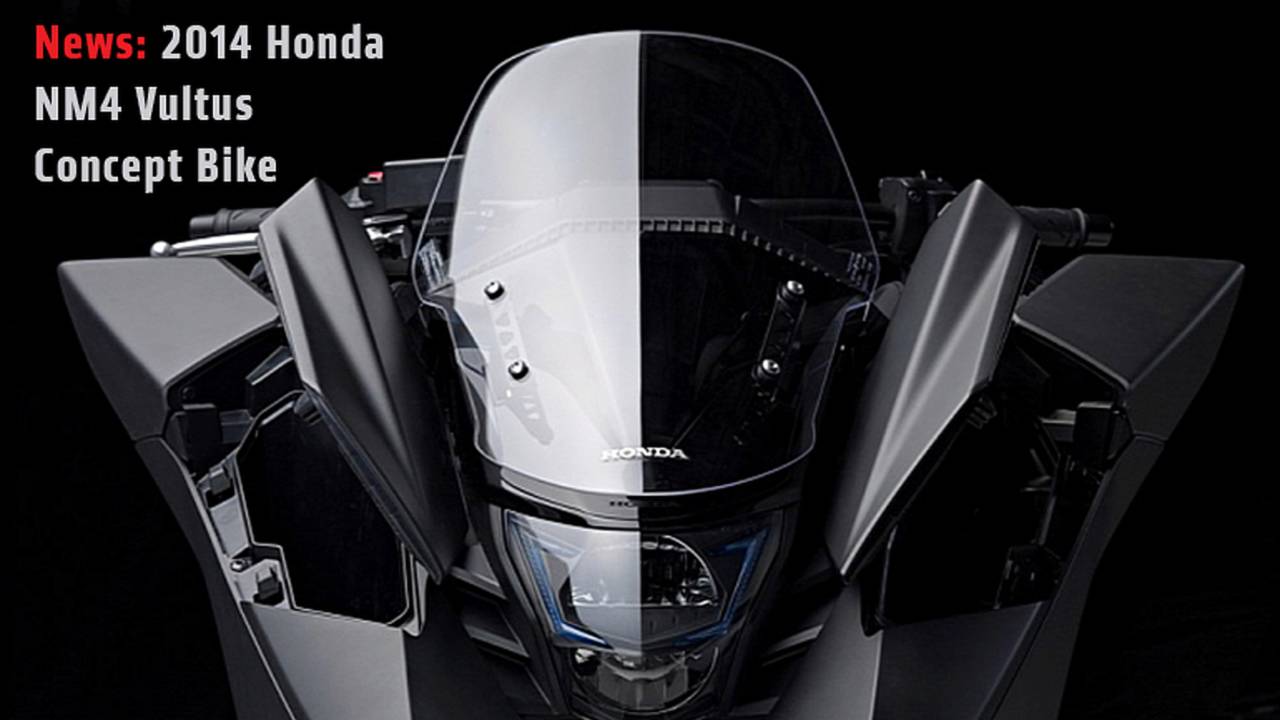 The 2014 Honda NM4 is the latest concept bike to emerge from the Big Red design studio in quite some time. Is it a hit? Or is it a miss? You be the judge.

Is this a glimpse into the future of Big Red? At the Osaka (Japan) Motorcycle Show, Honda took the covers off of two versions of its new production model "NM4," said to be planned for production in the near future.

Honda often develops keywords for its concept bikes, words that help their design and engineering team to measure the bike against emotional goals. For the 2014 Honda NM4 Vultus concept bike, the keywords were "Neo-futuristic" and "provocative." The limited photographic evidence that we've seen so far seems to suggest that Honda's designers have hit the target.

There's a definite kinship with the CTX design language, with long, low and horizontal elements prevailing. Full LED lighting, swept-back handlebars and sleek, integrated luggage and bodywork take the visual impact of the CTX family a step further into the future. The Honda NM4 Vultus is announced with a seriously low seat height (650 mm or 25.59"), a 745cc inline two-cylinder engine and a dual clutch transmission, riding on an 18" front and 17" rear wheel. The rear tire is 200 mm wide, which should give the bike an aggressive look from the rear.

No word yet on a production date, or whether or not we'll get to see the NM4 here in the United St.

New model: A ground-breaking machine inspired by the desire to establish a unique riding experience and an identity not bound by standard motorcycle design, with strong echoes of futuristic bikes seen in Japanese movies. Created by a young design team who remained true to their original concept at every stage through to production, the NM4 Vultus brings radical style to the streets, with function from the future for a new breed of rider.

Honda is founded on innovation. In keeping with this tradition, in recent years, from deep within the company came the desire to create a new machine that would push boundaries, with an identity, riding feeling and experience that could and would place it in a class of its own.

The visual creative spark was fired by the futuristic bikes seen in the anime and manga* television and film styles. Known collectively as “Japanimation”, in Japan both genres have long been very grown-up entertainment, woven into the fabric of life; now, the philosophy, attitude, fashion and feeling are worldwide and mainstream phenomena.

Another critical factor in the genesis of this new entity was a desire to create a machine capable of crossing traditional two-wheeled lines and reach out to a wider audience. The creative team of engineers who conceived, designed and put it together are in their 20s and early 30s. They were given a completely free hand. In that respect, the NM4 Vultus represents a leap of faith from Honda, one intended to appeal to and attract a new kind of rider.

And those that want it will want it now. They may well be aware of the great engine and chassis it’s built on, but what will really captivate them is the way it looks and how it makes them feel. The NM4 Vultus is real, like nothing else, and it is here.

“Honda is a big company. We make every kind of motorcycle. It’s great that sometimes we make a certain machinesimply because we can and because we want to, not because we “should”.

The NM4 Vultus exists because of a passion from deep within our company. We wanted to create something special, not just in the two-wheeled world, but truly unique in the whole world - a machine that engages a human soul like no other.

Our intention was to make something that makes every moment feel cinematic, and we want riding it to be an event - guaranteed – every single time.”

The young social media-engaged urbanite lives a digital existence in a fast moving world. And they’re totally engaged by the new. Without question, the NM4 Vultus is just that. It is avant-garde in both the way it looks but also, and perhaps more importantly, in the detail work that has gone into creating a unique riding experience. The reactive dashboard – with colours that change depending on driving mode – and flip-up pillion seat that acts as rider backrest are just two examples.

Vultus is Latin for appearance, expression – or face. The NM4 Vultus, with its LED lights, future-shock style and stealth bomber silhouette presents a look that will not have been seen in any cityscape this side of an anime movie…

Underneath the brooding menace is a rock-solid chassis and engine package. Packed with low-friction technology, its 745cc twin-cylinder engine is canted forward, creating space and a low centre of gravity. Delivering strong low and mid-range power and torque for smooth acceleration coupled with excellent fuel economy, it’s also equipped as standard with Dual Clutch Transmission (DCT), giving the rider options between automatic twist-and-go D and S mode – plus trigger-operated computer game-style manual MT mode. Intuitive and easy to use, it adds to the futuristic appeal of the NM4 Vultus and is the perfect complement to the engine’s gutsy, usable performance.

It’s wide – 810mm up front, 933mm measured across the mirrors – low, and long; with seat height of 650mm. Drawn from all the overtones and billions of bytes that shaped its creators’ imagination, the manga andanime influences throughout the NM4 Vultus are obvious in every chiseled angle and evocative curve, especially from head on: its broad, angular ‘face’ will never go unnoticed. Behind it, the rider sits enveloped in a cockpit-like surrounding, with the digital instrument panel always in view.

Lighting is full LED with front indicators and mirrors integrated into the bodywork while the shaped headlight is framed with a blue LED definition line. Everything is blacked-out to the max – with carefully-placed glimpses of burnished stainless steel here and there – and only one paint option will be available: matt black.

The obvious question every NM4 Vultus rider will face is “what film was THAT in?”. Its looks are that bold. And as a machine that comes straight from the rapidly beating heart of Japanese manga culture, it was always going to be different. Having absorbed its striking presence, the thought that’s gone into the design becomes more apparent.

Storage spaces abound, concealed in the front bodywork. The lockable left compartment opens with the ignition key and features 1-litre of storage space plus a 12V DC adaptor to recharge what matters while on the move. The right compartment has 3-litres of storage and opens with a push of a recessed, triangulated button. Optional rear panniers integrate fluidly adding even more convenient carrying capacity.

And in one of those “how come this hasn’t been done before…?” moments, the rear pillion seat flips upright when not in use, locking to provide the rider with a secure backrest and almost fighter pilot riding position. Its angle can be adjusted through 3 positions and it slides back/forward 25mm through four settings, to fine-tune cockpit comfort.

The digital dash changes mood depending on the drive mode selected, with subtle colour changes from Neutral (white) through D (blue) to S (pink), ultimately to MT (red). Alternatively, the rider can choose one colour from five other tonal ranges of colour – 25 individual colours altogether – they want to live with on a day-to-day basis

In keeping with its avant-garde appeal, the NM4 Vultus is equipped as standard with Honda’s unique DCT, specially tuned for a smooth acceleration feeling.

DCT delivers consistent, seamless gear changes, and very quickly becomes second nature in use. It uses two clutches: one for start-up and 1st, 3rd and 5th gears: the other for 2nd, 4th and 6th, with the mainshaft for each clutch located inside the other for compact packaging. Each clutch is independently controlled by its own electro-hydraulic circuit. When a gear change occurs, the system pre-selects the target gear using the clutch not currently in use. The first clutch is then electronically disengaged as, simultaneously, the second clutch engages.

The result is a consistent, fast and seamless gear change. Furthermore, as the twin clutches transfer drive from one gear to the next with minimal interruption of the drive to the rear wheel, any gear change shock and pitching of the machine is minimised, making the change feel direct as well as smooth.

With extra benefits such as durability (as the gears cannot be damaged by missing a gear) impossibility of stalling, low stress urban riding and reduced rider fatigue, DCT’s acceptance and popularity is fast expanding.

Three modes of operation are available. MT mode gives full manual control, allowing the rider to shift with the handlebar trigger control buttons. Automatic D mode is ideal for city and highway riding, and achieves optimum fuel efficiency. Automatic S mode is sportier and the ECU lets the engine rev a little higher before shifting up, giving greater performance. It also shifts down sooner when decelerating for extra engine braking.

In either D or S mode, DCT offers immediate manual intervention if required – the rider simply selects the required gear using the up and down shift triggers on the left handlebar. At an appropriate time DCT seamlessly reverts back to automatic mode, depending on throttle angle, vehicle speed and gear position.

Bore is set at 77mm with 80mm stroke, plus compression ratio of 10.7:1. The engine features twin balance shafts, the effect of which counteracts vibration from high rpm inertia. So it manages to feel refined, yet retain the characterful ‘throb’ delivered by its 270° firing order. Where possible, components are made to do more than one job: the camshaft drives the water pump, while one of the balancer shafts drives the oil pump.

There’s a single 36mm throttle body and PGM-FI fuel injection system supplies the optimum amount of fuel/air mixture thanks to an oxygen sensor in the exhaust. Fuel consumption of  28,4km/l (WMTC mode) is particularly impressive, enabling a 300km plus range from the 11.6 litre fuel tank.

A high-absorption catalyser is located close to the engine – as a result the catalyst reaches operating temperature quickly after a cold start, further reducing emissions.

The rugged steel diamond frame at the NM4 Vultus’s core delivers the high levels of rigidity required for agile, responsive handling in a variety of conditions from busy urban to open road. Rake is set at 33° with trail of 110mm, wheelbase of 1,645mm and front/rear weight balance of 49/51. Kerb weight is 245kg.

All specifications are provisional and subject to change without notice.

# Please note that the figures provided are results obtained by Honda under standardised testing conditions prescribed by WMTC. Tests are conducted on a rolling road using a standard version of the vehicle with only one rider and no additional optional equipment. Actual fuel consumption may vary depending on how you ride, how you maintain your vehicle, weather, road conditions, tire pressure, installation of accessories, cargo, rider and passenger weight, and other factors.