Scotch, Bikes, and Bourdain – What Could Go Wrong? 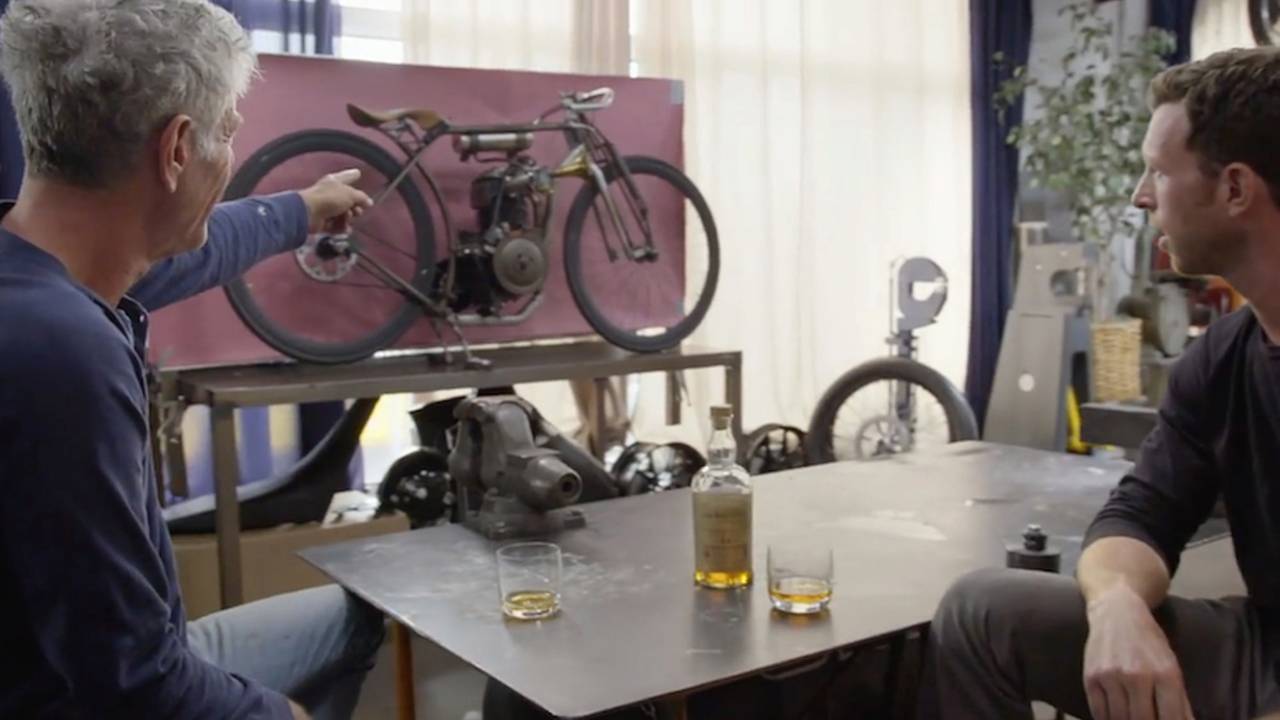 EDITOR'S NOTE: Hey, friends. With the recent tragic passing of Chef Anthony Bourdain we figured we'd republish this so we could once again watch Tony and Max talking about scotch, design, and motorbikes. So, enjoy again and let's all pour one out for Chef, shall we? -JM

Max Hazan, a custom bike builder out of Los Angeles, is a man who knows what he likes—clean lines, raw speed, and forced induction. Chef Anthony Bourdain is also a man who knows what he likes—adventure, good food, and perfection of craft most importantly—and isn't afraid to share those opinions with anyone within earshot. It seemed like a perfect fit then when Balveline Scotch got the two together to talk about craft, bikes, and scotch whiskey in the latest episode of the Raw Craft series.

MORE: Is This Suzuki Boulevard Custom Art? We Can't Decide

Essentially a series of well-crafted, engaging commercials for Balvenie’s “Handcrafted Scotch”, Raw Craft profiles various artisans—a tattoo artist, a furniture maker, a cobbler, and a handful of others—who pride themselves on their painstaking, hand-crafted art. While the Hazan video does include a couple blatant gratuitous shots of whiskey being poured, it feels more like an Anthony Bourdain show segment than it does a video created strictly for the purpose of a brand's product placement.

As for this episode's subject, Hazan has been turning out hand-built customs that blur the line between motorcycle and art for the past five or so years. His bikes are high-performance machines that mix aesthetics and raw power into one heady package. Over the years, his one-man custom motorcycle building operation Hazan Motorworks has churned out various gorgeous forced-induction machines, including a Ducati 860 turbo custom and an amazing supercharged Ironhead.

“Motorcycles are an artistic medium. I approach the process as if it were a painting or sculpture, each part is the same as a brushstroke,” stated Hazan. The self-taught wrencher and builder has created all kinds of two-wheelers using a wide array of donor bikes. “I don’t build choppers, bobbers, or cafe bikes. I love beautiful creations regardless of category. I start with a motor or idea and let the lines dictate what to build around it."

GORGEOUS: We Hang With the Custom Bike Builder who Invented Brat Style

Hazan creates most of his components by hand, sometimes dedicating more than 12-hours to an individual part. Because building a bike takes Hazan a third of a year on average, this video necessarily only captures some of the key parts of the build’s process – frame design, tank fabrication, etc. The video's subject has developed skills to accommodate his immense creativity which has given way to some breathtaking bespoke motorcycles. Hazan explained; “The piece should reflect your willingness to build whatever you can imagine.”

CUSTOMS: Bike of the Week: XR1200TT by Shaw Speed and Custom

Regardless of your taste in bikes, Hazan has probably built something you’ll dig as his range and variety are vast. So even though it’s really just a glorified whiskey commercial, it’s still cool to see scoots in the limelight.

This article was originally published October 13, 2017.