The Dumbest Rule in Racing 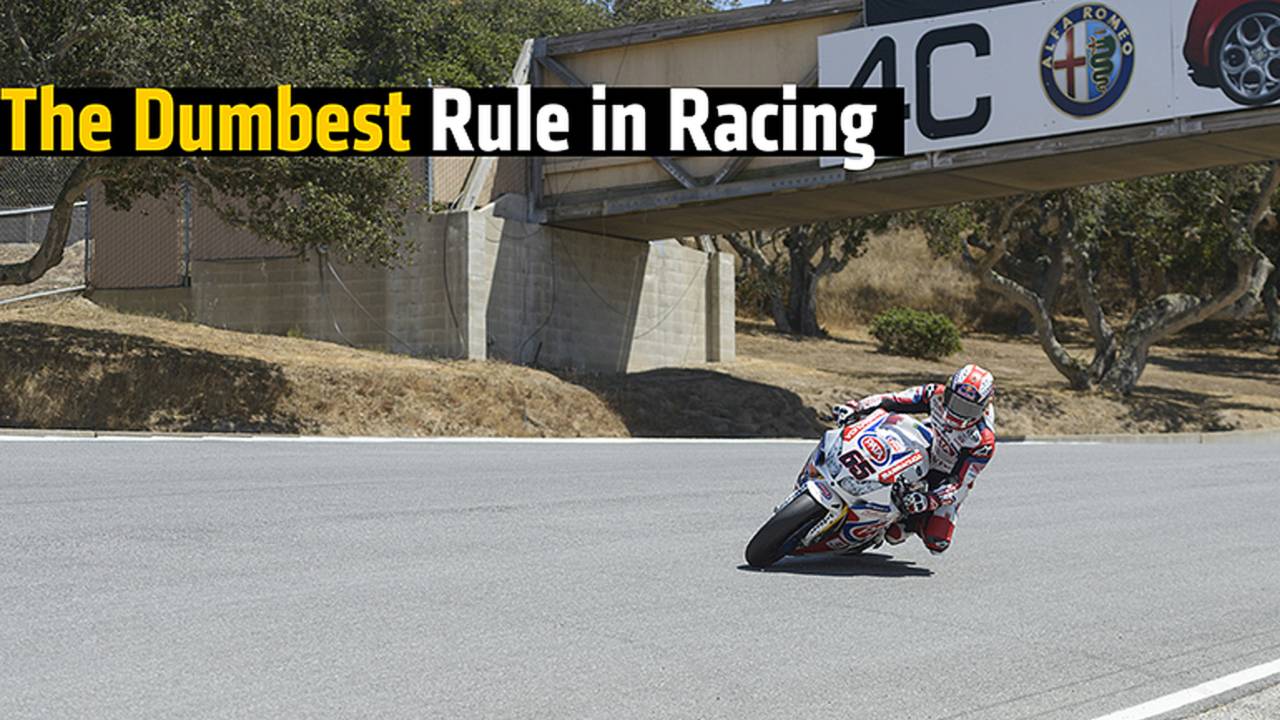 The change of position rule in world championship motorcycle racing, MotoGP, is silly and dangerous, and should be revisited by the FIM before somebody gets hurt.

The dumbest rule in racing can be found on page 37, paragraph 1.21, number 3, inside the MotoGP rule book. At the discretion of Race Direction, for various infractions, a rider may be penalized with a "change of position," meaning to drop back the prescribed number of spots on the track. The instance in question states:

...if a rider accidentally leaves the track, then he may rejoin... at a place which does not provide an advantage to him. Any infringement... during the race by a change of position decided by Race Direction.

On the face of things, it doesn't seem unreasonable. If you cut off a portion of the track and pass one or several riders, you should be required to give those positions back. Racers regularly police themselves on this matter, in particular at tracks like Imola, where a very small mistake can send you into the paved runoff. If you pass no one, but still gain a demonstrable amount of time, there should be some sort of recompense for that. Shenanigans must be controlled in motorcycle racing, no doubt. But the trouble is, how do you execute such a penalty? There are no radios in the riders' helmets to speak to them. From the rule book again:

A board will be displayed for the rider on the finish line during a maximum of 5 laps. If the rider did not go back after the board has been presented 5 times, he will be penalised by a ride through.

Okay, well that seems simple enough. The offending rider, knowing he's probably exited and reentered the track to some advantage, will arrive on the front straight a lap or two later, see the obvious board telling him the easily discernible message to drop back a position, which he will be able to do without significant effort or further compromising safety, and the race will proceed.

Except that's not how it goes at all.

Folger was handed a penalty that made about as much sense as Armor-All on a motorcycle tire.

Take the recent example of Jonas Folger's penalties at Misano, in the Moto2 race. Folger was alleged to have exceeded track limits, which in this case probably meant running a bit wide on one of the corner exits. The infraction was never televised, but assuming it occurred, it would have provided precious little advantage, if any. Trouble was, by the time Race Direction elected to hand down the penalty with a mere 8 laps to go, Folger was already almost five seconds clear of Italtrans Racing teammates Franco Morbidelli and Julian Simon, who were battling for eighth place.

READ MORE: How NOT To Be a Noob at A Track Day

So let's put it all together. Folger, who is German, is supposed to read a penalty board, in English, on a short front straight with the throttle pinned. Knowing he was well clear of the riders behind him, Jonas may not have been looking for any pit board at all, instead just putting his head down and trying to finish out his race. Even if he was looking, the likelihood of him seeing his own pit board, and then another one he's not used to looking for, is questionable at best. Assuming he did see it, he's expected to slow down sufficiently during a race to allow the riders behind him to close a six-second gap, allow one of them through without causing a further incident, and then continue racing. And get all of that done within five laps, or less, if he didn't see the penalty board the first time past.

Easy-peasy, right? No. It's dumb, incongruous, and jeopardizes the safety of riders on a hot race track in the name of fairness, which should never be the case in a world championship race.

You want me to go how far back again?

With three laps to go, it finally appeared that Folger had seen and understood the penalty board, and he began sitting up and looking for the riders behind him. But they were so far behind he couldn't even see them, and his exasperation at the sanctions were easy to understand. The following lap, even though Folger was trying to let the trailing riders close an eternity of a gap, Race Direction mechanically escalated the penalty to a ride-through. Folger dutifully followed suit with one lap to go, falling 12 places in the final standings to 19th, earning zero points.

READ MORE: 5 Reasons You Must Attend the Peoria TT Before You Die

Even the commentators on the MotoGP world feed, hardly known for their harsh treatment of any official decisions, sympathized with Folger's plight. They rightly noted that the penalty board may be confusing and hard to read for a rider streaking by at triple-digit speeds, and that adherence to the penalty would require something of a stunt on a live race track to execute safely. Folger, to his credit, performed that stunt without causing a crash, only to receive his ride through penalty a few corners later.

Common sense dictates that surrendering a position is not an appropriate punishment for an offense that did not result in gaining a position. Race direction could have penalized Folger by a certain amount of time, which would have been transparent to the rider and much more fair. They also could simply have demoted him a position in the final standings, which is still draconian, but at least would have been safe for the riders on track. In any case, it should go without saying that any penalty administered to riders during the course of a race should be easily communicated, understood and executed, which the change of position rule has never been. Until the FIM can find a way to make it so, the dumbest rule in racing should be stricken from the books.