#SheRides - Why Aren’t We Riding in the Rain? 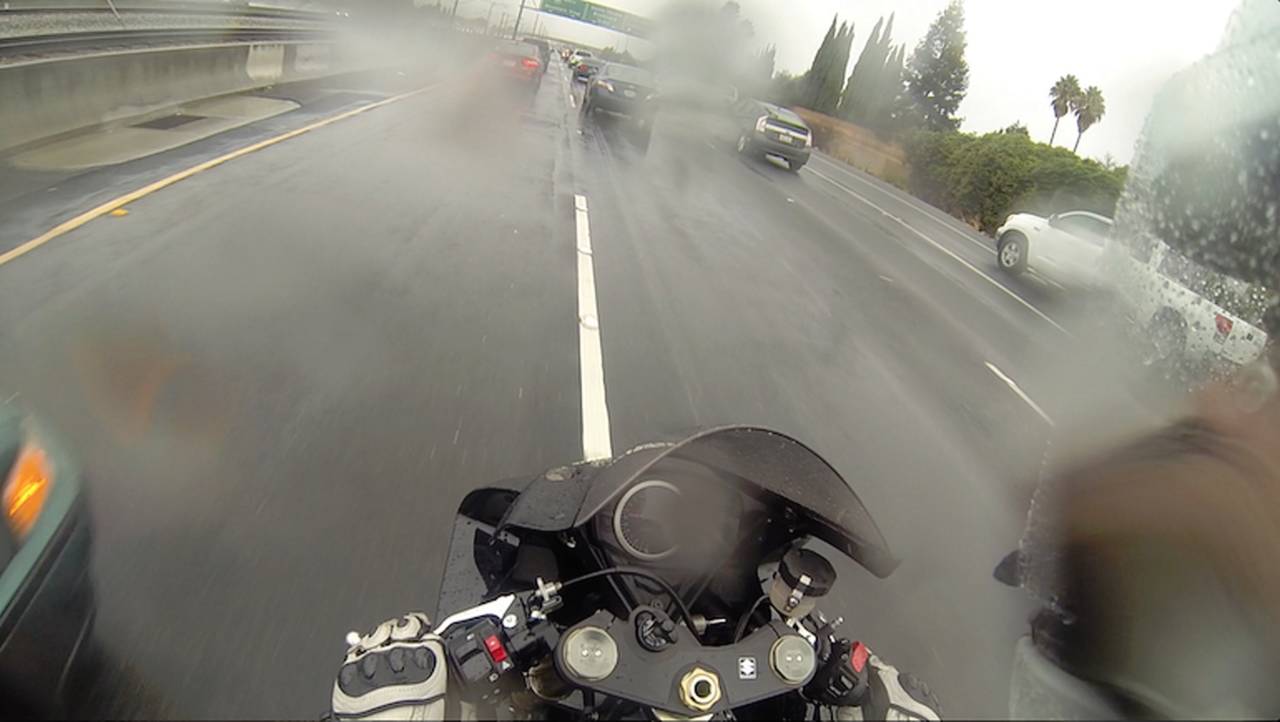 After taking the proper precautions, riding in the rain can be all kinds of exhilarating, so get out there, ladies! #SheRides

If you’ve been watching the weather channel lately, you know that California is getting hit by El Niño. For those not familiar, here’s the definition:

I live in the Bay Area, and we’ve just started seeing wetter weather in the past two weeks brought on by good ‘ol El Niño (I say good because we are in a severe drought here). It appeared that if I wanted to get to sleep in and get to work on time, I’d have to ride in the rain.

To be frank, there were mornings when I woke up thinking, “I don’t want to ride in this wet, crappy weather.” It’s one thing to be wet, but add a bit of frigid air and it’s not the most appealing thing to go out in. To top that off, I’m still riding in summer gloves; however, I did purchased glove liners to help keep my hands warm...which they do not. (I’ve been holding out on buying winter gloves because I’m cheap. Don’t judge.)

Where Did Everyone Go?

I get it, riding when it’s cold and wet is not for everyone, especially if you don’t have the proper gear (see above: ice-cold hands). However, living in the Bay Area, especially in Silicon valley, has some cons when it comes to transportation. The traffic here is horrendous—something that’s five miles away can take you 20 minutes (or more) to get to depending on traffic. For me, life is too short to be wasting so much time in caged warmth, I’d rather risk the rain. So every morning, I hop on my gallant two-wheeled beauty and gallop off to face the four-wheeled masses.

I’ve recently noticed that when I hit the pavement for my morning commute, there’s no other two-wheeled vehicles. Of course, once in a blue moon I’ll see another motorcyclist and think, “Yay! There’s one!” and proceed to do the hand wave and be on my way. But, so far, all of them have been guys (which there is nothing wrong with by the way). It’s just that, I can’t help but think, “Where are all my ladies at?”

I commute to and from work five days a week, and after work I go all over the South Bay Area for workout classes (I have Classpass). I’m more observant in the rain (to make sure I don’t get taken out my a 3,000-plus lb bullet), and I just don’t see any female riders and haven’t seen any on the road since November 2015.

I must admit, I feel a bit alone on my moto commute since I’m used to sharing lanes with various motorcyclists to and from work.

I'm the only one taking up a motorcycle spot. Where's everybody?

Also, I do realize that there are more male motorcyclists than there are female so that does skew why I don’t see more women out. However, not only do I not like the fact that we are the minority, we’re almost non-existent when rain clouds come out.

“Be Careful Out There”

I hear this phrase a lot from my co-workers. They’ll see me walking in after a good downpour and look at me like I’m insane—and maybe I am. Then we have a discussion about safety and most will tell me they are scared driving in the rain, so they really cannot see how I can ride in the rain. I tell them that the reason I do is because I like short commutes, and it’s also fun. But that still doesn’t seem like a sensical reason...

There are other co-workers, especially the guys, who look at me in awe when I walk into the building in full-gear. They tell me that I’m badass and give me mad respect for not only being a female moto rider, but also for taking on the watery terrain on two-wheels.

And to be frank, as much as everyone may think I’m crazy (or awesome) for riding in the rain, it’s really not that big of a deal. (Note: I don’t recommend riding in torrential downpour, i.e., tropical storm-like weather). Yes, it’s been wet and cold lately, but it really hasn’t been terrible.

I may be saying it’s not bad because I’ve ridden in tropical-storm weather (again, I do not recommend this) after riding the streets for only two days on a motorcycle. Somehow I survived and immediately afterwards decided to only venture out on light to medium rain days. I’m way more cautious riding on wet ground, and my eyes are constantly scanning everywhere to make sure that if shi...err, water hits the fan, I have an escape route.

Playing outside will cause the bike to get a bit dirty, but that's okay! Luckily dirt comes right off.

Ladies… Let’s Ride in the Rain!

Ladies, why not? There’s no reason to pack away your moto until sunnier, drier weather comes out and about. Riding in the rain is so exhilarating, maybe even more so than riding in good weather. I absolutely love the smell of the post-shower air, and I giggle like a school kid when I purposely head into a deep puddles to make a big splashes.

Just look at that puddle. Don't you just want to take your bike and splash through hundreds of these?

Also worth mentioning now is that I’m following up with a “How to” ride in the rain for those who think it’s a pain in the ass to pack accordingly for such weather. All I’ll say about this for now is that it takes a bit more...planning for women riders who need to show up at work put together before that 10am meeting.

Don’t worry girl, I got you!

For now, I encourage all you ladies to get the proper rain gear, get on that two-wheeled piece of sexiness you have, and continue to do what makes you feel alive.

And to be honest, I have my own selfish reasons that I want ya’ll out there: I miss seeing you gals.