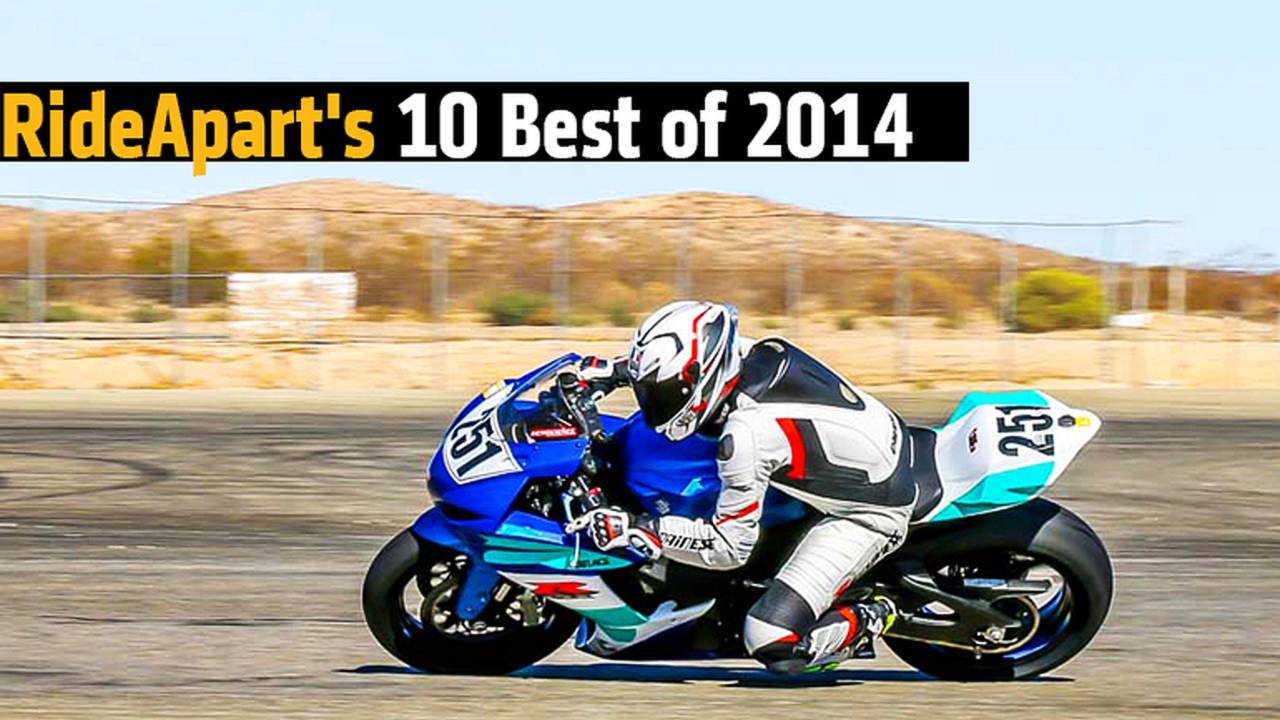 There were a lot of great stories to tell at RideApart this past year. Here are the 10 best of 2014.

If you're reading this, you survived the roller coaster of crazy that was 2014. Congratulations! It's been a full throttle adventure for us here at RideApart as well, and we're glad you all have come along with us through the major transitions we've made this year. 2015 promises to be bigger, better and faster in every way, but before we clip our last apex of the old year and wheelie into the new one, let's take a look back at some of our favorite stories we brought you in 2014.

We're a website that covers motorcycles, but the best stories often feature the bikes themselves only as a backdrop to the bigger story: the people who ride them, race them, and build them. Last week you may have seen the RideApart's Most Popular stories, but here we bring you our 10 Best of 2014. A collection of the most interesting personal stories we came across this year and the ones the staff are the most proud of. Enjoy!

Above photo and lead photo by Marshall R. Valentine

Bruce Speedman takes our Gixxer Six project bike to the racetrack, and finds out a stock bike can hold its own even against heavily modified machines. With only the addition of race bodywork and the necessary safety modifications, Bruce nails down a top-5 finish at Streets of Willow.

This long-term test bike, turned race bike will go even further and faster in 2015 as this week we're exchanging the bike with a 2015 model and revealing our latest findings after dyno tuning with full Akrapovic Exhaust, K&N (street and race filters) and Bazzaz unit, amount other upgrades.

My First Race on the Isle of Man Course

Many have talked about, few have made plans to do it, and even fewer have actually put their rubber on the pavement. Aaron League recounts his first visit to the legendary Isle in the raw detail of the nervous newcomer. Ride along with him as he takes his first lap at speed of the mountain course, survives his first crash, and gradually builds speed on the world's most challenging motorcycle race course.

Greg Anthony recalls the short but passionate love affair with his first bike, a 1985 Kawasaki GPZ 600R. It's a tale of first jobs, first loves, unmuffled exhaust and JB Weld.

This ugly abomination of a motorcycle helped make Greg and Jesse who they are as riders and mechanics today. Greg picked up his tools as a result of the bike, learned the hard way how to fix it and put many memorable miles on it, before it's explosive conclusion .

The one-man record book wrecking crew that is Marc Marquez could arguably be the story of the year on every sports website on the planet. The youthful Spaniard won the opening ten races of the 2014 MotoGP season, and wrapped up his second championship in as many seasons with three rounds to spare. Pete talks about why Marc Marquez made everyone look stupid in 2014.

Bravery is More Than Skin Deep

Heather McCoy brings us the remarkable story of Brittany Morrow, who turned a life-threatening accident into her life's work. Watch the video, read her story, and you'll understand why we at RideApart are positively adamant about wearing proper gear. Brittany learned the hard way, so you don't have to.

Anna Neumeister tells the tale of her cross-continent journey from Virginia to Alaska, on which she sought (and found) catharsis from the grief of the loss of her brother. Ride along as she traverses closed roads, brilliant mountain vistas, and grueling conditions aboard her 1986 Yamaha Radian.

Anna had very little riding experience and jumped on a totaling unfamiliar motorcycle. Read her story, and you'll no longer have any excuses for not taking your next road trip.

How I Murdered My First Motorcycle

Pete Hitzeman supplies the story of tragedy to accompany Greg Anthony's of romance listed above. Read how Pete manages to make just about every newbie mistake in the book, tosses his shiny new motorcycle down the road, and lives to tell the tale. Church Clothes ≠ Riding Gear.

The Loneliness of an Empty Garage

Jason Nark tells a different kind of story, one of a love affair gone horribly wrong. His Ducati Sport 1000 was just the sort of bike that arouses the senses in a way only the Italians seem to do. But after a tumultuous relationship and more than a few mechanical letdowns, he found out that an exotic love affair sometimes isn't all it's cracked up to be.

Customer Service at its Best

Sometimes, you just get a bad, lemon of a bike, but William Connor shows us that the right brand and the right dealer will go out of their way to make sure that even a bad bike doesn't leave you with a permanently bad experience.

Noob in the Box

Jason Avant takes us back to the campus of San Diego State twenty years ago, where he watched a motorcyclist do his best impersonation of a human javelin through a car window. That experience didn't deter Jason from eventually getting on a bike, but it did provide him with the motivation to not just become a motorcycle rider, but a motorcyclist.

That's it for our top 10 list. How'd we do? Was there an article you enjoyed that we didn't list? Leave a link in the comments below, and let us know what you'd like to see more of next year!