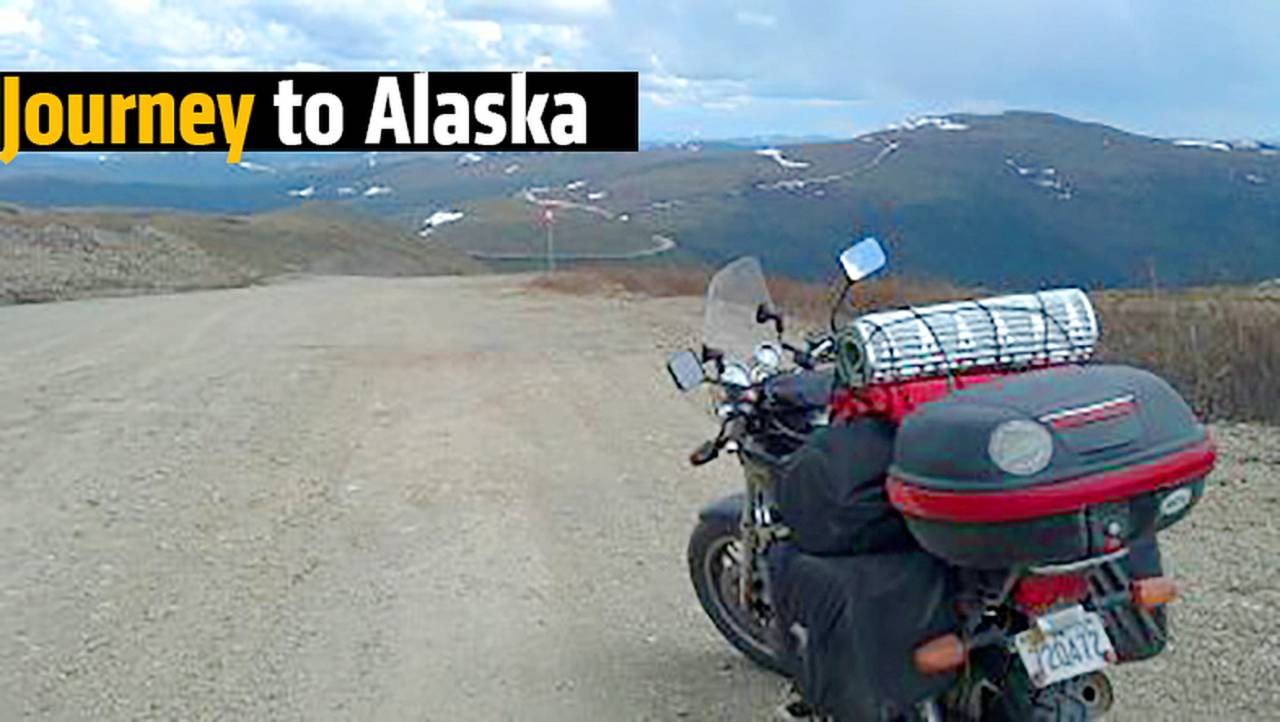 In memory of my brother, Dan, I jump on my motorcycle alone and ride from Virginia for a Journey to Alaska.

My brother Dan, was struck and killed on his motorcycle by a drunk driver my freshman year of college. It had been 8 years since I had ridden a motorcycle, but once he passed I became obsessed with the dream ride to Alaska we used to talk about. In lieu of studying for exams I began frantically memorizing maps and routes, planning my adventure. My obsession blocked my pain. I needed something to focus on, to look forward to, and all I wanted was to be alone. So, I rode my motorcycle to Alaska.

No backup plan, no support crew or even a friend to ride with, it was only to be Dan and I on this trip. It wasn’t until four years after his passing and a month before graduation, that I got the bike that would take me 17,252 miles in one summer.

Bee, a close friend and mentor of Dan’s, is a motorcycle specialist and emailed me the link on Craigslist. I was skeptical when I saw the picture of an 1986 Yamaha Radian, a vintage Japanese street bike. Essentially a detuned performance bike, it was not what I had in mind. Powered by a four-cylinder engine, new it had a 0-60 under 4 seconds and rev'd like a full-blown race bike.

Your natural inclination would tell you a dual-sport BMW GS or KTM would be the bike of choice. A single-cylinder thumper dual-sport with high suspension and low-range power would work on this rugged trip (like some of these), but unfortunately, dual-sport bikes under $4000 are scarce.

So, I trusted Bee’s advice. The Radian, he said, was the bike that would get me to Alaska and back. It would be reliable, easy to find parts for and simple to fix. With 13,500 miles on it, it was in mint condition and only $1000. On a meager student’s budget, the Radian was it, but I didn’t even have a helmet yet.

Although I managed to put about 1000 miles on the Radian before it was time to depart, I still had not ridden more than 200 miles in one trip, and I had yet to experience riding in the rain. I was uneasy knowing how naive I was but I didn’t let it stop me. I was determined to accomplish what I had been planning for the last two years.  As soon as I started riding, memories flooded my mind. I remembered the thrill of riding on the back of Dan’s first bike. I remembered him picking me up from school and how cool I felt to have such an awesome brother. I remembered getting my first bike and how proud I was to ride with him. Riding a motorcycle instantly provided me a place where I could feel close to him again.

I packed up the Radian and departed from Crozet, Virginia, in a light rain. I could not have possibly imagined the conditions I would see ahead that would challenge me to the extreme. In just my first week on the road, I experienced it all. I rode through the entire state of Kansas in one day with a wind advisory of 35mph wind gusts. I had to stay tight on the bike, knees and elbows tucked, bent over the tank, bracing my head and neck above the tachometer. Exhausted and in pain, I grew weaker and weaker with each gust.

When I lost all energy I felt Dan’s strength in my body. I envisioned him riding, his smooth balance, providing the endurance I needed. The wind was no challenge for me now, I would not stop.

As I crossed into Colorado, the sky turned black. I spent the last hundred miles riding into Denver through one of the heaviest downpours of my trip. Many sections of road were flooded, submerging my feet as I rode through. My visor was so fogged, I was blinded and forced to crack it open to visualize the lines on the road. Sharp rain stung my eyes and I imagined Dan’s face. We had the same smile, the same scowl, the same smirk. I was determined to persevere.

Riding through Wyoming I took a small road into Montana. After passing an orange traffic sign saying: “Construction Zone Motorcycles Choose Other Route,” I stopped and hesitated. If I turned around I would have to backtrack a hundred miles to find another route. But it was Sunday, so I took my chances.

Before long I ended up on ten miles of unpaved road with packed dirt, gravel and pot holes everywhere. I repressed panic while regretting my ignorant decision. I’d be sure to drop the bike if I turned around. I had to ride through it. It took me over an hour. I could imagine Dan laughing, like when he would endearingly tease me.

In Montana I ran into some winter weather. It was an unsettling obstacle that challenged me mentally. The temperature dropped to 28 degrees, and as I got into higher elevations the fog became so thick I could hardly see the speedometer. Flurries were falling, my visor was icing and I had to turn my head sideways to peek through the single patch of visibility left. The road was covered in slush and my hands were numb.

I started doubting myself, feeling insecure and anxious about my decisions.  Loneliness crept in, but I could feel Dan’s presence bringing me courage. I was not afraid.

I kept telling myself, “You have to survive this. You have to make it home.” I refused to surrender.

Just one week after leaving Virginia, I crossed into Canada. I was astounded when I got to the border I threw my hands up with tears rolling down my cheeks and yelled, “I can’t believe I’m here!”

The sky was blue and Glacier National Park was brilliant. It felt like a dream. The magnitude of the mountains was humbling. The road twisted and turned through aspen forests with glacial streams backed by tremendous white peaks. Several hawks flew overhead and I wondered if it was Dan’s spirit following.

What an extraordinary first week of riding. Dan’s guidance had provided me the strength, skills and courage to survive strong winds, hard rain, unpaved roads and snow over the last 3,000 miles. I felt invincible on the Radian. We were warriors.

As I followed the Continental Divide North through Alberta and British Columbia, I continued to be humbled by the landscape.  The Icefields Parkway from Banff to Jasper was the most rugged yet gorgeous terrain I had seen. I felt so small surrounded by vast amounts of land facing massive peaks with pure glaciers. It was intimidating standing so close to their magnificence with clouds looming around them as though the weather would change at any moment.

The power I felt from those mountains gave me more and more energy to ride. I stopped less and rode more. The Radian had become a piece of me and the solitude and comfort I felt on it became an obsessive craving. The desire to feel the wind and see the pavement move below me as I got closer to Alaska was like a heroin fix. No matter how many miles I went, it was never enough. I kept wanting more.

I was addicted to this level of detachment I had put myself in. I had separated myself from the modern world and its dark realities, unable to cope, unable to embrace the ones that loved me. I was afraid to allow myself to grieve. I was afraid of loss. I had nothing to give back and therefore could not receive the love of others. So here I was running away from it all, finding freedom within the realness of true nature.

On June 5th 2012, 16 days and 5,221 miles after leaving Virginia, I crossed the border into Alaska at Poker Creek from the Top of the World Highway.

While weeping softly, I rode above tree line with snow-covered mountains in the distance as far as I could see. Memories of Dan came to me from when we were kids, teenagers and adults. I knew he was watching. I knew he was with me. I could feel his warm embrace. I gazed towards the horizon and all I could imagine was his face. I felt calm peace within. It was love.