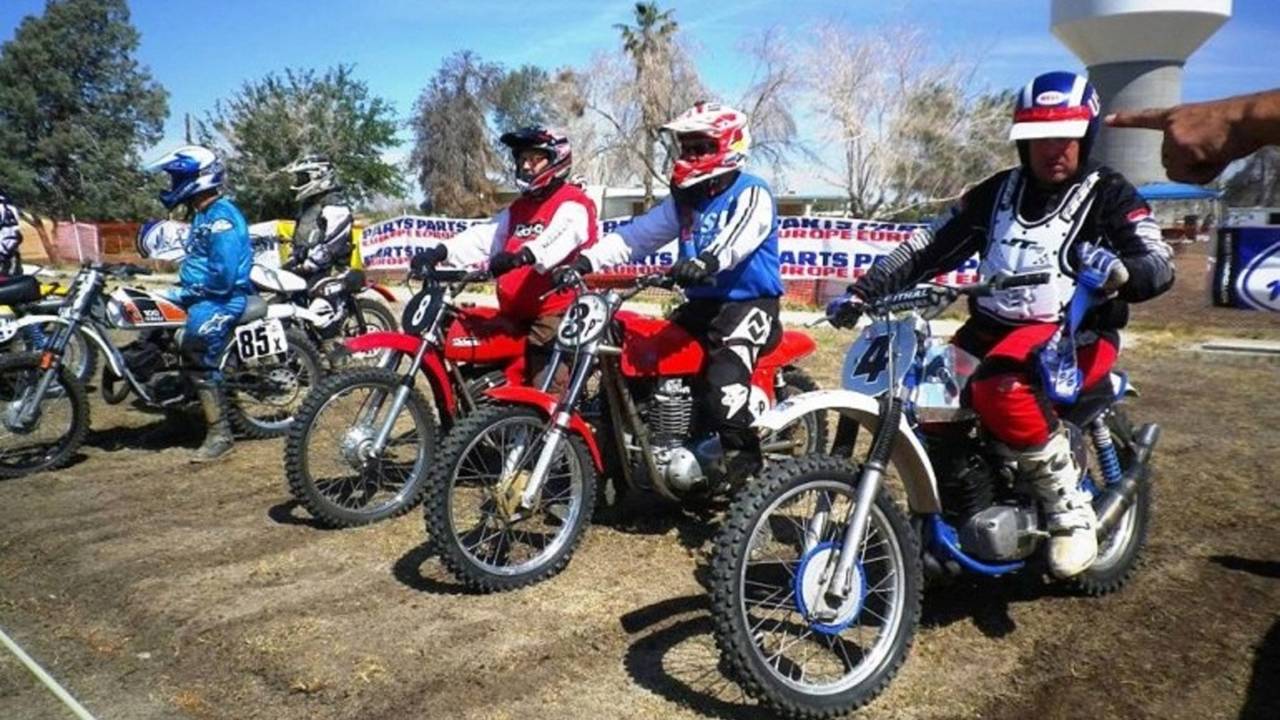 A Wild Ride in Unsettling Settings

This past weekend a new group, the Southwest Vintage Committee, had the fabulous idea to run an old school scrambles event on the site of a unused Air Force Base's former golf course. The race course was awesome -- having new venues and new clubs is always good -- but the abandoned Air Force Base was off-putting. Instead of Caddyshack, I started thinking, "On the Beach meets Road Warrior."

George Air Force Base in Victorville was very active during the Cold War, and operated as a self-contained, mid-century, suburban neighborhood. If you want to see what it used to look like you can watch a young Congressman Bob Dornan in the movie "The Starfighters" via MST3k and YouTube. Here's a still from it of Air Force Wives relaxing by one of the base swimming pools.

They also had on-base tennis, basketball, movies, a hospital and everything else you would expect in a medium-sized town. The government shut it down in 1992 though, and from what I have seen online and in person, hired one security guard to patrol the entire four square mile area. The city of Victorville took over some of the structures, and a church and school on the base still seem to be functional, but otherwise it is a ghost town. The base hospital is pressed into service for a haunted house on Halloween, because even on a bright afternoon in May the whole place is a bit frightening.

The tumbleweeds, burned out building, and motorcycles everywhere gave the whole event a kind of spooky Mad Max vibe. It was like being part of the last race, after an atomic bomb had dropped, when we all know it is just a matter of time before the radiation gets to us... But, nevertheless, the more than 100 racers seemed to be having a blast at this new and most unusual venue.

The track was a meandering natural terrain course laid out by the organizers a few weeks beforehand. There was no real grooming, though there was watering throughout the day to keep the dust from becoming unbearable. Plenty of elevation changes, turns, trees and deep sand kept the former golf course from being boring. No major jumps kept it friendly to vintage machines and knees alike. But don't get the idea that this was a walk in the park, or playful parade laps, this was much more like the type of vintage "grass track" racing you get in England and down under. It was very much like a challenging road course, only laid out on a lower traction dirt/sand/grass surface.

One of the most fun aspects of vintage racing events is the variety of bikes involved. Even in the same race and the same class you can see 2-stroke Yamahas, 4-stroke BSA singles, Honda 305 twin scramblers, and Triumph desert sleds. The bikes all look different, sound different and even smell different from each other. Riding them requires a different technique and line when you are talking about a torque-heavy 4-stroke, versus a light and revvy 2 stroke, and a leading link front end versus a conventional telescopic fork. Here's a sampling of some of the sights from Sunday's races.

4 stroke Honda XL bikes aren't the fastest, but they tend to be bulletproof

Meatball from Hell on Wheels on a BSA single

Not even sure what this one is

Pity the poor Triumph twin rider, bogged down in the sand trap

Sidecars may not get much air, but the fact that they get any is impressive

One of the first bikes to be branded a KTM

Sidecars were allowed to run whether modern or vintage

A Japanese twin lines up next to a European single, and several 2 strokes.

May the best Rickman win

A TriBSA, which is a Triumph twin motor in a BSA chassis

In Spite of the location feeling like a set for The Walking Dead, The Southwest Vintage Committee did a great job putting this event on in a brand new venue -- racing-wise, of course. There are rumors that they may be trying to start monthly events here and elsewhere around the southwest, and I hope they can pull it off. I always look forward to new places to race, and people to race with.