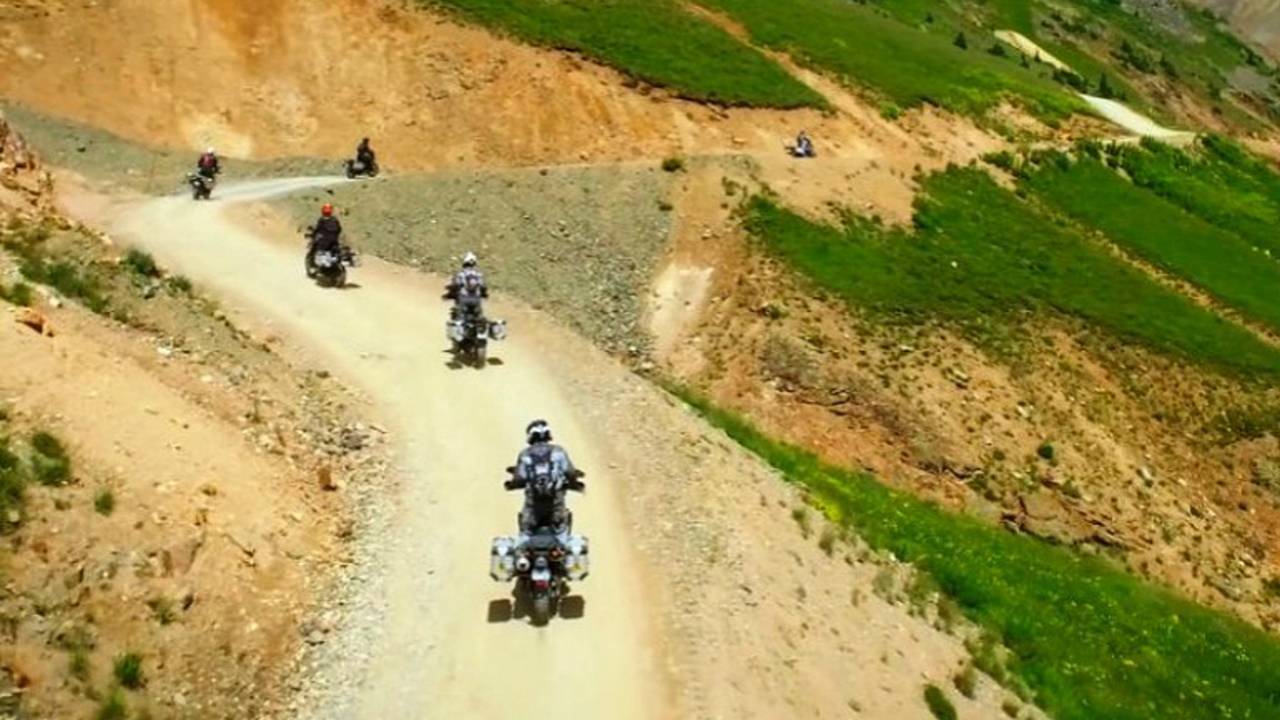 A Story Worth Living was actually showing for a one night only engagement at theaters all over the country, so I saw it with an audience of other bike enthusiasts. Before I get to my review, let me just say that they were not amused. After the credits, when the cast was talking about the making of it and future project plans, a guy behind me said, loudly: "Why don't you try making a motorcycle movie!"

The elevator pitch for this film: A father, his three sons, and two good friends are inspired by Long Way Round/Down to go adventure riding as a bonding experience, and to release the wild man in us all. Unfortunately, the father is a best selling author of a Christian self-help book about releasing the wild man in us all (women need not apply) called Wild at Heart. To me though, Barry Gifford will always be the best selling author of Wild at Heart, just like Nick Cage will always be Sailor, and Laura Dern will always be Lula. That confusion is rampant here too, because though this movie is at best a Sunday school inspirational tale, it received a full PR blitz to the motorcycle and adventure community, who now feel a bit duped. It's about 30 minutes of riding buried in a 90 minute film about love, redemption, and all kinds of other new age-y, Christian-ish psychobabble. This is a typical scene from the movie:

Now I was born and raised Catholic (which we all know is the Cadillac of Christian denominations), so I have had plenty of Sunday school, and this movie felt like an especially long and vague parable. Take one part evangelical philosophy, and one part Robert Bly men's movement, filter through the mind of a man with an undergrad degree in theater and a masters from a bible school, and you get the worldview of John Eldredge. I felt sorry for anyone who did not know this movie had a religious agenda going in.

Colorado sure does look pretty though

For one thing, they just talk and talk and talk, about nothing and everything, and they use a language that seems to have meaning to them, but means nothing to us. They use the word "love" and "story" so much in a few scenes that you get the idea they must be talking in code. None of the cast are actors, by the way, which is painfully obvious when one of them has to lob a softball question at dad in order to allow him to give one of his sermons. The acting is mandatory corporate training film on shoplifting level bad.

The guy on the left is like Andre the Giant but smaller; Dan the Regular Sized?

Dan Allender is also a psychologist, author, and counselor with a Christian worldview, as well as a long time friend of Eldredge (on the right), John Dale. Dale is the only one with real serious off-road riding experience, has an MBA, and works for Eldredge's Ransomed Heart Ministry...so this whole idea may have been his. The other three riders are Sam, Blaine, and Luke Eldredge, and this trip may have been an attempt to toughen them up because two of the three seem a little, well, let's say not quite road ready. They don't have bikes, or gear, but they do have cash, a PR staff, and marketing guy. So, they soon have six slightly used BMW GS800 adventure bikes, and the full complement of gear from all the best companies. After a weekend spent with RawHyde Adventures, they set out on their "epic" 1000 mile back country trip.

Riding roads so wild, there are no stripes painted down the middle of them!

Here's one of the big issues many people had with the film though: Of the supposed 1000 miles, only maybe 10 percent is truly off-road, and not a simple cavort across paved or graded dirt roads. What little real trail riding they do is up and over the well traveled "Alpine Loop," which the state of Colorado says is 64 miles and four to six hours in a 4 x 4. The rest of the trip was basically a state highway ride from Colorado Springs to Silverton (500-600 miles round trip) and what's known as the Million Dollar Highway, around Silverton, Durango, Ouray and Teluride (260 mile loop). All paved.

This kids meal placemat/map perfectly conveys how dangerous this trip was.

What they did was basically a nice ride through some mountain roads, with a little dirt thrown in. And the dirt parts were like the adventure touring version of glamping, with a crew following them around in trucks and side by sides with all sorts of gear and supplies. You can see base camp at one point, which consists of at least two crew cab pickup trucks, and a trailer suspiciously large enough to hold six bikes. When Dr. Dan crashes and obviously breaks some ribs, there is no reason not to take him to the Hospital in Durango.

You can see that wherever they are, the trucks are there too, yet they kept riding, or more likely, they pretend to keep on riding. I really don't think anyone, no matter how badass you are, is going to ride for another two days with three broken ribs and a partially collapsed lung, which is what the x-rays show. These guys are all laughably inept off road, and when they crash it's typically for no reason, or their own fault for doing something stupid. I mean, isn't not riding fast through muddy, unknown water one of the first lessons they teach you when riding off-road cross country? Of course, one of them hits a rut in a deep puddle and gets tossed off.

RawHyde must have drilled it into them that in order to control a big adventure bike "off road" you have to stand in the saddle at all times too. Because no matter if they are on loose dirt trail, hard parked fire road, or even wet pavement, they are standing at full attention on those bikes. Even when just cruising sedately, down a straight dirt road that looks as smooth as the freeway, they are up and ready for action. It's a good thing they didn't do more trail riding, or their legs would have given out.

Rotten Tomato Rating: No critical rating yet, and somehow 51% favorable audience rating, but you have to read some of the unfavorable ones:

"Worst movie this side of Kirk Cameron. Many in my theater walked out,"

"...if you took a shot for every time they said they word 'story,' not even the most seasoned alcoholic out there could make it past about 10 minutes..."

RideApart Worth Watching: I don't say no very often, but the only reason to watch this is if it were to be instead of going to church some Sunday. Luckily, I don't even think you can watch it anywhere if you missed the one night only theater screening.

Redeeming Quality: There really isn't much. Colorado is beautiful, and you don't need an ADV bike to see most of where they rode. I did the Million Dollar Highway loop on a 1972 Honda CB750 in 1995 — without the benefit of cell phones, or chase trucks, or even fuel injection and electronic ignition.

This movie is full of it

You could always use this movie as an example to show that the audience for this type of movie is out there and not being served. Now go write a script and sell it to someone with the money to make it. Speaking of which...

This movie does show how the price of technology has come down. Even 10 years ago you would have needed a bunch of pro-grade cameras and a real helicopter to get the shots they got in this movie with GoPro cameras and a drone.

Worth Noting: For a better example of real off road adventure touring, check out Crossing Dakota (2015) or to see how it used to be before there was such a thing as adventure bikes, Cycles South (1971).

I warned you, but here is a trailer anyway, more like "A Story Worth Leaving"!