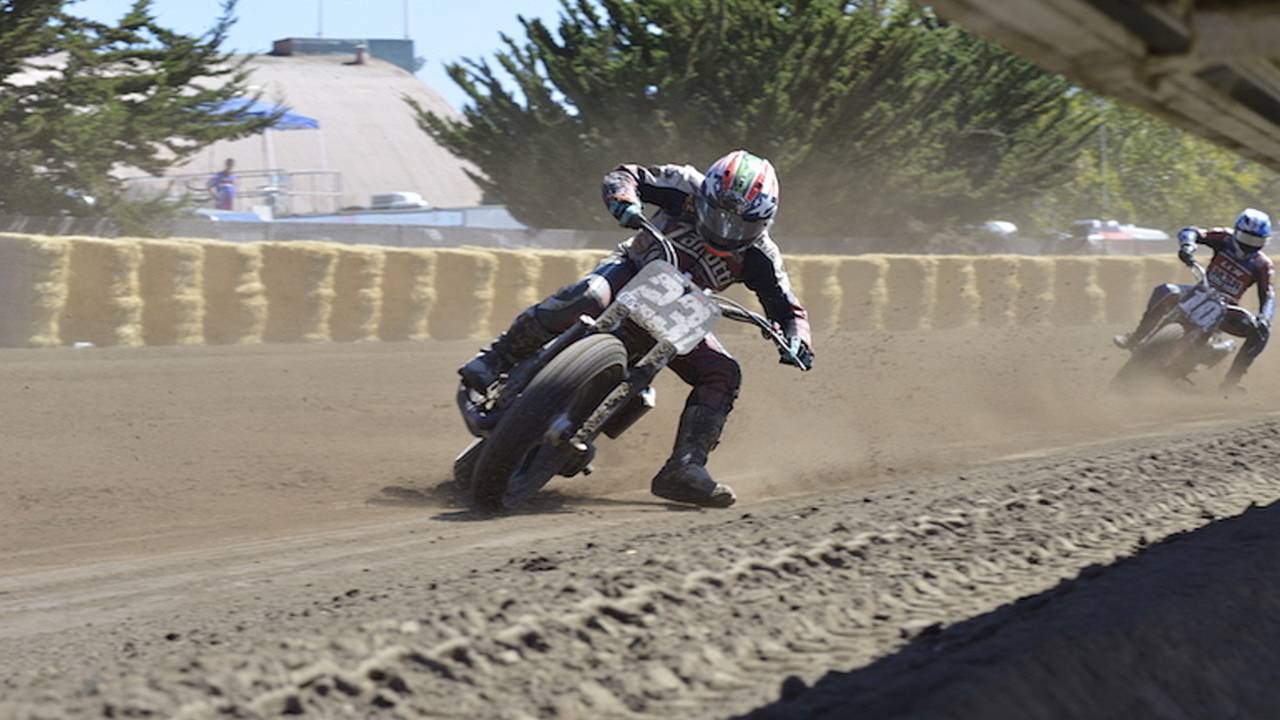 RideApart's Laura Llovet attends the final race of the AMA Pro Flat Track season and falls in love with the sport.

In case you hadn't noticed from our homepage Monday, this past weekend was a pretty important one in flat track racing. A championship was decided, the racing series got a new name, the Indian FTR750 got its first taste of dirt, and Indian announced it's put together a team of very big guns for next season.

To help capture the excitement of the weekend, RideApart decided to send a fresh pair of eyes to take in the spectacle of the Santa Rosa Mile. Laura Llovet had previously never attended a pro flat track race; now she's hooked. Here's her report:

When it comes to professional flat track racing, it's not my specialty. I've never really followed it and had never been to a race. Fortunately, I got the opportunity to attend the 2016 season finale – the Santa Rosa Mile, which is held at the Sonoma County Fairgrounds.

It didn't take much to convince me to head to this event, as I tend to fall in love with anything that involves racing and two wheels. Not only did I fall in love with AMA Pro Flat Track racing (which is now known as American Flat Track), but I'm now excited for the 2017 season. There's more than just the rebranding and an Indian vs. Harley battle happening! More on the the 2017 schedule in a bit, but first an explanation of how I fell in love with flat track.

Saturday - Riding with a Pro and CFTA Races

When I arrived to the fairgrounds, I was introduced to four-time AMA Pro National Champion road racer and AMA Pro Flat Track racer Danny Eslick. I was in for treat; I was slated to ride on the back of his bike on an oval track.

Of course, I was pretty nervous. Especially since: a) I've never ridden on the back of anyone's bike on the dirt; b) I didn't have head-to-toe gear. Thankfully, we stayed on two wheels and I had a blast despite the look on my face...

That evening, we headed to the California Flat Track Association (CFTA) races. These races host a bunch of amateur racers battling it out on the small oval track, located right behind the mile track. There was a lot of bar-bumping, bike sliding, and hooligan-type racing happening. Overall, it was a blast!

You can even flat track a KTM Adventure bike!

There was even an all-women's class sponsored by She'Z Moto (owned by Shelina Moreda). Of course, the girls had to bring their umbrella boys with them!

We've covered how the season ended, with Bryan Smith taking the number one plate in the GNC1 series, and Ryan Wells taking number one in the GNC2 series.

Watching the flat track races is different than watching, say, World Superbike or even MotoAmerica. Don't get me wrong, I will always love watching road racing, but there's something quite different watching flat track. It seems more... raw. For one, it's smaller than the other two race types I mentioned; the setting is more intimate. You can feel and see the crowd emotions while these guys and gals race, and that's quite refreshing.

Flat track racing is also a sport that was created here in the great ol' US of A. So, for me, it makes it a bit more exciting to see it still around, being enjoyed after all these years.

Brad Baker and Joe Kopp, the latter of which who showcased Indian's new FTR750 Scout, battling it out.

Bryan Smith doing what he does best: Getting sideways!

Jared Mees and Brandon Robinson side by side.

Nick Armstrong on an interesting bike: A Yamaha FZ-07.

Even though it was so so close at the end Bryan Smith beat Jared Mees, securing his spot as the series' Grand National Champ.

I met with a number of interesting people during the finale weekend, including Joe Kopp, who piloted the new Indian FTR750 for the first time, and AMA Pro Racing CEO Michael Lock. I'll be sharing their stories in the coming days.

Even though motorcycle racing is a fun and exciting sport, there is an ugly and tragic side to it. Unfortunately, there were a few red flags during the GNC2 heat races, and two riders passed away: Charlotte Kainz, 20, and Kyle McGrane, 17. These two young and talented riders were taken too soon and our thoughts are with their loved ones during this sad and difficult time. Rest in peace.

As for 2017, the now rebranded American Flat Track is beefing up its schedule. In 2016, the series hosted 14 races. But for 2017, they've added four more races, increasing the total number of races to 18. The season will kick off at the newly designed TT track at Daytona during Speedweek. Check out the rest of the schedule below: