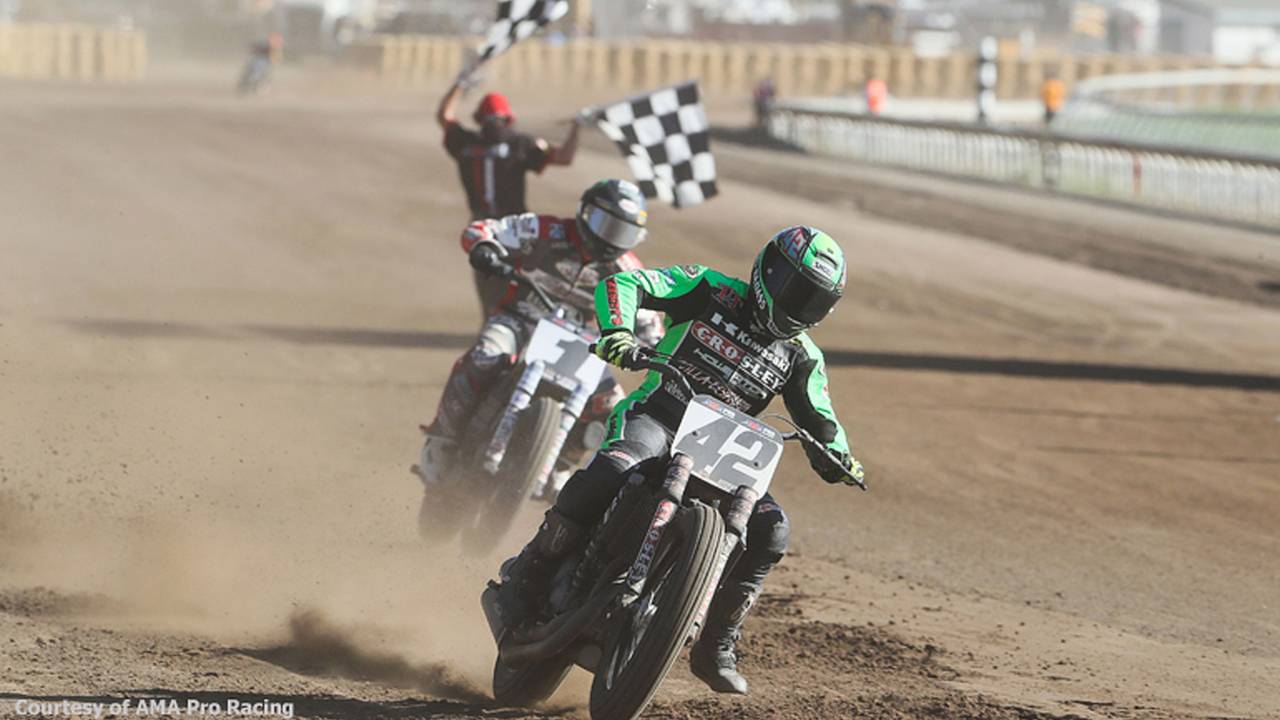 Brad Baker took the checkers at the Santa Rosa Mile, second-place Bryan Smith (42) finished ahead of championship rival Jared Mees (#1) which was all it took for him to claim the 2016 national title.

Baker’s 10-second margin at the line was impressive, but the championship battle between Smith and Mees had everyone on their feet. Separated by only three points, whoever crossed the line first, would win the championship.

“If a racer ever said that he gave it everything on the last lap or last corner, I’d call him a liar because that was everything that I had inside me,” Smith said in his post race interview. “The grips were falling out of my hands, my feet were falling off of the pegs and I could not hold on, so thank God that it worked out. It’s something you can’t explain. Thanks to all the fans, all my friends and everybody that’s been behind me since I was a 7-year-old punk in Scotty Parker’s garage. Everybody back home watching, including Scotty Parker, thanks man, I love you. I wouldn’t be here without you.”

So, Mees hands over his number one plate to rival Smith, not easy for such a fierce competitor like the three-time Grand National Champion. Mees kept Smith honest in the end, so he took comfort in that down-to-the-wire fight and gave his fellow Michigan rider props.

“I wanted to race him for it and we did,” Mees said. “That’s exactly what the crowd wanted to see. It came down to the last lap, last corner and I knew he was out there getting squared up, I knew he was going to make me come right on by and he did. Hats off to Bryan and the entire team. I have got to give a big shout out to my team, we worked extremely hard this year week-in and week-out.”

“I can’t even describe the way it feels,” event winner Baker said. “It’s been a roller coaster of a year. And it seems like every time, I’d have an eight ball. If anything that could happen badly, it did. You just got to grin hard and not let those things bother you. After that Semi, it did kind of come out to my advantage because I got to try out some lines on that motorcycle. Can’t give a big enough thanks to my whole team.”

The 2016 GNC2 champion, Ryan Wells, put an exclamation point on his season. The No. 1 Parkinson Brothers Racing Kawasaki Ninja 650 rider took his fifth win of the season in dominant fashion, crossing the line with a 7-second margin on the competition.

“It’s just crazy to see all of the hard work pay off from this summer, from moving to Michigan and training with Bryan Smith. I just couldn’t be happier and I can’t thank everyone enough.”