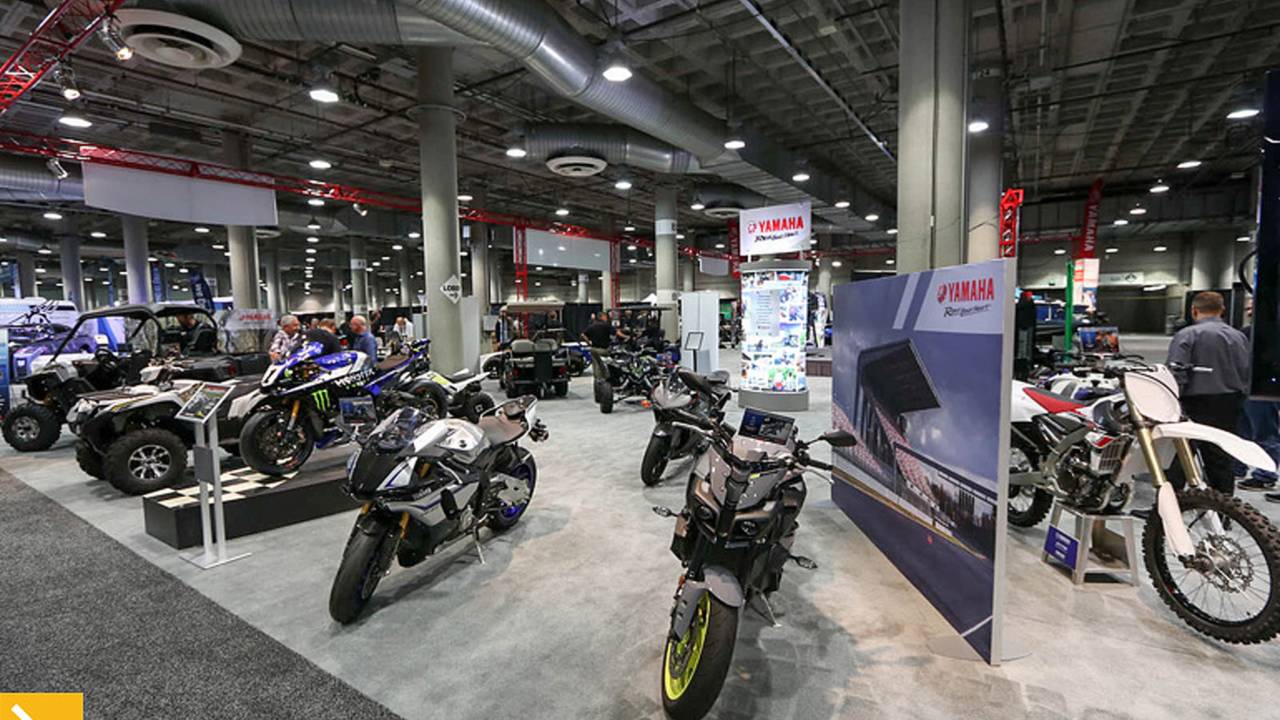 Come on inside, grab a beer and check out what's inside the Yamaha One Garage at LA Auto Show.

Yamaha Motors in out in force at the 2016 LA Auto Show with a display they call the Yamaha Garage. It was located at the bottom floor in the Aftermarket section of the show and the area was crammed to the walls with everything you would either want, wish you had, or hopefully currently have in your garage right now: Motorcycles, ATVs, generators, power washers, golf carts, watercraft, snowmobiles, musical instruments and the list goes on.

The objective was to remind the thousands of motorsport enthusiasts visiting the show that Yamaha, is more than just a motorcycle company. Yamaha’s National Communications Manager Bob Starr kicked off the effort with great speech that focused on the company’s interest in expanding its market share, introducing new models and remaining a force in all aspects of the powersports industry as well as the daily lives of people who don’t know what an R1 is.

“Yamaha is unlike any other company in the world with a diverse product line and passion that spans every lifestyle and every age,” says Yamaha’s Communications Manager Bob Starr (He's wearing the black jacket - Ed.) Indeed it does, and after a few hours of talking with Yamaha reps at the event and snapping photos of all the stuff you might normally overlook, I thought I would point out a few of the great Yamaha products that not too many people know about.

Besides the usual goodies like R-series sportbikes, the new FZ-10 and YXZ side by side but there was also an R1-powered flat track concept race car, a new small displacement snowmobile for kids, high tech Golf Cars and the coolest RC helicopter that is used as an agricultural drone capable of delivering all the GMO-based pesticides a farmer could ever dream of.

We’ll start off with that Yamaha Precision Agriculture R-Max remote controlled helicopter. All GMO jokes aside, this chopper is as trick as they come. It is the key component of Yamaha's Unmanned Spray Services and is intended as an agricultural tool, but I seriously want one just to have as a toy. The R-Max features a 2-stroke, horizontally opposed 2-cylinder engine and a carrying capacity of 4.2 gallons. Imagine flying that in to the party with Jungle Juice instead of herbicide? You'd be the star of the show! Anyway, this system capable of accurately distributing seeds, water, pesticide or whatever else a company might need to take care of your crops. In fact, Yamaha has provided this service in Jaan since 1991 and the company claims to have over 2-million flight hours as part of this service already.

Then there’s the Glide JWX-2 wheelchair. This electric-powered wheelchair is going to make life easier for returning vets with amputation injuries or anyone who has lost the use of their legs. It features a lithium ion battery powered motor with a travel range of 30kms (18-miles). That means a seriously increased range of mobility for people who might otherwise have a difficult time travelling on their own in a contemporary wheelchair. The technology is a direct offshoot of the electric powered bicycle tech that is growing in popularity ever since it turned out that you can win world class bicycle races without anyone knowing about it! These motors have rollback prevention built in as well.

We recently reported on Yamaha eBike Systems and power assist (PAS) bicycle tech and even though it’s easy for this news to slip under the radar it has a lot of potential in the biking- as well as the motorcycle community. For traditional bicycle riders the addition of an electric motor will allow them to go farther, make climbs easier and downhill runs more fun than ever before. You can argue the fact that bikes are meant to be a form of exercise so a motor will defeat that purpose but while that’s true, we are already bypassing the climbs. People are already carpooling or riding chair lifts to the top of mountains and getting the exercise on the descent, so why not motor your bike up instead? Plus, with the ever present threat of losing our OHV riding areas, for some riders, this might be one of the only ways they will maintain the ability to ride outdoors in the future. The point is, Yamaha is all over it and the PW-series bolt-on unit is designed to be installed on almost any bicycle, and transforming it into a lightweight electric dirtbike. So yeah, I’m excited about this.

How about the watercraft? I’ve long been a fan of the Super Jet series stand up watercraft and the Waverunner is one of two brand names synonymous with the term, personal watercraft. These days Yamaha is manufacturing some of the most trick PWC on the planet, like this three passenger GP1800 pictured here. It features a supercharged Four-stroke Inline Four engine that is eco-friendly, super-fast and a hell of a lot of fun on the water. If you have a family though, the dual-engine jet-powered AR line of boats might be a better option. If you don’t already know anything about Yamaha’s jet powered boats and your family likes to be on the water, then check this out.

The AR-242X boasts not one, but two 1.8 Liter high output Four-stroke engines powering jet drives instead of props. It comes with a wake tower and the deep hull is more than capable of creating a wake big enough to surf or wakeboard behind it, holds up to 12 passengers and has a reputation for being fast and reliable. Plus, the jet is, in my opinion, a safer solution than an outdrive setup and it allows you to run in more shallow waters, reduces chance of accidental injury from swimmers contacting a prop and the most important bonus of all, the handling. I’ve spent many hours at the controls of the AR series boats over the years and I own a wakeboard boat too. Not only do the ARs handle better in both high and low speed situations but they are very fast on top end. I want one of these real bad.

Anyway let’s get back to the dirt. If you like side by sides then you already know that the YXZ has set the bar to the next level in this segment. Basically Yamaha built this UTV around the 1000cc Triple and rather than use the industry standard belt drive and centrifugal clutch system found on almost every other UTV, they went direct drive with an actual 6-speed transmission instead. This reduces power loss through the drivetrain, improves driver feedback and now with the introduction of the paddle shifter on the steering wheel and no need for clutch, it makes driving these things more fun than ever. As soon as a four seat version comes out, I’m grabbing one. Until then I will continue to borrow my buddies YXZ and anxiously await the arrival of the next generation of this amazing UTV.

What else is there? Quite a bit; snowmobiles, ATVs, generators, power washers, golf cars, and even though I cannot play an instrument but there are guitars, keyboards and drums for those he get their kicks rocking Route 66 in a musical manner. Yamaha wants to be involved in anything we do to have a great time and lately, they’ve made a massive push that has returned the brand to its position as one of, if not the strongest manufacturer of things that make our lives kick ass.

Since this story is about Yamaha, it was important that I show you this wild custom R1 with a huge rear tire and the craziest swingarm that is so long it was necessary to use two chains, connected by a sprocket at the midway section of it. The paint doesn't do it for me but man did my kids love this thing!