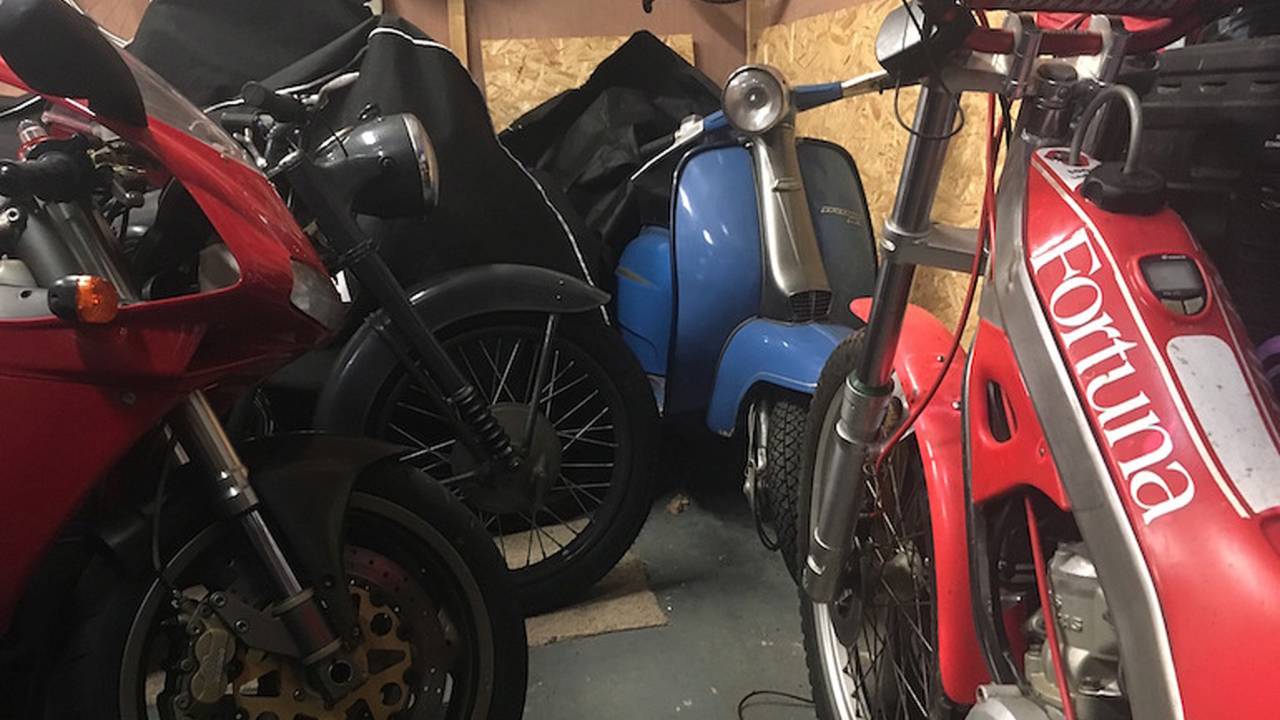 Meet a man with an insatiable addiction for old motorcycles.

An anonymous tale of being hopelessly addicted to buying motorbikes

(The author of this article is someone I bumped into in England recently. He was willing to share his story of being obsessed with bikes, but didn't want us to use his name because, ahem, there may be a few bikes his wife doesn't know about. – Chris Cope)

I've often sat and thought about just how I progressed from having the one bike, which I used every day, into having to build an extra garage just to house my two-wheeled collection.

And when I say garage, I mean 20-foot-by-20-foot double garage, or "the barn" as my wife less-than-lovingly describes it. Her disdain may well be due to the fact it does cast quite a shadow over her precious flowerbeds in summer, but when you are addicted to collecting bikes, sacrifices do need to be made.

So how did it all begin?

Personally, I think it is something in my genes. My father has a collection of bikes as well as cars and many of my childhood memories involve him being in the garage under one broken vehicle or another. But I have another weakness my father doesn’t: I can’t resist a bargain. I can spot a yellow reduced sticker from halfway across the supermarket aisle and once it has caught my attention, like a magpie to silver, I have to have it. Even if I don’t need it.

And that’s when the little voice of justification in my head starts to speak, the same voice that has seen me hide bikes from my wife’s gaze for over two years. I know people say a bargain is only a bargain if you need it, otherwise it is simply spending money, but I can’t resist. That’s how I ended up with my first additional bike.

A Yamaha RD350LC had passed through the hands of three of my less than mechanically sympathetic friends before I snapped it up for a bargain £800 (US $975). Non-running, naturally. It stayed that way for the next nine years. Collecting bikes doesn’t mean you actually need to ride them, just looking at them and knowing they are yours often provides more than enough pleasure.

Which is how I ended up with my third bike. eBay also played its part.

Collectors such as myself have addictive personalities and are known for bursts of brief, but intense, fixation on a subject. I watched the film Quadrophenia one evening and decided I needed a Lambretta Li150. The next day I was on eBay. When I saw an Li150 that had failed to sell, I contacted the seller immediately.

The bike didn’t have a UK plate, as it was an Italian import. This might have put other buyers off. It would involve a bit of work contacting an owner’s club and the Driver and Vehicle Licensing Agency (DVLA) to get it UK registered, but the seller wanted to be rid of it and my offer of £800 was quickly accepted. A bargain was had and unlike the RD, my enthusiasm for Quadrophenia lasted long enough for me to get the scooter road registered and even buy a U.S. Army parka for when I rode it. (An Army parka is a popular fashion accessory when riding old scooters in the UK – CC) That parka hasn’t been out of the wardrobe for five years and the Li150 hasn't seen the road in at least three years.

Time for a change

My interest switched again, this time after going to the Goodwood Revival and seeing a Triumph Tiger Cub in scrambler guise. I fell in love. I was on eBay immediately and £1,000 lighter within a few days. When my dad found out, he fell in love, too, and began dropping quite a few unsubtle hints. The Triumph now lives with him. I kind of miss not seeing it in my garage, but at least he’s getting it working properly and I have room to add new bikes.

When the economy is in freefall it is a great time for collectors, since many people start to sell luxuries like motorcycles. I wanted a Ducati 916 and had done since my teenage years, so when the 2008 financial crisis hit I kept an eye on the used ads. Sure enough, one popped up. And soon I had a lovely original generation 916 in my garage. But, of course, that kick-started an all-new fascination: first generation models.

If you are a collector, anything serves as justification for spending money on a bike. First generation models are, you tell yourself, investments. A pension. Something for the future. The sad truth is that an investment only pays off when you finally decide to sell. The chances of this happening when you are a collector are rare. So far I've only continued to acquire even more bikes.

I already had one RD, but a friend was selling his YPVS model – an original and the first YPVS generation built. This one ran for a few years and I actually used it before parking it under a cover – next to the other RD – when its fuel tank sprang a leak. I also used the "investment" excuse to buy a limited edition Aprilia Tuono, which a dealer had undervalued on his showroom floor, making it tick more than one of my boxes: rare and a bargain! It was soon joined by an original 1998 YZF-R1, which was a daily ride. Sort of. I hate getting it wet so it also spends much of its life in my garage.

Beware the power of nostalgia

When I was younger my father used to commute on a Velocette Venom, an old British oil-spewer from the 1960s. I owned it briefly when I was 18, but at that point I only wanted to go fast, so Dad sold it. The older I got the more I thought about that bike, so when he mentioned that the chap he sold it to had died and it was up for sale, I was determined to be reunited. I didn’t want the old British bike, but because it was Dad’s old rig nostalgia opened my wallet. My garage now smells of leaking gasoline and the floor has splatters of oil. Still, it’s a beautiful bike to look at – if not horribly viscous and uncooperative when it comes to kick-starting into life.

Reading down this list of machines, and I have left off a trials bike and another classic or two I picked up at bargain prices. You may think it is a dream garage. But it isn’t. The truth of the matter is that looking after a bike collection involves more than you think. Every year I need to insure them, for example. That's not too bad. There's a company in the UK called BikeSure that allows me to put them all on one policy. It's more the MOTs (A Ministry of Transport test is a safety check required for motorized vehicles in the UK – CC), tax, multiple battery chargers, a dehumidifier for the garage to prevent rust, standard mechanical woes, and so on. Any chance of making money out of a bike collection rapidly vanishes.

So why do it? For me it is simple. I love the thought of owning such beautiful and varied machines almost as much as I do riding them. Probably more so, if I’m honest with myself. Bikes are far easier and cheaper to collect than cars if not simply because they're easier to store; they take up less space. If I make the mistake of looking at the financial expenditure, it does sting a little. Sometimes I wonder if I should just clear it all out out. But that thought doesn't last long. The collector in me can always find a justification for not letting go.