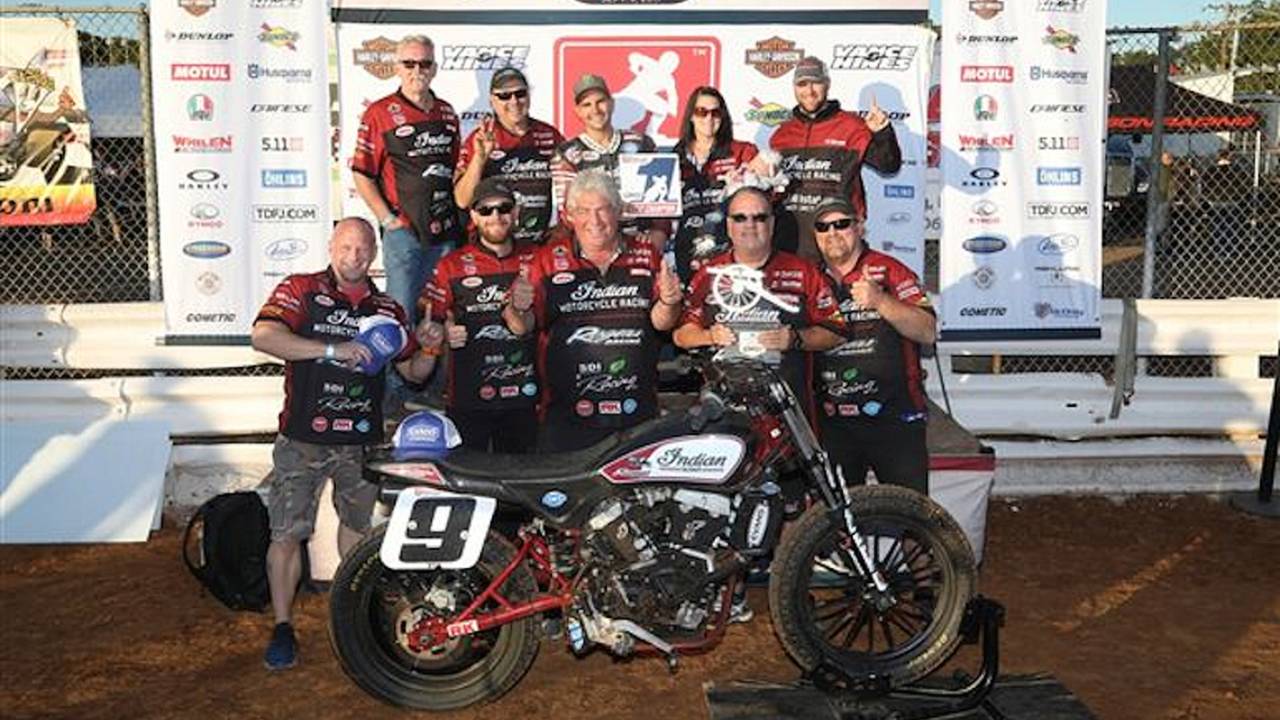 Jared Mees clinched the AFT Championship on the Indian FTR750 before his home crowd at Williams Grove Raceway in Pennsylvania.

With two races remaining in the season, Indian Motorcycle/Rogers Racing's FTR750 pilot Jared Mees put on another master class performance to take the title in front of his home crowd. The Pennsylvania native scored his fourth overall premier class championship.

“Man, it's an honor to be able to come to Williams Grove - I was born and raised 45 minutes from here - and to clinch this championship in front of all my friends and family,” Mees said. “We had a phenomenal year. I had a magnificent team behind me. I don't know what else to say. I give all the credit to those guys, they work so hard week-in and week-out. The Indian was a phenomenal motorcycle for me from start to finish. It's unbelievable.

“To win a championship in the fashion we did this year and - no offense, but to dominate it. To go out there and pull off nine wins and clinch the championship with two races to go, it was phenomenal. I never thought it would have happened, especially considering the talent of the other guys out there.”

It also meant a lot to Mees to be able to make history, by scoring the brand’s first Grand National Championship title.

Although it looked like it was going to be Mees's day to shine after he won his heat, multiple red flags threw some uncertainty into the mix. And even after his FTR750-riding rival Bryan Smith crashed out of the race, Mees didn’t go easy. He held on to the win and crossed the line 0.232 seconds ahead of Brad Baker’s Indian FTR750.

Joining the Indian Wrecking Crew duo on the podium was Briar Bauman – who runs Zanotti Racing's Kawasaki Ninja 650 – in his fourth podium of the season.

“It was awesome racing with these guys, but the track was very tough and demanding today,” Bauman said. “You had to be on your game and hit every mark perfect.”

In the AFT Singles class – despite already being mathematically eliminated from title contention – Kevin Stollings, Jr., Ben Evans Honda CRF450R, continued to stake his claim as the outright fastest rider in the class mounted on Ben Evans' Honda CRF450R. Second place Kolby Carlile increased his championship advantage to 12 points over rival Brandon Price. The titles hopes of long-time championship leader Shayna Texter dimmed a bit as she failed to make the Main Event due to a flat tire on her Richie Morris Racing CRF450R.

As part of American Flat Track's television broadcast package with NBCSN, the cable network will air the Harley-Davidson Williams Grove Half-Mile on Thursday, September 28, at 10:00 p.m. ET as part of a Half-Mile doubleheader with the Lone Star Half-Mile. Both one-hour shows will feature flag-to-flag coverage of both Main Events along with exclusive features giving fans a behind-the-scenes window into the sport.