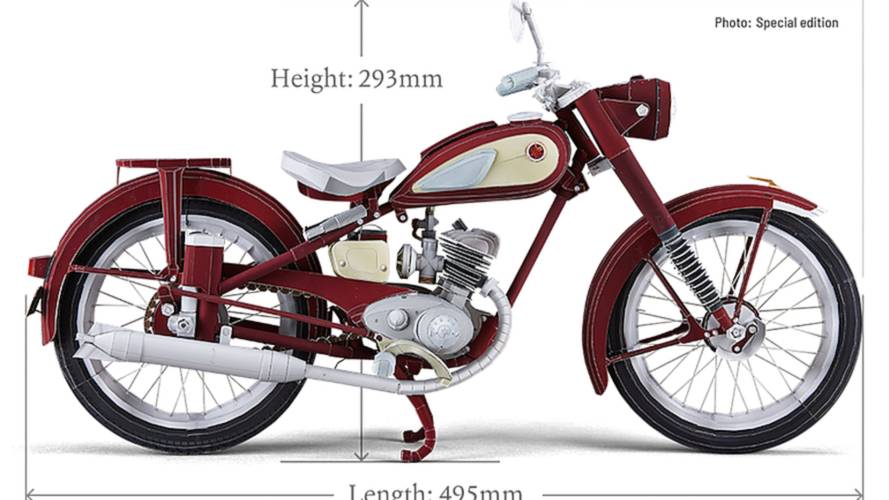 Yamaha releases paper model of YA-1 to mark two-decades of papercraft kits.

Back in 1997, Yamaha released its first paper model kit – an impressively detailed (for the time) VMax. Since then, the paper craft section of the manufacturer’s website has expanded to include dozens of motorcycles, and even a few random animals and some other miscellaneous kits, that you can download free of charge to build yourself. The newest addition to this lineup is a 1/4-scale model of Yamaha’s first-ever-motorcycle; the YA-1.

This new kit is the fifth entry into the company’s “Ultra Realistic” series – an apt name considering this kit requires printing, cutting-out, and gluing nearly three-dozen pages of small parts, plus another 50 pages of detailed instructions. Like the rest of Yamaha's paper craft offerings, the YA-1 kit can be downloaded in full-color or in plain white. The kit also comes in two different variants: the first being the “normal” kit that uses paper and glue for everything across the board, and the second being the “Special Edition” kit that utilizes string or thread to create more lifelike spoked wheels.

For anyone unfamiliar with the tuning fork company’s inaugural motorcycle, the YA-1 was a bike first released in 1955. In addition to earning a spot in The Society of Automotive Engineers of Japan’s “240 Landmarks of Japanese Automotive Technology”, the YA-1 marked the beginning of more than half-a-century of continued successful motorcycle production.

If you'd like to build your very own YA-1, or any of Yamaha’s other paper craft kits, you can get everything you need (minus the scissors, glue, and patience) here on the papercraft section of company’s website.