Meet the Biski: The Scooter-Jetski Hybrid 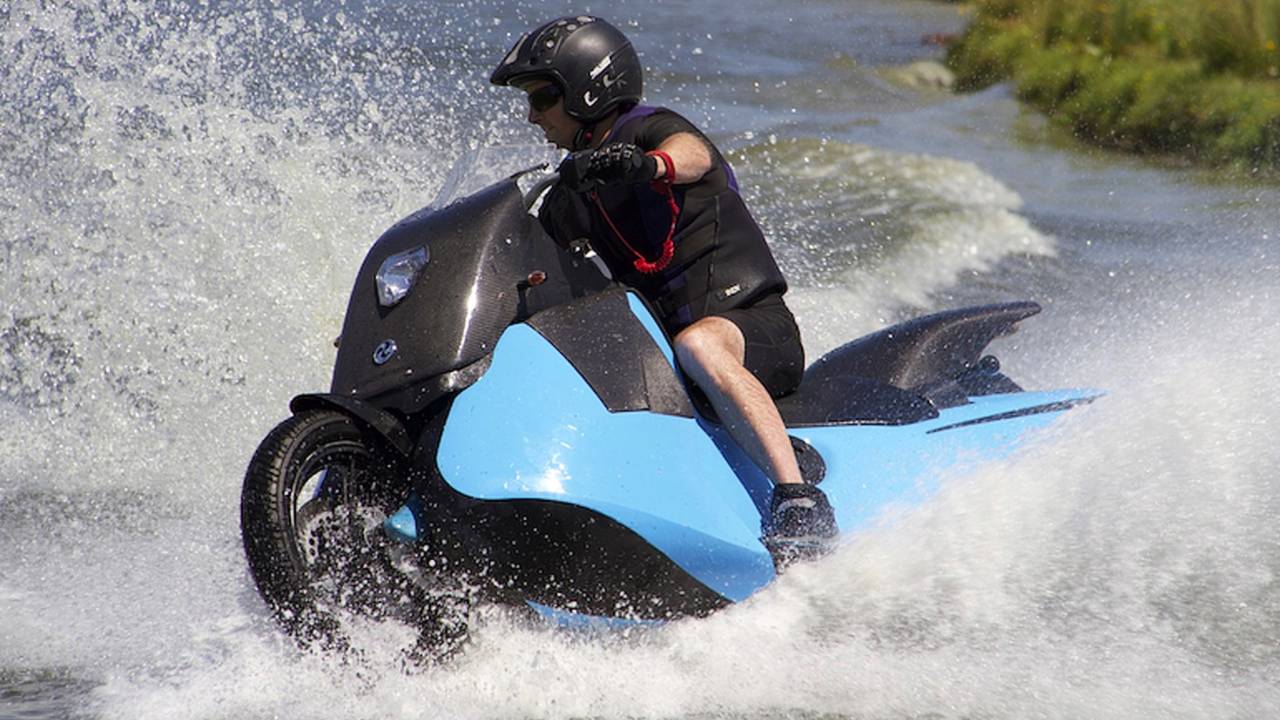 The weird amphibious scooter that nobody was asking for.

New scooter gives “handles like a boat” a new meaning.

Gibbs is one of those weird manufacturers you’ve probably never heard of before. The small marque’s philosophy appears to consist of taking “wouldn’t-that-be-cool?” ideas and making them into realities. Its latest creation is the Biski, a scooter capable of turning into a jetski at the touch of a button.

Gibbs’ goofy-looking new offering is powered by an unspecified, 55hp, two-cylinder engine capable of reaching 80mph on land, while Gibbs’ dual-jet technology enables the same engine to propel the Biski to speeds up to 37mph in the water. The Biski boasts hydraulic disk brakes fore and aft and fully-retractable rear suspension, another one of Gibbs’ proprietary technologies. The Biski also features a quad exhaust system with two land pipes sticking out above the rear wheel and another pair of exhausts towards the bottom of the bike for water use.

As you might expect, a dual-use powerplant, road and marine lighting, a 20-liter tank, and fully retractable suspension adds a few pounds. All that extra running gear results in a curb weight of just over 500 pounds despite a generous amount of carbon fiber. The total length of the amphibious two-wheeler is 92.5 inches, with a 70.5-inch wheelbase and just shy of 6 inches of ground clearance. The Biski is offered in a solo-saddle setup as well as with a passenger pillion.

The company has previously introduced the “Quad-Ski”, an amphibious ATV-jetski hybrid powered a 1293cc BMW K1300 inline-four engine as well as a marine jet drive propulsion system. The shaft drive amphibious four-wheeler featured a constant-mesh six-speed gearbox and an electric automated clutch made in-house by Gibbs. Because of its dry-weight of 1,180lbs, it topped-out at 45mph on both land and water despite its 145hp German engine.

READ MORE: Amphibious Motorcycle Side Car — Video of the Day

Aside from some very specific police and military applications, it’s hard to see who exactly the Biski – or any of Gibbs’ products – is for (It is also clearly for people who like things that are both awesome and ridiculous like me - JM). Pricing doesn’t appear to be available yet, but Gibbs' Quadski sold for around $40K, which suggests that the Biski will be far from cheap. Regardless, it’s a funny one. For anyone itching for more info on the Biski you can check out its website.