All that and a barrel of tzatziki for almost 40 years.

When you think of three-wheelers, you probably picture a trike, a Can-Am, or possibly a Yamaha Niken. Maybe even a Ural if you’re real retro-minded. Even if you like scooters, chances are excellent that they might not be some of the first things that come to mind in this category. That’s where you’re mistaken, friends—and the Honda Gyro is an excellent, long-lived example of why.

This leaning three-wheeler predates Yamaha’s (or almost anyone else’s) attempts at a leaning three-wheeled vehicle by a long chalk. First released in Japan in October, 1982, the Gyro and its variants have been in production ever since. They were briefly sold in the U.S. from 1984 to 1986, and in Canada for 1984—but they’ve remained popular in Japan and throughout Asia as workhorse scoots.

Watching it lean immediately shows you why it’s called the Honda Gyro. However, Team Red didn’t let the obvious stand in the way of crafting an absolutely terrible backronym to utterly pound that name into the ground. The original press release from 1982 stated that “G is Great, Y is Yours, R is Recreational, and O is Original.” If, like me, you first saw that explanation in some English-language writeups and thought it was just an unfortunate legend—nope, it’s all there in the press release. Nice work, 1982 Honda PR team!

Originally powered by an air-cooled, 49cc, two-stroke single, a Gyro in top condition is good for a blistering top speed of around 30 mph. Even the earliest ones came with limited slip differentials, but what makes the model particularly special is a linkage that lets the two rear wheels continue rolling forward, while the front part of the bike can lean independently to steer through corners. Genius! It works well for racing, too.

Now, here’s a thing you may not have seen coming—and it’s the bit where Honda borrowed (again) from a UK bike manufacturer. Back in the ‘70s, BSA came up with a three-wheeler design that made quite a few people question its sanity. It was called the Ariel 3, and as you can see in this charming video from perennial RideApart favo(u)rite On Yer Bike, a case can be (and has been) made that it helped sink BSA for good.

Anyway, Honda liked what it saw in that gyroscopic linkage design, and so licensed it for its own use. That license eventually led to the Gyro. Although different variations on the model came and went over the years, that 49cc two-stroke stayed mostly unchanged until 2008, when the Gyro X and Gyro Canopy—very commonly used as a pizza delivery vehicle—got bumped up to water-cooled four-strokes. They still kept displacement to 50ccs, but at long last—no more two-stroke headaches.

Today, you may see the occasional Gyro come up for sale in North America as a quirky rarity—but you can also regularly see them hauling stuff absolutely everywhere in many Asian countries. In October 2019, Honda introduced Benly E and Gyro E electric models with swappable batteries. It certainly looks like the Gyro will continue to be much more than just a sandwich for years to come. 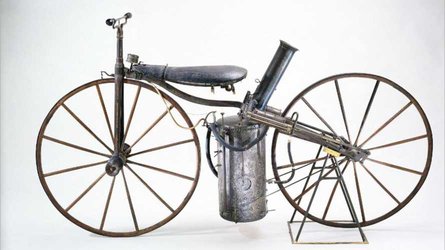 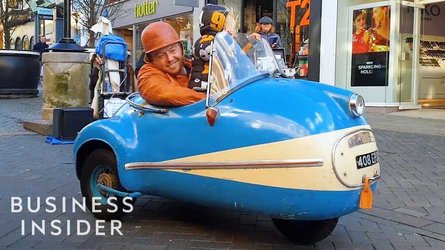