5 Tricks To Maintain Your Motorcycle On The Cheap 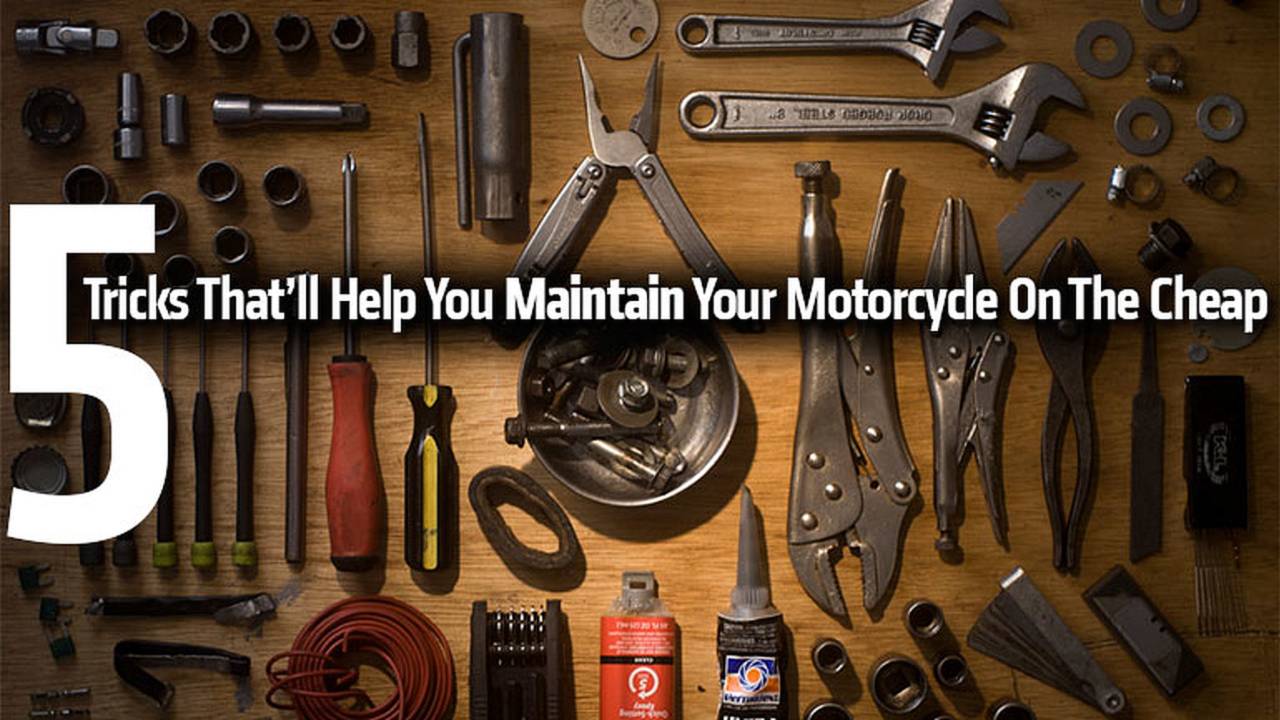 Unexpected or even routine maintenance can seriously blow your budget. It needn’t. Here’s 5 tricks that'll help you maintain your motorcycle on the cheap.

Photo by Will Engelmann

Aren’t motorcycles great? You can get something faster than a Ferrari for less than a new Ford Fiesta. Of course, the problem is going to be running it. If you’re stretching to afford a nicer bike than your budget should allow, unexpected or even routine maintenance can seriously blow your budget. It needn’t. Here’s how to maintain your motorcycle on the cheap.

So you’ve found yourself in one of those rare home-maintenance situations in which you need to get both wheels off the ground. Problem is, motorcycle stands cost money. If you’re already struggling to afford that new set of tires or just stretching to make the payments in the first place, a couple hundred bucks is just too much money to spend just to lift your wheels off the ground. But, a set of ratchet straps costs far less (maybe you already even have them) and, provided you have a suitably strong support to throw them around, are more than capable of lifting your bike off the ground.

Back when I was a broke college student, I’d throw a set under my headstock (so I was lifting from the main frame) and over a rafter in my parents’ garage. An exposed I-Beam or similar will work fine too. Just make sure both the straps and the rafter are capable of supporting the weight. Figure ~500 lbs for a nice round estimate. Oh, and make sure you loosen the bolts before you turn your bike into a free-swinging object.

2. Need to get home on a bald tire? Shoe Goo might just get you there.

A buddy was just over, telling me about how he spent six hours stranded in the middle of nowhere last weekend because he tried to complete a too-long ride on a worn-out tire. He was already down to the belts when he left, but just an hour later, he was sitting on the side of the road, using a Kriega tail pack as a pillow because his rear tire had totally let loose. Had he thought to pick up a tube of Shoe Goo and liberally slather it over the bald patch, he may just have made it home. Now, this faux rubber is hardly going to be good at grip or work at high speeds, but in a pinch, it might just get you that extra 60 miles or so.

3. Need to open a clutch cover? Find an old mattress.

Here’s a trick beloved of London’s bike couriers. Racking up huge miles leads to frequent clutch replacements. That’s actually an easy job, provided you can get the cover off without draining all the oil. Rather than pay a pro, the couriers just lay an old mattress on the sidewalk, then lower the bike onto it. Horizontal bike? Nothing’s leaking out while you’ve got the cover off, plus it makes it easy to just drop the new plates right on in.

4. Bleed your brakes overnight, every night.

Bleeding brakes isn’t exactly the hardest job in the world, but it turns out you can do it totally for free, if you’ve got 5 seconds to spare every night. That’s right, just find a thick rubber band and wrap it around the lever and bar every night when you park up. The idea is to get the lever fairly tight. Doing so will squeeze air out of the system, increasing the durations between proper bleedings. Easy as that.

Back when I got my first bike, I was imparted a little wisdom by a man named Gary, who ran the bar across the street. He told me to fit a ScottOiler to extend the life of my chain, keep it rust free and to reduce the need for adjustments. Well, even in rainy England that worked. I never once had to adjust a motorcycle chain, instead it was able to wait until new tires were fitted once every 5,000 miles or so. Seriously, it was three or four years into the whole bike thing before I had to get a friend just to show me how to do it, ScottOilers work.

Have you had to cut corners on a job to get it done? What were the results like? Tell us all about it.