How to Kickstart a Motorcycle 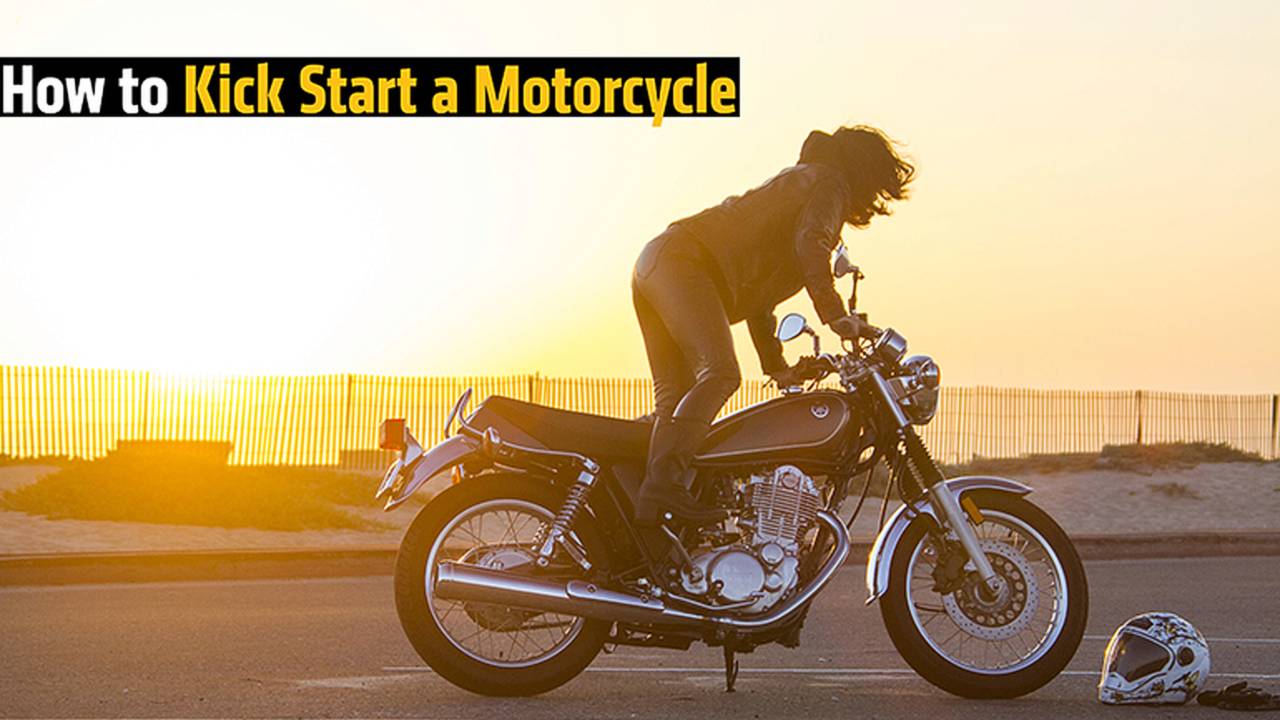 You will never be cool with the hipster guys and gals until you learn how to start a bike the old-fashioned way.

A kickstart lever is to a motorcycle like a bench seat is to a car: It's something modern vehicles don't have anymore, but a piece of nostalgia that's often missed. It was a sweeter time when gas was cheap and you couldn't start your motorcycle without working up a hard sweat.

Most modern dirt bikes have a kickstart, but road bikes have long since lost the kicker for an electric start, except for the occasional odd-ball like the 2015 Yamaha SR400.

Maybe a better analogy would be to compare a kickstart to a carburetor since many modern cars and motorcycles are missing the carbs. And equally so, there are fewer people who know how to handle carburetors. We've had the SR400 for a couple months now, and after watching some of the staff make terrible attempts at kickstarting the bike, we decided it was time for a refresher. (The SR400 is often an easy to kick bike that most of the riders were able to kick even though they didn't use the proper technique.)

Starting a motorcycle is far from a simple kick. Here is the explanation of how most motorcycles work (with some exceptions), and the proper technique that'll keep your ankles intact.

Chop Cult member @robert_taylor7 shows us the do's and dont's of kicking over a shovel. This is too funny, enjoy! #chopcult #33member #choppers #kickonly #chopperhumor #shovelhead

EVERYTHING about a motorcycle is about smoothness. An abrupt stab off the throttle or jab at the brakes can cause injury, and kickstarting a motorcycle is no exception. Doing it wrong can get you hurt. You never want to be abrupt or violent with your motorcycle, unless it's not running, then you can punch a throttle body or maybe a primary cover.

There's a mix of things noted in this story, as it's hard to determine the exact proper technique without knowing the bike. Take a look at the bike and notice what you have. Does it have a carburetor or throttle body? Also, does it have a compression release? If so, where?

A dirt bike requires you to straddle the bike—similar to a riding position—but a big bike, like a vintage Harley-Davidson, requires you stand on the side of the bike. Make sure you can perform a full kick, from whatever position you choose, without hyper extending your leg. And no matter your body position the most important thing to remember is follow-through.

How to Do it

First and foremost, when kicking, follow through. Kick mechanisms in general have a free spot at the bottom of the kick stroke. Always follow through with the kick stroke to the bottom and wait for the engine to cycle through to prevent a kickback. A kickback on a high-compression large engine can throw you over the handlebars or kill your shins. If you start to bring the kicker up, while the engine spins over or backfires, this could engage the gears and throw the kicker upward, causing injury.

First prime the engine, read the subhead Carb/EFI below, to explain how to prime the engine before kicking. The kicker should fall until you reach a firm place. Once it's firm and hard to kick, bring it back up to the top. You're on compression stroke now, this is your starting place. If you have a compression release, read Compression Release below.

Your method of kicking should be like punching: Don't punch and quickly pull back. Instead, punch through. Kick using your body weight (if you're straddling the bike like a dirt bike, lift your body off the seat and pegs), kick all the way through. Use the weight of your body, not the muscles in your legs. Remember to pause at the bottom and wait for the engine to bump over or kick back. You don't need strength to do this, but proper technique and a well-tuned engine…CONTINUE READING.

To index a spark plug, simply point the open end of the plug towards the intake valve using a marker to mark the nut on the spark plug. You can add a couple of spark plug washers to the spark plug to give yourself a little more turn.

If you have a point-ignition system you can also slightly increase the point gap. These items will create a slightly hotter spark. A good fully charged battery is needed to trigger the ignition system unless your motorcycle is equipped with a magneto. Magneto ignitions require no battery and create spark by magnets passing or spinning past a coil.

Few bikes have electronic fuel injection (EFI) and a kick starter. Motorcycles that are fuel injected require no priming as the fuel pump builds pressure and fuel is released when engine is turned over.

For those with carbs, note that a properly working carburetor pump will make kick starting your motorcycle easier. A carburetor that is adjusted slightly rich also helps with starting.

Most kick start bikes will require you to prime the engine: with the fuel on and ignition off, engage the choke, hold the throttle partly open and kick the engine over a few times. This will put vacuum in the carburetor, and thus prime the cylinder(s) with fuel.

If your carburetor is equipped with a pump, this is not necessary. A couple good twist of the throttle will squirt fuel into the intake; therefore, priming the cylinder (two twists is plenty, don't flood it). Also, you should always use the choke on a cold engine (even if partly).

If your motorcycle is equipped with a compression release use it. Some types require you to operate the compression release by a lever at the beginning of the kick start and then release it once the kick stroke has begun. Others are operated automatically by a cable or internal mechanism. Make adjustments to these types as part of your regular maintenance. Compression releases that are out of adjustment can lead to burnt valves and loss of performance.

Our SR400 has a compression release style lever that can be commonly found on Japanese bikes. It required finding Top Dead Center on the kicker, then engaging the compression release and kicking slowly for roughly 1/4 of the total throw of the kicker. Then, back up top with the kicker and you're ready for a full swing that will hopefully start the engine.

Also known as a kick-indicator window, this is a helpful indicator that tells you when you're ready to kick. Featured on the SR400 and on the original SR400/SR500 from 1978-1981, it's a window at the end of the cam cover at the top of the engine. Watch the video above. When the window is dark, you're on TDC. When you pull the compression release and slowly kick 1/4 of a turn, the indicator will show a silver indicator. This tells you that you're on the downward stroke and ready to kick.

Techniques vary a lot when it comes to the art of kicking the engine over. It's difficult to give a hard, fast method of proper body position for all motorcycles since all of them are slightly different. You may want to experiment with your technique by removing the spark plugs, and thereby lowering compression, making it easier for the engine to turn over.

If your motorcycle is equipped with a good kickstand, you may want to try putting your left knee in the seat and kind of step off with putting all of your weight into your right side as you push the kick arm through with your right leg.

Remember, when the bike is on the stand, don't put too much weight on the left side. Bouncing back and forth can snap a weak kickstand. If you have a center stand try to use it.