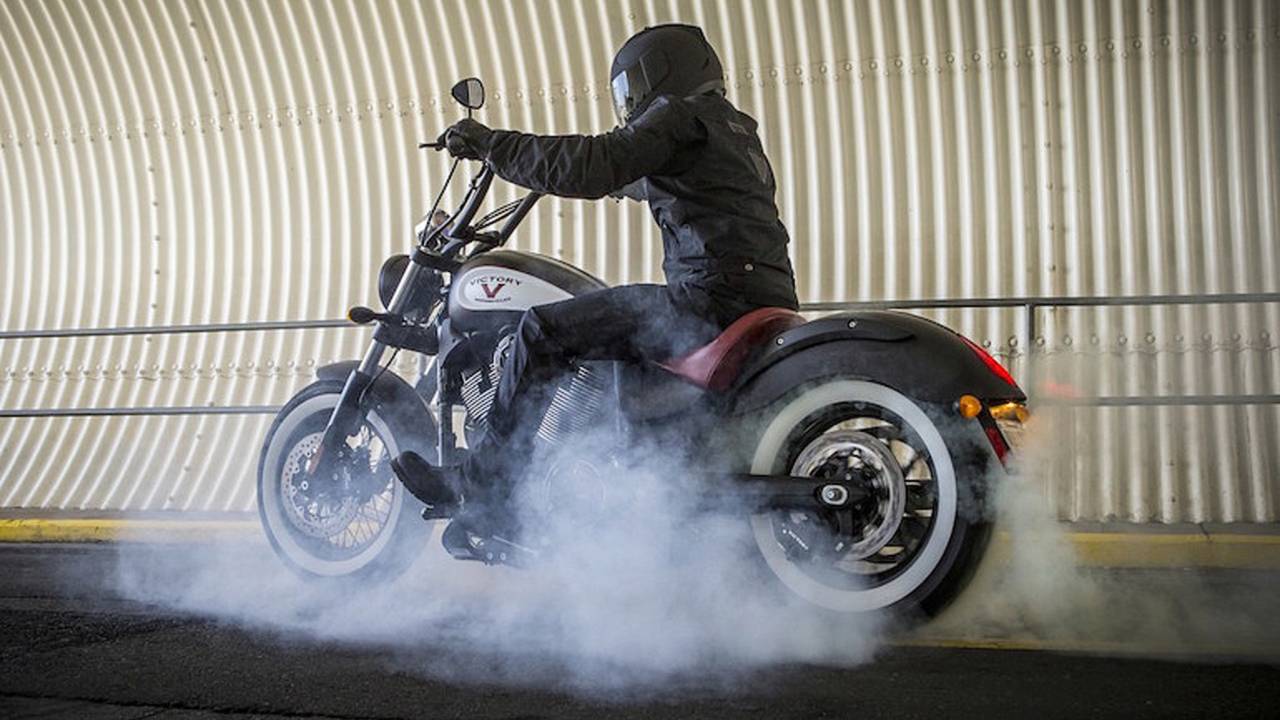 Victory Motorcycles is no more. Here's a look at what happened in Victory’s Obituary, written by our own, Chris Cope.

Many people will say they saw this coming; indeed, few will say they didn’t. This week’s news that Polaris has decided to close the doors on Victory Motorcycles may have surprised a few of us (as in, we had no indication this was coming so soon), but no one is shocked.

In the future I’ll probably tell people that I saw the writing on the wall way back in August 2013, when a resurrected Indian Motorcycle brand was finally unveiled to the world. Indian, of course, shares the same parent company as Victory – Minnesota-based Polaris. Thanks to the internets, I know that my first reaction to Indian’s new line-up was “The question I have now is: what happens to Victory?”

But in truth, I had hope for the brand – an eager, perhaps too-rosy optimism that it would finally be able to live up to its potential.

Victory Motorcycles was first formed in 1994, after Polaris market research suggested there was space in the motorcycling scene for another American manufacturer – a market for bikes other than Harley-Davidsons. (Arguably, H-D saw this same space, because it started investing in Buell around the same time) Three years later, in the summer of 1997, the brand’s V92 model was unveiled at an event held at Planet Hollywood in the Mall of America. Indy racer Al Unser Jr. fired up the bike and rode it through the restaurant.

The V92C was not the sexiest bike.

This is a charming beginning for a motorcycle – unveiled not at a trade show or bike rally, but at a celebrity-themed chain restaurant in a shopping mall by a B-list celebrity with no obvious connection to motorcycles. And it so very Minnesota; Minnesotans would think that was a good idea. I guarantee that at some point in the planning of the event someone, probably a woman with a name like Patty or Arlene, used the phrase “snazzy.”

“Oh yah, we want it to be real special, don’cha know. Really snazzy.”

A year later, on the 4th of July 1998, the first production model rolled off the line at Polaris’ Spirit Lake, Iowa, plant. The V92C was an ugly thing, but carried a good ad slogan – “It’s a free country. Act like it.” – and was well-engineered enough to pick up Cycle World’s “Cruiser of the Year” award.

I was a teenager at the time and although I lived in Minnesota – indeed, I went to high school in Bloomington, where the Mall of America is located – I wouldn’t actually hear about Victory for another decade. This inability to be seen, to reach beyond the immediate and too-tiny world of motorcycling insiders would plague Victory for the rest of its life.

In its 18 years of producing motorcycles Victory’s other major challenge seemed to be the one of figuring out its own identity. Was it just a Not Harley brand, creating cruisers for people who didn’t want to suffer the stigma and cost of Harley ownership? Or was it something more?

Designer Tiger Bracy sits on the Vision 800 concept, which is now displayed in his office.

Over the years there were glimpses of a company capable of delivering truly innovative machines. The liquid-cooled parallel-twin Vision 800 concept bike in 2005, for example. In 2008, the bike that inspired that concept – the visually stunning and still-fantastic Vision tourer – turned heads with its totally unique styling. A year later, the Victory Core concept again reminded riders that the brand had some very, very clever and creative folks working behind the scenes. More recently, the brand got all our hearts aflutter with its rip-snorting Project 156.

Perhaps because of the Minnesota connection, I’ve long felt an affinity for Victory. I’ve probably mentioned that returning to motorcycling helped pull me from a long period of personal decline. I used to have a picture of a Victory Hammer 8 Ball taped above my desk to inspire me. The first time I actually got to test ride a Victory – a Judge – I was so excited my face went numb. The dealer gave me a Victory keyring which remains one of my most prized possessions.

In recent years, when people have criticised the brand I have held firm and pointed to its innovative moments as proof of what it could be, of what an American motorcycle company can be. But I will admit that’s become more and more challenging in recent years. I first started to feel concerned in July 2014, when Victory unveiled its 2015 model-year line-up – a line-up that was different from the previous year only in paint and the addition of the god-awful Magnum. Sharing its name with a line of condoms and an ice cream bar, the Magnum was just a Cross Country that had been aesthetically damaged by someone who’d seen too many episodes of “American Chopper.”

By that time, Indian had been on the scene, going from strength to strength, for almost a year and was on the verge of unveiling the new Scout. Polaris Vice President Steve Menneto had told Forbes that resurrection of the Indian brand would set Victory free "to really go all out" in the fields of "performance and innovation" – but Victory fans would have to wait until 2015 to see evidence of that.

In its 17th year of operation Victory seemed to be on the verge of a renaissance; it invested in NHRA racing, it competed at the Isle of Man with an electric motorcycle, and, of course, there was that beautiful Project 156 monster. Admittedly, no new production models showed up, but late in the year, at EICMA, Victory revealed the powerplant for a model to be unveiled in 2016.

That model turned out to be the Octane, which I suspect history will see as Victory’s undoing. Appearing to be nothing more than an Indian Scout adorned in primer grey, the Octane turned out to be a publicity disaster. Many folks had expected a street version of Project 156, with teaser videos making direct connections between the Pikes Peak-climbing moto and this new model. All the initial buzz for the bike ended up being not about the bike at all, but about how the PR team had goofed. Later, reviews of the bike were generally positive but always overshadowed by what the bike wasn’t. It wasn’t a naked or a standard; it wasn’t the break from America’s cruiser-centric scene.

A few months later, Victory didn’t even have a stand at EICMA – a major event held in Italy, which is one of Europe’s biggest cruiser markets. I should have read the writing on the wall there. I should have picked it up from the fact that when I spoke to Gary Gray, Polaris’ product director of motorcycles, he really only spoke about Indian. Maybe the decision hadn’t yet been made back then, but it’s clear now things were headed that way.

And, as I say, there aren’t too many people who are shocked. Checking a Victory owners’ page on Facebook I found that most of the comments expressed a mood of resignation.

Most say they’ll hold on to their bikes for as long as there are parts. Polaris has promised 10 years of support, and I suspect parts and service will remain available for a good few years after that. Many are seeing this as an opportunity to get a Victory at an even more affordable price. I’ll admit I will be keeping my eye on the price of Gunner models over the coming months.

RideApart contributor William Connor has owned two Victory bikes in the past and says “knowing that Victory is coming to an end is bittersweet,” but that “as a current Indian owner I contributed to the end of Victory.”

Related to that, Victory also contributed to the end of Victory. Indian Motorcycle makes very good bikes. In a short period of time it has delivered a number of benchmark machines – motorcycles by which all others in the genre are measured. It has been able to do that because it has been able to build on Victory’s knowledge and experiences.

It seems almost certain that Indian will continue to do so. The Octane experience showed that in order to survive Victory needed to change dramatically; it needed to sink far more resources into much bigger risks. But Polaris is a company that’s presently struggling with “an environment of finite resources,” in the words of CEO and Chairman Scott Wine. The motorcycles division is about the only part of the company turning profit these days. This is not a time for big gambles.

The demise of Victory will inherently benefit Indian. No more need to split loyalties and resources. And maybe one day in the not-too-distant future, some of the dreams we had for Victory will be realized by the Indian brand – a brand that has a name strong enough to take bigger risks. I’ll be cheering them on, but quietly I’ll also carry a soft spot for the little motorcycle brand from Minnesota that tried to change the moto world.