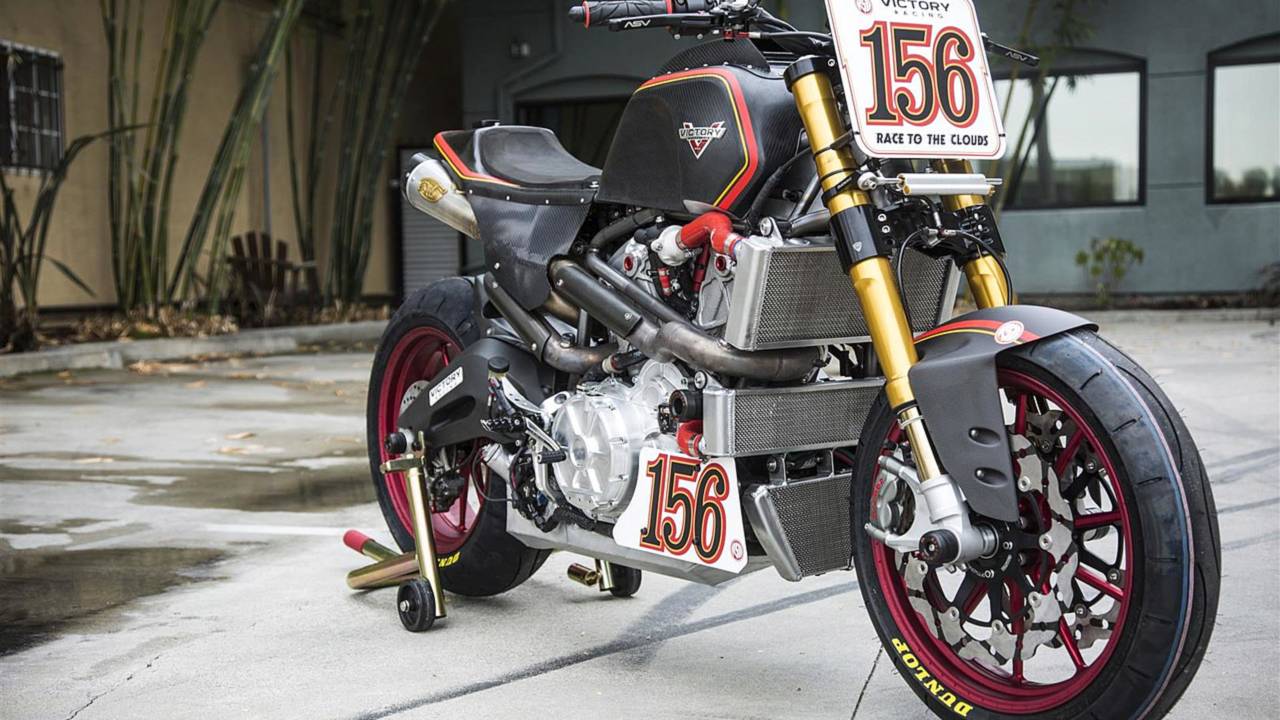 Later this month, Victory Motorcycles Racing will debut its Project 156 special at the 2015 Pike’s Peak International Hill Climb (check out the website at: http://www.ppihc.com/ ).

Victory and Roland Sands Designs (RSD) are collaborating on a purpose-built racing bike that features a prototype Victory motor.  The chassis and nearly everything else is hand-built, specifically for the challenges of the Pike’s Peak International Hill Climb.

The bike features a liquid-cooled engine and will be piloted by Cycle World Road Test Editor Don Canet. The company says this engine represents the future performance of the Victory brand.  It features Twin 67mm intake throttles with downdraft runners for maximum power and torque as well as a performance valvetrain that includes titanium intake and exhaust valves to allow for maximum engine speed.

MUST READ:  Victory and Roland Sands Designs join forces For Project 156 Race to the Clouds | RideApart

“We have an intense focus at Victory Motorcycles to prove the performance of our vehicles,” said Rod Krois, Victory General Manager. “Competing as an American OEM at America’s race is an exciting opportunity. The grueling conditions at Pike’s Peak provide the perfect proving ground for our new Project 156 race engine.”

MUST READ:  Driver Runs into Motorcyclist, After He's Told to Stop Texting | RideApart

The Roland Sands Design team developed and built the chassis to cradle the Project 156 motor. “This truly has been an All-American effort,” said Roland Sands. “The Race to the Clouds is a legendary event and we couldn’t be more proud to partner with Victory on the endeavor. We’ve built lots of custom motorcycles, but building a purpose-built race bike for this project has been a unique experience that we’ll remember for a long time.”

To coordinate with the Pike’s Peak International Hill Climb, Victory Motorcycles has moved the 2015 American Victory Rally to Colorado Springs, Colorado from June 25–28.  Victory owners can visit http://vic.mn/AVR for more details on that.

MUST READ:  How to Buy a New Motorcycle - From our Anonymous Dealer, Part 1 | RideApart