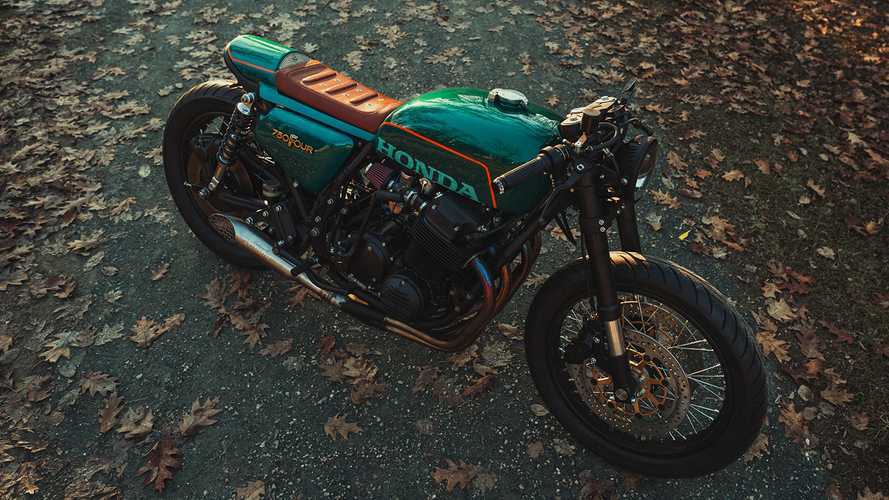 A rather tasteful build.

I am not the biggest fan of heavily themed custom. So when I came across this custom Honda CB750 themed after DC Comics’ Green Arrow, I had my doubts, and quite frankly, expected to see something rather gaudy or tacky. Thankfully, I browsed through the photos and was pleasantly surprised.

Undoubtedly, custom motorcycles are not for everyone. Even more so when the bike in question holds the same heritage as the Honda CB750, which was actually inducted in the Japanese Automotive Hall of Fame. Nonetheless, custom motorcycles are a very important part of motorcycle culture because of the way they allow individuals to inject a unique sense of personality into something that’s inherently exciting. So in as much as custom motorcycles can be a divisive force, they too can be cause for celebration in terms of individuality and uniqueness.

The 1978 Honda CB750 showcased here is definitely an example of individuality and uniqueness, in a way that doesn’t come across as overkill, and manages to stay true to its retro styling. Austrian bike builder National Custom Tech (NCT) is the company behind this custom machine. Dubbed the Green Arrow, this custom CB750 is in no way trying to hide the inspiration behind its design.

The team at NCT started off with a stock 1978 Honda CB750F. Before going at it with the custom paint and bodywork, the team rightfully opted to refresh the bike’s mechanical aspects. They tore the bike down to its bare frame, rust proofed and powder-coated the subframe and swingarm, and ultimately refreshed the engine. A bespoke four-into-one exhaust system not only looks the part, but really brings the inline-four sound to life.

Apart from the engine and frame, the guys at NCT also updated the CB750’s suspension with a pair of adjustable YSS shocks at the rear, and an inverted Showa fork. A dual front disc brake system was also fitted to give the bike more stopping power, and of course, an unmistakable neo-retro look.

The bike’s cockpit was updated with a bunch of high-spec goodies such as LSL clip-ons, a Rizoma brake fluid reservoir, Brembo levers, a Tomalley Daytona throttle assembly, and Motogadget grips. The bike is also equipped with a keyless ignition system and anti-theft alarm.

Now that the bike’s technical side has been sorted out, the team focused their attention on the paint scheme. Rather than bore you with the specifics as to how the bike draws its design inspiration from a certain popular hooded superhero who has a fondness for shooting arrows, we’ve included a bunch of photos for you guys to feast your eyes on.

What’s your opinion on custom bikes like this? Beauty, indeed, is in the eye of the beholder. And this custom Honda CB750 surely counts as beautiful in our book.