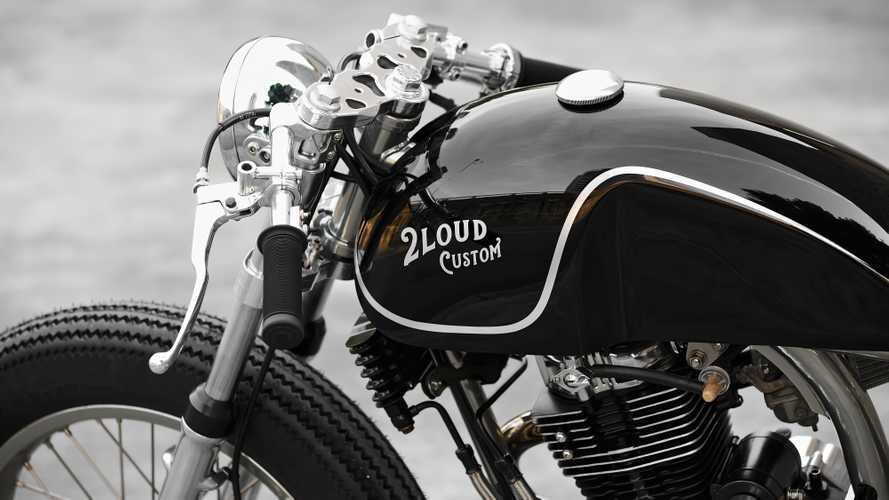 Hold the glitz and glamour.

The scooter is king in Taiwan. From the hustle and bustle of Taipei to the gritty streets of Khoasiung, there are nearly 15 million registered scoots in the country. Whether it’s the clatter of a Kymco or the electric whir of a Gogoro, the cacophony of scooters overwhelms any motorcycle roar on the roadway. Despite the preponderance of scooters, Taiwan does have a vibrant custom motorcycle culture with popular aftermarket brands like Mooneyes Taiwan in Khoasiung and Winston Yeh’s Rough Crafts. Based in New Taipei City, 2Loud Custom continues to push Taiwan’s custom community into the next decade with classic designs.

Max Ma opened 2Loud Custom in a small commercial space in 2013. Since then, his builds have graced the pages of BikeExif, The Bike Shed, and Silodrome. Along with the recognition of publications, Ma received numerous awards from Mooneyes Taiwan during the annual Ride Free custom show. It’s 2Loud’s refined blend of brat style, scrambler design cues, and cafe racer aesthetics that brought Ma so much attention in the past few years and brought me to the shop’s doorstep earlier this month.

Surrounded by auto repair shops in a quiet residential quarter of New Taipei City, 2Loud Custom sits at the bottom of an apartment building. A fortress-like military reserve looms across the street and grandmas pick up their grandchildren from a preschool a few doors down. The area is decidedly blue-collar, and 2Loud Custom’s shop fits in amongst the neighborhood’s hard-working residents.

Of course, when I arrived Ma was hard at work. He fiddled with the carburetor of a Hartford cafe racer while his partner laced a set of spoked wheels. As I walked up, I expected to see Ma’s custom Honda CB1100 or his street tracker take on Kawasaki’s W800, but they were nowhere in the shop. Instead, new projects like a Triumph Bonneville Bobber and a hardtail Sportster cluttered the space. Thoroughly consumed in work, both builders sat in silence as I disrupted the Zen-like atmosphere with a poorly pronounced, “ni hao!”

When Ma joined me, we chatted about past builds like his Honda Monkey chopper but quickly moved on to his current projects. He proudly pointed out pictures of his Harley bobber and BMW R nineT projects but didn’t mince words about the direction of 2Loud Custom. For Ma, resting on the laurels of his past builds isn’t an option.

“I started here seven years ago,” said Ma, gesturing to his small workshop. “I plan on moving to a bigger space this year.

However, getting to the next level isn’t paved with award-winning custom builds alone and a row of small-displacement motorcycles, and of course, scooters, lined the front porch of 2Loud Custom.

“Scooters are our everyday workhorse,” admitted Ma. “Motorcycles are more for fun.”

In a country where two-wheeled vehicles are banned from highways, Ma’s explanation couldn’t make more sense. You wouldn’t ride a prized horse to work and a scooter’s handling, fuel-efficiency, and narrow profile make them the perfect beasts of burden for the urban landscape.

No, there is no replacing the scooter in Taiwan but Ma will continue to push the envelope with 2Loud Custom. If the dirt bike project parked in the corner of his shop is any clue to his future direction, we can’t wait to see what he cooks up in 2020.