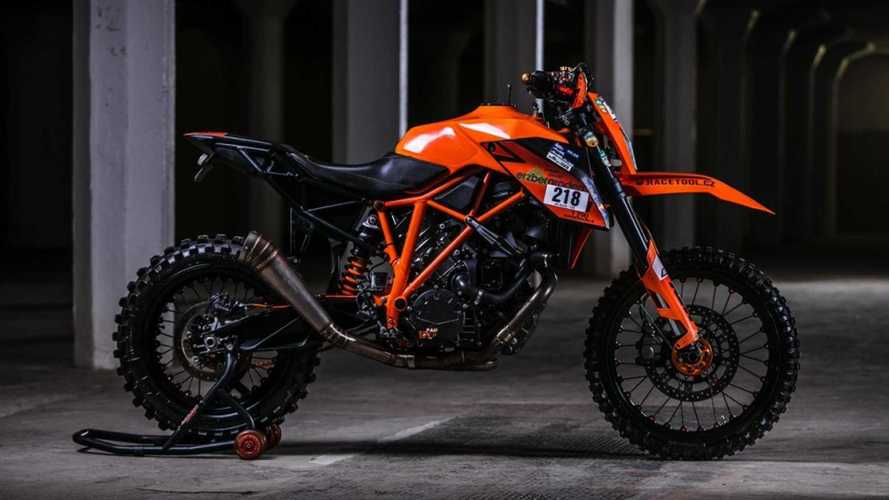 KTM is one of the leading off-road motorcycle manufacturers in the world. With a rich history of dirt racing, the Austrian company produces a standout motocross lineup, road-legal enduros, and high-spec adventure bikes. However, KTM’s standard offerings don’t always provide the best solution for the extremest off-road conditions. Held annually in Austria since 1995, the Erzberg Rodeo contains such conditions and long-time racer Jiří Heiník knew he had to up the ante for the event. Heiník certainly raised the stakes by transforming a KTM 1290 Super Duke R into an enduro bike.

Austria’s Erzberg pits man against mountain as 1,500 competitors vie for 500 entry spots on one of the toughest off-road courses ever conceived. From climbing the face of an iron ore quarry to navigating the gnarly gravel racetrack, racers need equal parts bravery and endurance to surmount the Iron Giant. All that courage and stamina can’t help you cross the finish line if your bike isn’t up to snuff, and Jiří Heiník knew one KTM that wasn’t lacking in capacity.

Starting with a 2015 KTM 1290 Super Duke R, Heiník enlisted the team at Race Tool KTM in Prague to help transform the Beast. First, the builders swapped the Super Duke’s road-biased suspension for the off-road capabilities of the 1290 Adventure’s 48mm fully-adjustable front end. With a new set of larger diameter Kineo rims wrapped in knobbies, Heiník’s Beast was ready to eat some dirt. To complete the enduro aesthetic, the team reshaped the tank, added handguards, mounted a high fender, and replaced the headlight cluster with a streamlined motocross unit.

The weight-savings helped the hyper-naked become more manageable in the dirt while retaining the devastating power of the Super Duke’s iconic engine.

“The goal was to build it as light and as thin as a single-cylinder bike,” said Heiník, “but with the devastating power of a fully-tuned LC8 engine.”

Heiník raced his Beast in the Desert Bomber twin-class of the Erzbergrodeo 2018. We doubt KTM will consider adding an off-road variant of the Super Duke to its range, but it’s cool to see it is possible.