The Rad Motorcycles Of Radwood Boston 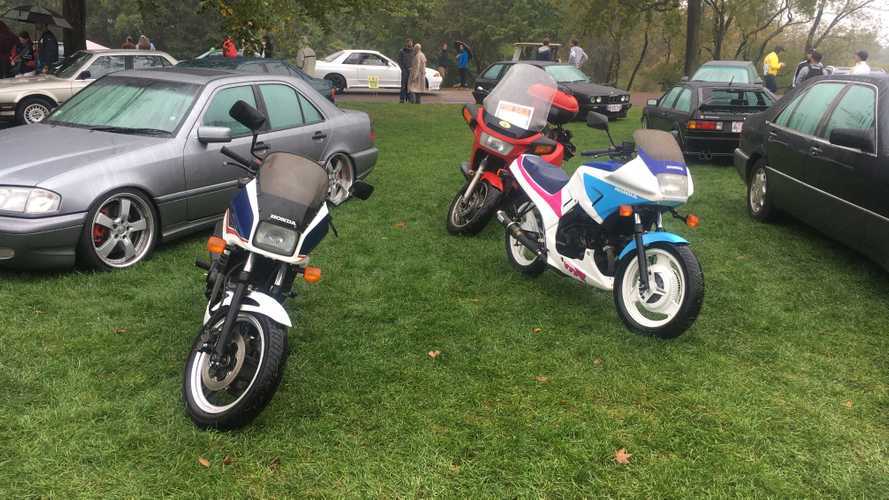 The celebration of 80s and 90s vehicles hit the Bay State and includes bikes as well as cars.

Radwood, the celebration of 1980s and 1990s vehicles, costumes, and culture, has grown in popularity from a single show to a series spreading all over the US. Saturday, October 12, marked the first time Radwood has visited the Boston area, taking over the lawn at the Larz Anderson Auto Museum in Brookline, Massachusetts. While the vast majority of rad rides on display are cars, Radwood welcomes motorcycles from this era as well. as Bryan showed us last winter. My wife and I hopped on my Rad-worthy Honda Pacific Coast 800 and went to check it out.

It was dry when we left home, but as we approached the coast the mist turned into a steady light rain. We figured this would put a serious damper on attendance. I'm happy to have been proven wrong. Only seven motorcycles showed up, and half of those were trailered in due to the weather, but the Radwood team found themselves stashing cars in every corner of the facility they could find. I had a blast checking out many cars I haven't seen since my youth, as well as some I've never seen outside a game of Gran Turismo 2. But since this is a bike website, I'll focus on those.

We were the first bike to arrive, and with the rain, I was wondering if we'd end up being the only one— a shoo-in for the Raddest Motorcycle award. Fortunately a few others showed up, a pair of Honda Interceptors of the VFR and smaller VTR variety. Later I saw a tiny Honda moped rolling in, who I invited to join us in our little Honda parking area.

Gallery: The Motorcycles Of Radwood Boston

On the other side of the V12 Mercedes parked next to us, another group of bikes rolled in, consisting of a Honda Magna, a Kawasaki Concours, and a Yamaha I couldn't identify. I enjoyed checking out the Magna, which looked just like one I almost bought once, except that it wasn't all smashed up on the left side—the reason I didn't buy that Magna and got a CB750 Custom instead. I also liked checking out a Concours of similar vintage to my own PC800. It was the Concours that drew most buyers away from the Pacific Coast, being both more normal looking and less expensive than my bike at the time.

We wandered around all day and stuck around until the awards. The rain stopped mid-morning, making the rest of the day a pleasant if slightly chilly experience. The Raddest Motorcycle award went to the little Honda VTR250 parked in front of me, no doubt due to its totally rad white, baby blue, and hot pink color scheme. It's certainly worthy of the award, both for its looks as well as what it is, the quintessential entry-level sportbike of the time.

After the awards, we took off and enjoyed a much more dry ride home. It was a great time, particularly for someone like me who grew up in the 80s and 90s (though I was amused to see many people there just as into it as we were who hadn't even been born yet at the time). Radwood assures us that it will return to the Boston area next year. Whether I still have a totally rad bike to show or not, I plan to be there.