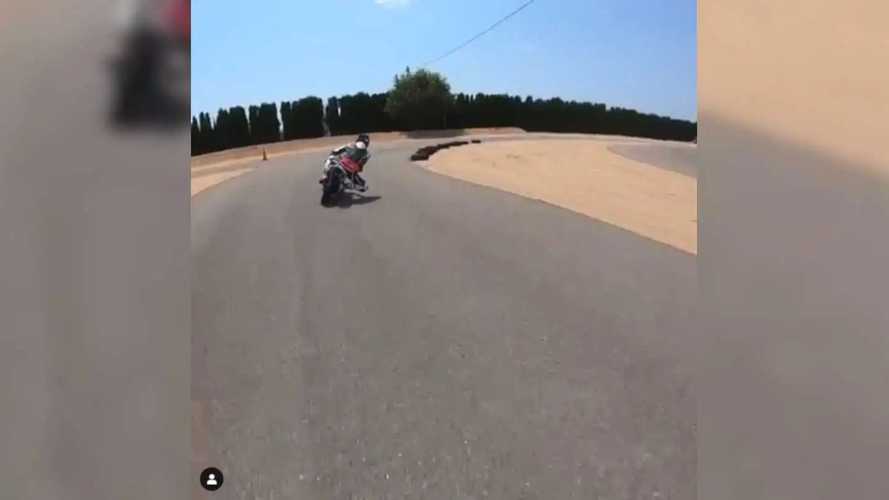 Going fast is fun, even on tiny bikes!

There are few things more fun than watching grown adults of average adult height tear around on minibikes. That is, unless you’re one of those adults, of course. The next best thing has to be watching Renault Formula One driver Daniel Ricciardo flick a pocket bike around two-time MotoGP world championship runner-up Sete Gibernau’s private test track in this video he posted to Instagram.

Donuts with Sebastian Vettel and Talking Motorcycles with Daniel Ricciardo

Ricciardo, who is 1.75 meters tall (just over 5’7”) according to the Australian Broadcasting Corporation, looks like he’s having a fantastic time. Then again, if you had the opportunity to receive such expert training, you would, too.

Alpinestars arranged the meeting, and Ricciardo talked to Crash.net about his history with motorbikes.

“As I got older, I think I gained a bit of trust and started doing a bit more dirt bike riding and stuff, but I never did road bike riding,” the Renault F1 racer said.

“That’s one thing Mum would never let me have, a road bike, and I didn’t really want one because it is quite dangerous with other people on the road, but I thought if I ever get the chance to go on a track, that would be awesome.”

"Getting back with Alpinestars this year, they were like ‘you have to try it.’ They set it up with Sete Gibernau, and we rode at his private track. Little 100cc bikes, so nothing crazy, but it was enough to learn how to use your body a bit and slide the knee. It was so, so cool … Everyone says race car drivers, we’re brave and crazy, but two-wheel guys are completely on another level. They are another level."

As his IG caption, Ricciardo simply wrote, “Road trackin’ for the first time. Loved!” Still, that doesn’t mean he’s looking to get onto bigger bikes any time soon. He did tell Crash.net that he’d love to get more minibike experience, however—and if he does, hopefully he’ll share more videos like this with the world. To read the entire interview, head on over to Crash.net.