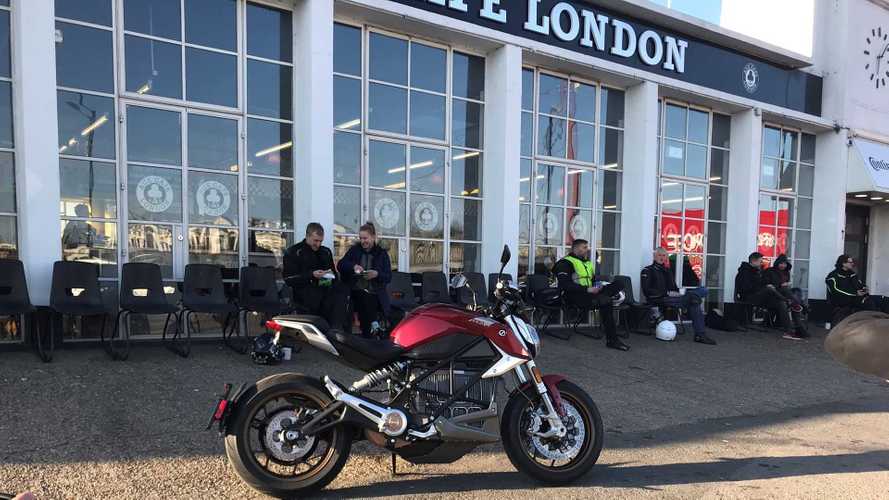 We got the chance to see in person the new SR/F, and it's a real beast!

Zero Motorcycles may be one of the most exciting new brands in the motorcycle world. Set on transforming the electric bike from concept artwork to reality, the California-based company has since 2006 been creating fast, great looking and well performing electric bikes, which are genuinely practical in the real world. Zero has been teasing the SR/F for a while now, but we got the chance to look at the new bike in person at London's Ace Cafe, at a Showcase held on Wednesday, April 10, 2019.

The Zero we saw was actually a pre-production model, which had been shipped from European Union type approval testing in the Netherlands two days before. There was a lot of buzz and excitement about the new bike at the Ace, which is a bit of a mecca for British bikers. The prototype is the first SR/F to reach UK shores, and still possessed a Dutch number-plate.

Zero's UK manager Dale Robinson was very excited about the bike, and said that it was the RC30 of electric bikes. He also said that Zero was normalizing electric bikes, and was hoping to attract a younger audience.

The prototype bike was finished in a great looking red paint scheme, and the specs we were given stated that the bike produced 140ft/lb of torque. (Very impressive, especially when compared with the Yamaha R1, which pushes out 80ft/lb.) The range in the city was quoted as being 140 miles and the bike's 0-60mph time is around 3 seconds. The bike weighs 485 pounds, however, that weight is very close to to the ground as evidenced in the photos. The bike contains a dual USB charger equipped storage compartment where the fuel tank would be, and with the fast charge option can be fully charged in around 40 minutes.

(We'll have more SR/F news for you real soon. Including, we hope, an actual ride/review. So, you know, stay tuned -Ed.)