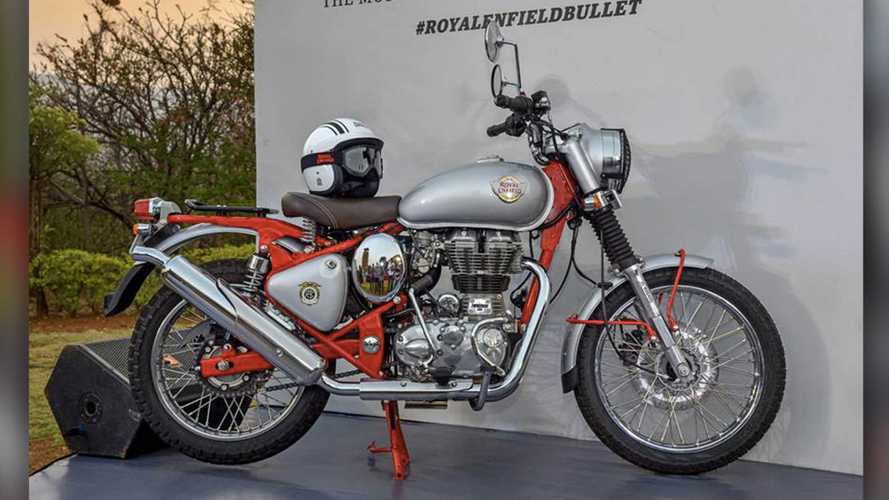 RE is adding more off-roading to its lineup.

After a healthy amount of speculation and a teaser that gave us a taste of what was to come, Royal Enfield has finally unveiled its new scramblerized Bullet 350 and 500 Trials. The brand introduced the two new variants of the well-known model Tuesday.

Though Royal Enfield has a knack for a perfectly good retro look with modern trimmings, the company hasn’t fallen for the “café racer” or “scrambler” gimmick as hard as other brands have. Last summer, spy shots of what was seemingly a new Royal Enfield scrambler spotted at an Indian dealer leaked and sparked the rumor that there was potentially a new model was in the works. Then more recently, we got a quick peek at what was actually in the works in a very “splashy” video. That’s when we learned that “Trials” rather than “scrambler” was the path Royal Enfield had taken.

We finally got to have a proper look at the new Bullet 350 and 500 Trials as the company officially unveiled the new models. In this case, “trial” is used not to refer to the seat-less type of motorcycle used in interior obstacle courses, but rather to the original sense of the term adopted in the 1960s and referring to extreme off-roading courses.

Appropriately, the Bullet Trials come equipped with the necessary features to be more off-road friendly than their standard counterparts. The base for the Trials is the same as the standard models—the frame, 346cc/499cc powertrains, and output numbers remain unchanged. Design-wise, they borrow the gas tank and side plates of the Bullet lineup.

Where the Trials differ in styling is in the headlight design, the higher-set handlebar, the shorter wheel guards, the upswept muffler, a spring-mounted saddle, and a luggage rack replacing the passenger pillion. Both the 350 and the 500 receive a 19-inch wheel at the front and an 18-inch wheel at the back, paired with a set of Ceat tires. The 350 receives a contrasting red tubular frame while the 500’s is painted green.

Because these are Bullet variants and the model isn’t offered on the North American market, there is no say whether we’ll get to see the models over here at all. We can always hope a Trials version of the Classic is heading our way. In the meantime, we get to appreciate just how cool they look!