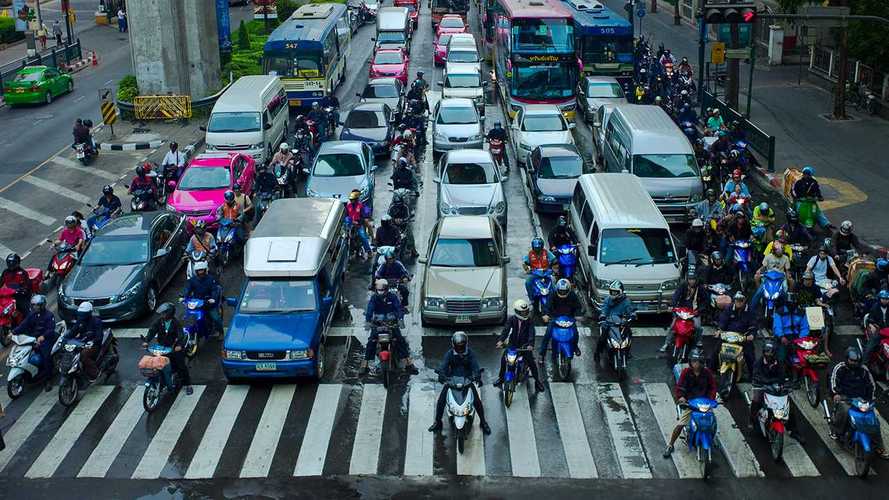 It's all a question of speed.

Over the course of the past few weeks, a number of States have kickstarted 2019 by opening discussions about the possibility of making motorcycle lane splitting or filtering legal. Utah officially became the second state after California to pass a bill allowing riders to engage in some form of lane sharing maneuver. However, while California has been allowing lane splitting since 2017, Utah has instead passed a law allowing lane filtering.  While “lane splitting” has been a widely accepted term in the US to refer to most of these maneuvers, there are actually subtleties that differentiate them. So, what’s the difference between lane splitting and lane filtering anyway?

The State of California defines lane splitting as “A motorcycle ridden between rows of stopped or moving vehicles in the same lane including on both divided and undivided streets, roads, or highways.” If we’re going to oversimplify it, it’s pretty much turning the dotted line into a temporary, miniature express lane for motorcycles.

Of course, there are conditions to lane splitting and contexts in which it represents a safe maneuver. In California, for instance, riders should not lane split faster than 10 mph above the speed of the surrounding traffic, adding that a higher speed differential represents a safety hazard. Lane splitting is discouraged when the flow of traffic is faster than 30 mph and it is recommended that riders white-line between the first and second lane (left and middle lanes of a three-lane highway) as this is usually where drivers are the most aware of the presence of motorcyclists. The lanes furthest to the right see a higher volume of lane-changing vehicles because of on and off ramps, among other things.

Lane splitting becomes a fuel-saving, rider-protecting maneuver especially in instances of stop-and-go or rush-hour traffic. While in California, lane splitting is allowed on all roads, some states that are currently considering legalizing the practice have an additional clause regarding the type of road the maneuver will be legal on. For instance, the State of Oregon recently submitted a bill that suggests lane splitting be allowed on roads with a posted speed limit of 50 mph and above.

Utah recently passed a bill that allows riders to lane filter in very strictly described conditions. The State of Utah now allows "lane filtering if a motorcycle is overtaking a vehicle that is stopped in the same lane of travel and there are two or more adjacent traffic lanes in the same direction of travel.” For the State of Oregon's recently submitted bill, lane filtering is allowed when "Traffic is stopped or has slowed to a speed of 10 miles per hour or less."

Unlike lane splitting that allows a motorcycle to navigate between rows of vehicles circulating at regular speeds, lane filtering allows the motorcyclist to trickle down between rows of stopped/slow-moving vehicles. This maneuver is usually observed at stop lights and allows riders to navigate towards the front of the line, which in turn allows them to take off swiftly and safely without being sandwiched between two vehicles.

Lane filtering is usually forbidden between an ongoing traffic lane and a row of parked cars or a curb. Each State has its requirements and its definition of lane filtering (for instance, Utah clearly states the vehicles have to be stopped while a wider definition of the concept also suggest slow-moving vehicles.)

The difference between splitting and filtering all comes down to the speed of the surrounding vehicles and the context in which they are best practiced (rush hour traffic versus intersections). In both cases, it is up to the rider to analyze the situation and engage safely.

A rider needs to make sure they have enough space between the vehicles to travel without ripping off mirrors along the way, and it is their responsibility to travel at a speed that affords them enough time to react should a car suddenly change lane in front of them. A rider is not obligated to lane split or filter if he doesn't feel at ease doing so.

Lane splitting and filtering are privileges, not God-given rights, so use these advantages wisely and above all, be safe doing so! Happy riding.