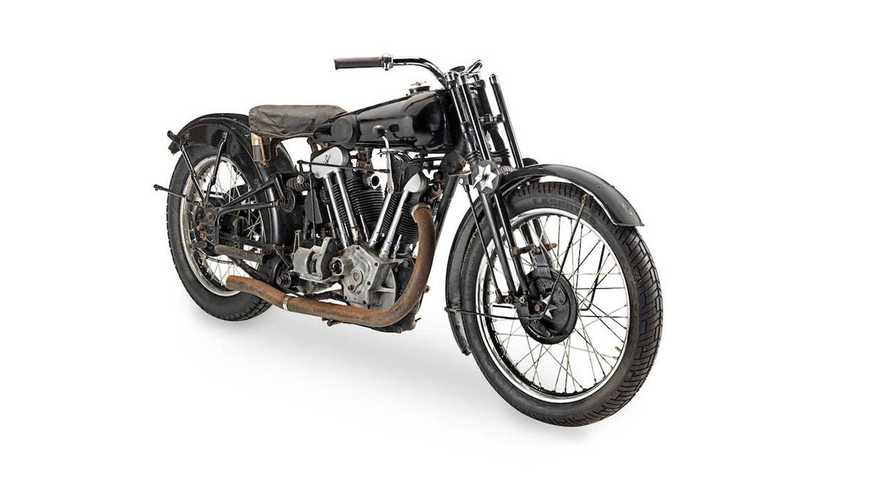 Definitely a diamond in the rough

Once upon a time, there was a young woman from South London named Jean Knight. Back in the early 60s, Mrs. Knight decided she needed a new set of wheels because she found the commute to her North London job untenable due to an unreliable public transit system. She couldn't afford a car (who could?), so she decided that since she was an avid cyclist she'd buy herself a motorcycle. Good plan? Great plan!

George Brough in action on his own Brough Superior
⠀

As it happened, a friend of Knight's was selling the contents of a garage. Along with a plethora of parts, tools, spares, bits, and bobs, the garage was home to a 1933 Brough Superior SS100 sidecar rig. Her fiance bought the contents of the garage, bike and all, for £45 and sold her the Brough for £33 (the equivalent of about $900 today). Now, that wasn't chump change at the time—especially for a young working woman with a wedding coming up—but still, that buy ranks up there among the best barn find bargains of the 20th century.

For those of you who might not know, the Brough Superior SS100 is one of the OG British superbikes. Designed and manufactured by George Brough in Nottingham, England, the SS100 was powered by a 998cc air-cooled, twin-cam, JAP V-twin mated to a three-speed transmission with a jockey shift. It had a girder front end and, from 1928 on, a fancy-shmancy rear suspension. Each one was essentially hand-built to the customer's specifications, and they were known officially as the Rolls-Royce of Motorcycles. They were big, powerful, extremely fast, and incredibly handsome machines in their day, but by the time Knight dug hers out of the back of that London garage they had long since been made obsolete by lighter, faster, higher-tech bikes from Triumph, Norton, BSA, and others.

It was still a hell of a good bike at a hell of a good price, so Knight immediately removed the sidecar and set about learning how to ride it. Since it was her first motorcycle, she decided to spring for a RAC motorcycle training session.

“I couldn’t praise the course highly enough," she said. "All of the instructors wanted a go on my machine, and they put me on a Tiger Cub to start the lessons with, even though I’d ridden to the course on my Brough in the first place!”

Knight rode her Brough all over England, indeed all over Europe, for years until finally, after having her second child, she finally hung up her leathers. It should be noted, that she did so under duress and at her husband's pleading.

“I agreed to save our marriage!” she said. “I think he worried about me an awful lot. In the end, we got a car, which was more sensible, and the Brough was for high days and holidays only.”

One day in the early 70s, the old Brough was put away in the shed and didn't come out again until early in 2018.

"I was surprised when we took it out of the shed again, it seemed smaller than I remember," said Knight.

Now Mrs. Knight's trusty old Brough is off to a new life. It's going for auction at Bonhams where, despite its current dilapidated state, it's expected to go for somewhere between $185,000 to $240,000. If you'd like to know more, or if you have $300K burning a hole in your pocket, check out the Bonhams listing here.