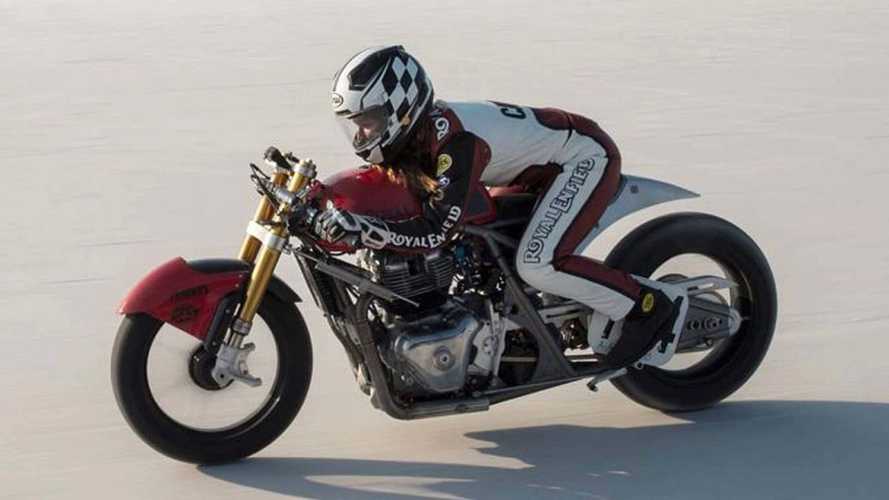 We’re all excited to see Royal Enfield's two new models hit the market. After some delays, the Interceptor 650 and Continental GT 650 have finally been announced for November. Just in case we weren’t impatient enough to see the twins finally join the lineup, Royal Enfield has given us yet another reason to look forward to the launch: the maker just registered a land speed record with the Continental GT during the Bonneville Speed Week.

Others we're excited about

In fact, the modified Continental GT 650 clocked in at 150 miles per hour, a record that has yet to be confirmed by the Fédération Internationale de Motocyclisme (FIM). The best part about this record? It was set by 18 year-old Cayla Rivas from Fresno, California. What does a kid knows about setting records, you probably wonder. Oh, I don’t know, a thing or twelve, probably: that’s the number of records she has under her belt. At 18. I’ll give you a minute to take that in.

The Continental used for the salt-flat run has been modified for the occasion by Harris Performance. The modifications that turned the cafe racer into a drag-ready beast gave results from day one, with the bike reaching its record-setting speed on the very first day of tryouts. Few details regarding the list of modifications have been shared, but details such as the tubular frame, shorter saddle, and Ohlins suspension stand out.

The all-new Royal Enfield Continental GT 650 and its twin, the Interceptor 650 are set to launch worldwide in November of this year. Already last month we got to have a look at a few page from the models’ leaked service manual that contains the full run down of specs.

I guess Royal Enfield wanted to give us a little teaser ahead of the official release. Granted, the model we’ll actually have access to won’t set land speed records at 47 hp, but it’s funny what a few tweaks will do.