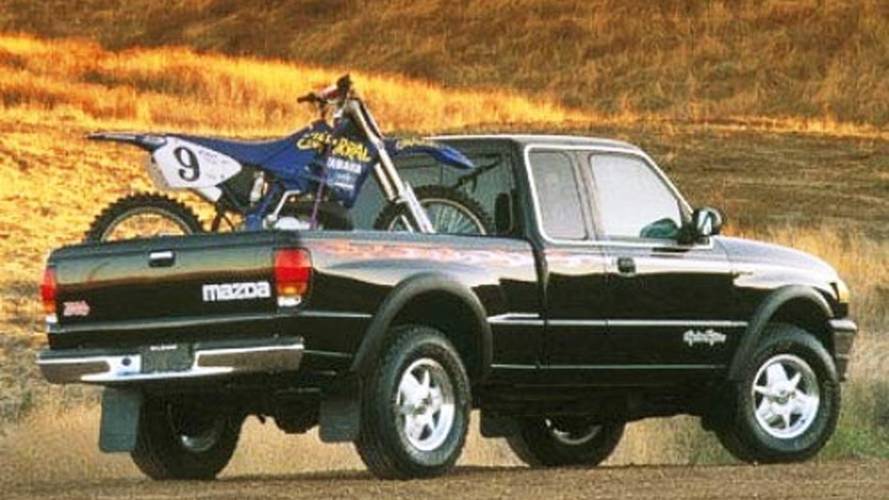 Top 15 Bike Haulers of the Past 20 YearsHow you haul your bike from place to place is like your taste in music: It evolves over the years, can all of...

1) Ride it everywhere. That’s what it's made for.

2) Trailer it. Why should I change my daily driver because I own a bike?

4) Pickup truck. Because the neighbors already look at me funny without a rape van.

This article can’t possibly help the iron butt, hardcore, ride everywhere tourers. But then, those folks seldom need to take a sport bike to a track day or a dirt bike to the land where the pavement ends. Others typically start off as category 2 by trailering their bike behind what they already own, and then buy a truck before saying to hell with what the neighbors think (and fuel economy) and getting a van. For the rest of you, here are my five suggestions for each category.

If you live out in the suburbs or a more rural area owning a trailer, finding a place to park it is not a big deal. If you live in the city you’ll be happy to know that U-Haul rents what they call a motorcycle trailer and you can tow it with almost any car. My suggestion is to find a daily driver you like that U-Haul says can tow their trailer. For trailer towing, I like less sporty cars that get decent mileage. That way you don’t forget you have a trailer in back and start attacking canyon roads on your way to the track. All of these put pickup trucks and vans to shame mileage wise.

1) Subaru Impreza Outback Sport. Really any Subaru is great if you're headed somewhere with a dirt bike, but the wagons are especially good for hauling all your gear to the track or riding area. Most are rated for 1,500lbs—more recent ones are rated higher and get better mileage. You could tow with an Impreza WRX, but the softer ride and more relaxed cruising of the non-turbo versions are better after a long day on a bike.

2) Pontiac Vibe/Toyota Matrix. Both of these are the same car, and they are pretty much just a Toyota Corolla hatch/wagon. The extra room in back is great for tools, leathers and camping gear, and it will tow the same as the other two listed above. These can even be fun to drive if you get a manual transmission, and the Pontiac also gets the official Pussy Cat Dolls seal of approval (make your own inappropriate joke in the comments section).

3) Jetta Wagon or Golf. Either of these can easily tow a bike and aren’t bad to drive on a daily commute. The TDI version gets amazing MPG, and still has plenty of power for most people. The Jetta Wagon is just a Golf with more room for junk in the trunk.

4) Volvo V50/C30.  Much like a Swedish version of the Golf/Jetta Wagon above, both of these cars are built on the same platform. It’s actually similar underneath to the Mazda3 and Ford Focus of the same era, but only Volvo trusts you with a trailer and 2,000lbs of cargo.

5) Jaguar X-type Wagon. I was going to put a Buick on the list because nothing is better for a relaxing freeway cruise home after a hard day, but then I remembered this oddball. In Europe, the X-type is rated to tow 2,000lbs and U-Haul says it’s okay by them. Under the skin, this is the same basic car as the European Ford Mondeo, which is similar to our Contour or Mercury Mystique.

Pretty much any truck can haul a bike around, so this comes down to five favorite pickups to daily drive. Many guys think a truck isn’t a real truck without 4-wheel drive, 33” Super Swampers, and a ride height that has Prius owners behind you staring at your TruckNutz. Good luck loading and unloading a bike in that. A small or midsized truck with a lower ride height is much easier to get bikes into. The old Volkswagen Rabbit truck was low enough that you often didn’t need a ramp, just a stout friend.

1) 2000-12 Toyota Tacoma S-Runner/X-Runner. Lowered from the factory, but still with enough payload capacity for most bike duties. With no Supra in the lineup, these are actually the sportiest things Toyota was selling at the time. All of them are extended cabs and all of them are manual transmission. Any Tacoma is good for bike hauling, but these are the most fun to drive when not full of motorcycle—you can even autocross or track day one.

2) 2004-2009 Chevy Colorado ZQ8. These are my personal favorite, I special ordered one in 2005 that I still drive: A factory lowered package, which was available over the years on all body styles and with all drivetrains. Later models were limited to extended and crew cabs. The last few years that these were made, they were limited to top of the line trucks, but that meant they came standard with a 5.3 liter V8 and 300hp! The Colorado/Canyon trucks feature one of the greatest bike hauling innovations ever: The ability to close the tailgate half way.

3) 1994-2003 Chevy S10 SS/Xtreme. Another factory lowered sport truck that kept most of the truck usable. These were basically handling packages on the 2WD trucks. SS trucks are rare, but Xtremes are easy to find and came in regular and extended cabs—and even with the base 4 cylinder motor. These trucks are very much trucks, and can feel agricultural compared to anything else from the 21st century, but they are cheap and built like trucks to take abuse.

4) 2009-12 Suzuki Equator. If you ride a Suzuki, this is the truck for you. Under the skin, it's the same as the Nissan Frontier, but sold through the Suzuki dealer network with a face-lifted bodywork. It's just as good at everything as the Nissan truck—and parts are readily available— but it will cause "WTF?" looks wherever you go.

5) 1997-2012 Ford Ranger/Mazda B-series. When the Ranger went out of production in 2012, it was a serious antique under the skin, but still a solid option for people looking for a small truck. The Mazda B-series was the same truck only with Mazda badges. If you can find the Troy Lee Designs Mazda special edition you will get extra bonus biker cred wherever you unload.

Vans are pure utility with lousy mileage and horrible driving dynamics. There is no two ways about it—when you see a man with a van and a motorcycle you know he is committed to track days, club racing, or off-roading. They are all pretty much awful, but some are less so than others.

1) 2001-2015 Freightliner/Dodge/Mercedes Sprinter. These are all the same vans and are available in a million different shapes, sizes, and weight ratings. All of them are also turbo diesel powered. If you can find a short wheelbase, low roof Sprinter for not a lot of money you have hit the jackpot for bike hauling, freeway cruising, and fuel economy. These can get 30 mpg easily, haul about four bikes and a ton of gear, and host a house party at the track.

2) 1995-2005 Chevy Astro/GMC Safari. These vans were produced for a long time, so there are a lot of them out there. The fuel economy isn’t all that much better than a full sized van, but have you tried to park a full sized van lately? These even came with an all-wheel drive system from the factory, which if you can find one, it will cost way less than a Sportsmobile 4x4 van.

3) 2003-2015 Ford Transit Connect. These vans, based on Ford Focus mechanicals, changed the whole market for commercial vans. Before you run out and buy one, take a tape measure to your bike and see if it will fit lengthwise. The 2nd generation comes in a long and short wheelbase model, but the earlier ones are all one length, which some find is not quite long enough.

4) 2013-2015 Nissan NV200/Chevy City Express. Same idea as the Ford Transit Connect only a little longer, and less expensive. These have only just become available so it may be hard to find one used, but they start at about $20,000 new. With a 2.0 liter 4 cylinder and CVT transmission, you're going to have to be patient, but you will be getting 26 mpg on the highway to the track. Both Nissan and Chevy sell the same exact van, with minor badging and option differences.

5) 1994-2003 Dodge Ram Van.  Way back in the dawn of modern motocross there was the Yamahauler. Dodge being as strapped for cash as they were even during the Daimler-Chrysler years, the van they were selling in 2003 was very similar to the one they sold in 1973. This is the modern van for all your 1970s vannin’ custom work, or your Japanese Dajiban modifications. Yamahauler decal packages are available on eBay, by the way.

So there you have one man’s options, I'm certain we will hear plenty more in the comments.