How Steering Stabilizers Work and Why You Need One 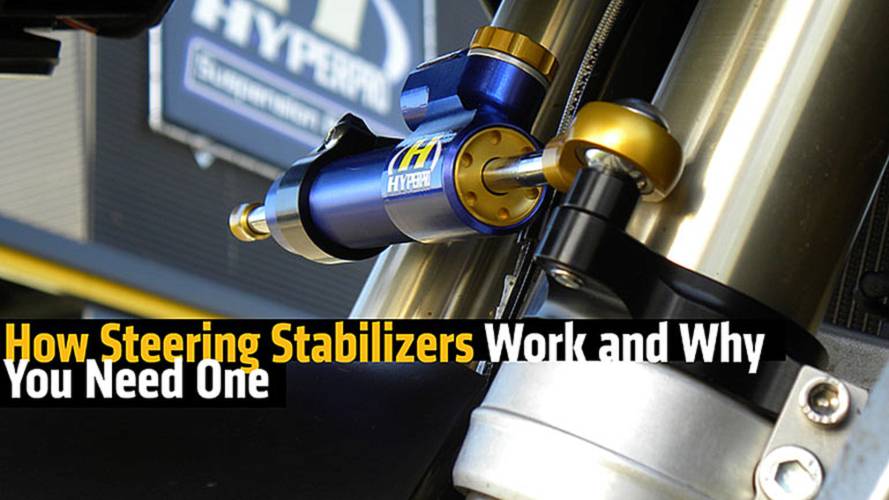 RideApart goes over how a steering stabilizer works and how it benefits you.

A steering stabilizer is a suspension system for the side-to-side motion of your front end. If you have ever watched racing you may have witnessed what a violent head shake can do. If not check out this video for a graphic illustration.

A steering stabilizer works in a way that's similar to your bike's front forks. Internal circuitry and hydraulic valving adjusts the amount of shock transferred through the bars to your arms. There is an attachment point to the frame and this sometimes violent motion is transferred to the frame, allowing you to maintain control of the motorcycle and even helping to reduce rider fatigue. So much like your front forks were designed to handle vertical impacts, a steering stabilizer is designed to reduce lateral movement. Hydraulic fluid passes between controlled chambers to dampen the forces of impact. Units are often called steering dampers as well as stabilizers.

READ MORE: How it Works The Basics of ECU Tuning

Why do I need it?

Not everyone needs a steering damper. There are many situations that can be improved by adding one to your motorcycle. Riding rough terrain, whether asphalt or off road, can be helped with a stabilizer. Allowing the damper device to absorb those constant bar movements reduces rider fatigue and increases safety. Long distance touring and riding with worn or knobby tires all add to rider fatigue. You are constantly making small corrections to the steering as you ride. Reducing the amount of input a rider uses can help make you safer and allow you to concentrate on traffic, and other road conditions.

READ MORE: How To: Suspension Setup

Where can I get one?

Almost every retailer carries a brand of steering stabilizer. The things you want to watch out for are cheap imitations and imports. Because you are attaching a device designed to restrict lateral movement of your steering, you don't want to have a part that isn't designed and built properly.  You want to look for a stabilizer that offers multiple circuits for controlling both low and high speed damping forces. With only a single damping control the device is either too hard to use at low speeds, to compensate for higher speeds, or conversely too soft at high speeds.

What do we recommend?

Ohlins makes many OEM units, supplies race teams all over the world and builds some of the most desirable suspension systems for motorcycles.

Scott's Performance Products also makes a world class damper. Having won the Baja 1000 17 times, they have a track record of performing at the very highest level.

Both of these manufacturers offer multiple control circuits to provide a wide range of adjustment.

Hyperpro is another company with a top shelf steering damper. They use what they bill as "Reactive Safety Control" effectively creating a progressive damping that is always unobtrusive at low speeds but effectively "dampens" the hard hits that you need it to.

Do you use a steering damper? Tell us about your experience in the comments below!