How It Works: The Basics of ECU Tuning 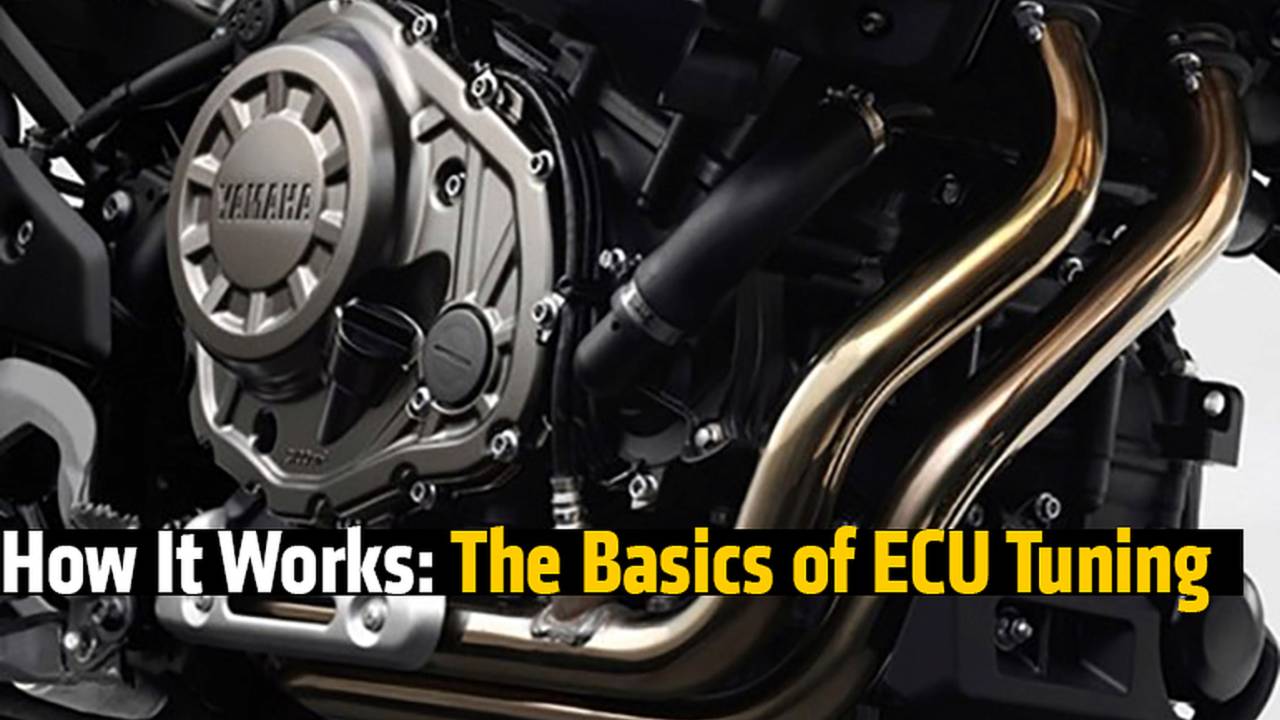 RideApart looks at ECU tuning: the how, the why, and the what it does.

Back in the grand old days of motorcycling engines had carburetors and only needed a kick-start to fire up. Repairs could be made with chewing gum foil and gum. You also needed to make these repairs, often--progress is generally a good thing. Today, we have ECU tuning.

There is something wonderful about turning a couple screws and getting a noticeable change in how your bike runs, altering the idle point, getting the fuel spot on and having a blast right after it's adjusted. It's a great part of the riding experience - until you need to adjust it again… and again… and again. One of the best parts of modern fuel injection is the "set it and forget it" stability and peace of mind it offers. That's not to say a carburetor couldn't be stable like that - they just weren't more often than they were.

So how do you get back some of the magical feeling of adjusting your motorcycle to make it run better than the factory settings? We explain the basics of ECU tuning.

ECU tuning is the art and science of cracking the code that the factory installs in your motorcycle's brain and giving it an upgrade. Tweaking your ECU means removing things like low RPM power restrictions, closed loop fuel maps, error codes when changing parts, and a slew of other options. It enables you to take a lackluster motorcycle with twitchy throttle control and turn it into that smooth powerful road monster you expected.

A typical reprogramming or "reflash" of your ECU can vary pretty wildly in price. In researching this for the 2014 Yamaha Ténéré project, we found that costs ranged from $200 to almost $500 for the work we wanted. We found out right away that the credentials of those who are offering to do ECU mods can swing wildly; there are people who purchased an ECU programmer and do this as a hobby. Be wary of these folks. In most cases, you'll have no warranty and done improperly this can really damage your motor.

We decided to use a trusted brand and company called ECUnleashed. They program everything from motorcycles to super cars and came highly recommend on the Super Ténéré forums.

There are a couple ways to have this service performed. You can take it to an authorized tuning center and they can do all the work, or you can take the ECU out and send it to ECUnleashed and have it programmed. If you have a tuning center close by this is quicker as they can get the map prebuilt and sent to them. At most, the work will take a couple of hours. Sending it in to ECUnleashed can take a week or more, depending on how far away from California you live.

The Ténéré is a really good motorcycle in factory form. We have discussed modifications and a general review here and here previously, but like everything here at RideApart, we wanted to make it even better.

The process is both simple and complex, as with all things computer-related. The ECU is removed from the motorcycle and connected to a programmer. Usually software is installed on a laptop but sometimes is a stand alone module or other system. The software allows access to the programming in the ECU and by changing parity bits and field options you can change how the ECU carries out its instructions. The hard part of this is figuring out what is in the ECU from the factory to know what to change.

How to Make Your Motorcycle's ECU Better

Here's what we did to our Ténéré's ECU to improve an already good motorcycle. Fuel and ignition maps were tweaked for smoother transitions and throttle response. Throttle restrictions were removed, this particularly improved the lower gears. Timing retard was removed making the engine rev faster and run harder. Programming also removed the factory fuel cut off. Yamaha uses this to help with emissions; in practical every day riding this makes the throttle response when going from full closed to open twitchy and unruly. The team at ECUnleashed also changed off throttle deceleration mapping. This reduces engine braking and making throttle transitions smoother.

The trick is to find the proper ignition timing and air/fuel ratio at every rpm. Some bikes are richer in certain areas, like sometimes in higher rpm areas because the engine runs cooler and safer, or lean in some rpms for emissions purposes.

If you notice that there is a theme here, it's because there is. Everything listed makes the throttle response smoother and adds some horsepower. The horsepower is the secondary benefit. Newer motorcycles make a ton of compromises to meet emissions and still produce useable power. Tuning your ECU can eliminate some if not all of these compromises and make any modifications you do more effective.

Manufacturers also make compromises for safer operation. Running leaner than factory can sometimes improve throttle and power, but too lean can fry an engine and burn a hole in a piston or two. This is why finding the right shop is so important and sloppy tuning can cost you big bucks.

Is ECU tuning right for you?

That is a tough question to answer. Much like the age old question of "Do I need a fuel tuner when changing a slip on?" there is no one-size-fits-all response. Your bench-racing buddy might tell you there's gobs of untaped performance in your bike, but that isn't always correct. But if your motorcycle has factory limitations built into it creating a riding experience that's less than perfect, ECU tuning is a very effective way to get the motorcycle you expected - or to boost your bike's performance levels if you're feeling like you've outgrown it. If you have performance upgrades, sometimes ECU tuning can make huge rideability and performance gains and sometimes become a necessity if you don't want your engine codes to go crazy.

If you are totally happy with your motorcycle and don't want to mess with any item and never change a part from stock, you might just want to let your ECU do its own thing. If it ain't broke, don't fix it.

Have you tinkered with your bike's ECU? Would you? Let us know in the Comments section!