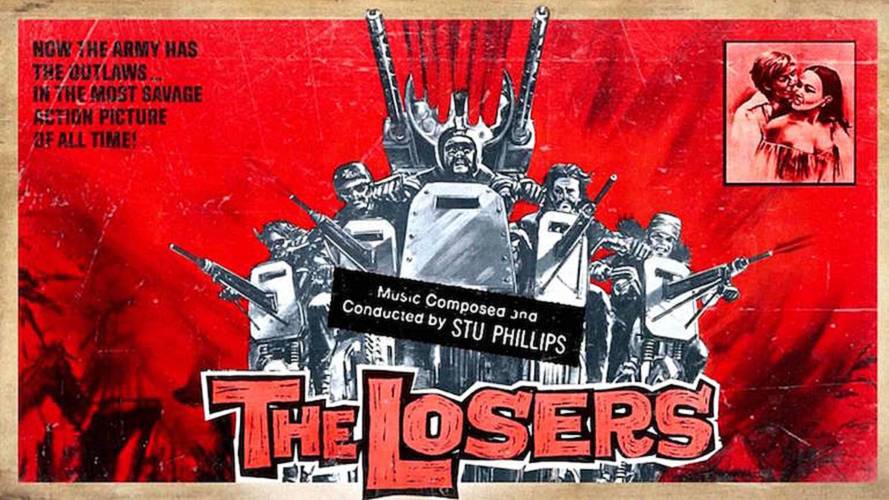 What better for Memorial Day than a bikers-at-war movie? Nam's Angels, also commonly known as The Losers, features a gang of outlaw bikers going to Viet Nam to pull off a rescue mission for the CIA in Cambodia. And don't bother asking why, because the script doesn't really seem to care. The meta answer to that question is that Sonny Barger, sent a telegram to president Johnson offering to go do some "Gorilla" (sic) fighting for the army to help the war effort. The mission involves rescuing a diplomat and CIA operative, who should not have been in Cambodia, and I think is based on Henry Kissinger.

A gang of five outlaw bikers from the "Devil's Advocates," most of them formerly deployed in Viet Nam, travel back because their particular set of skills are needed. The only real "why" the screenplay gives you is that the leader of the gang, Link (B-movie staple of more than 250 roles William Smith), is the brother of a U.S. Army major. Another of the gang, Duke (biker movie regular Adam Roarke), has a girlfriend he was forced to leave there who he plans to take back to America. The rest of the crew may just be there on a sex tourism vacation, or because they aren't allowed to mount machine guns to their bikes back home, it isn't clear.

First, before they can go on a rescue mission, they have to outfit the bikes with armor plates, and the aforementioned machine guns. Between the absurdity of the plot, the lack of explanation, and the bikes they build, the whole movie is very much like a 90-minute "A-Team" episode, only with more blood and nudity. As you can see in that first picture they start with stock Yamaha DT-1 enduro bikes, but they also add to the mix a VW-powered trike, with mudder tires, twin .50-caliber machine guns, and a rocket launcher from a Huey. The final product is very Mad Max and just one good sized bump away from the rider taking his own head off with an air-to-air missile.

It's hard to imagine what the point of the armor plate was, since it barely covers the rider, and the guns only fire straight ahead and at one elevation. No problem, the rider just has to pull a wheelie and aim with the front wheel.

Also, the armor and guns seem to vanish when need be, for jumps and such, and you can't blame the stunt riders for that. I can only imagine what jumping a bike with 100lbs on the front forks would be like.

This movie was filmed in the Philippines, using sets left over from other, better movies, and actual Filipino military. This, of course, was when the US was flooding that country with plenty of aid, and Ferdinand Marcos had yet to become the kind of  dictator Woody Allen made fun of in Bananas. Many, many cheap exploitation movie were filmed there at the time, even with a full blown war going on next door. The low budget folks loved it because everything was cheap, there were few safety requirements, and you could basically use real explosives in your stunts. The Filipino people, especially the kids, seemed to enjoy it, too.

The issue I had with understanding some of the movie is that the version on YouTube is dubbed over in Russian. You get the first few seconds of dialog, then someone translates it into Russian. You can watch the full English version on Amazon for free if you have a Prime membership.

I suspect the tag lines were created by picking words out of a hat.

Rotten Tomato Rating: None, but the audience score there is at 40%.

RideApart Worth Watching: Watch the beginning, then skip ahead till around the 1:00 mark for the actual motorcycle raid on the POW camp.

Redeeming Quality: The motorcycle stunts are actually really awesome, but other than that there isn't much. The stunts were pulled off by industry veterans Gary McLarty and Paul Nuckles, and almost every film they worked on is worth watching for that.

Worth Noting: In Pulp Fiction, when Butch (Bruce Willis) returns from the fight to find his girl watching TV, this is the biker movie she is watching. The biker gang has the same name as the gang in "Werewolves on Wheels", so if you want you can imagine that after this mission in Viet Nam the survivors returned to the US, and were cursed to become werewolves.

Also worth noting is that the asshole CIA operative/diplomat is played by the director himself, Jack Starrett, director of Run, Angel, Run!, Race with the Devil as well as dozens of other movies and TV episodes, plus he was Gabby Johnson in Blazing Saddles. Just look at his credits, acting and directing, and you have weeks worth of old movies to watch, many of them now on YouTube.

There is also another movie called Nam Angels made much later, which is more like Rambo II, on motorcycles, and I may review at some point in the future. Both that film, and this one can be watched in full on YouTube.