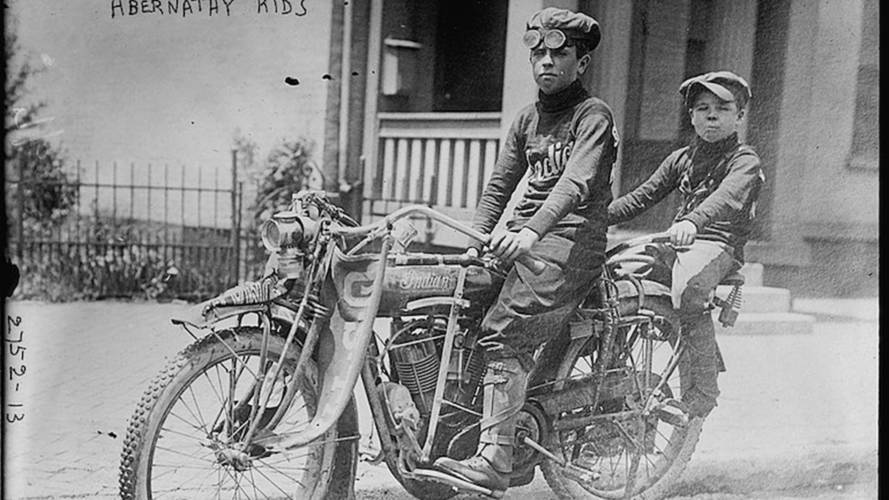 The Tale of Bud and Temple Abernathy: Two Boys, 10, 14, Who Rode an Indian Motorcycle From Oklahoma to New York

When my brother and I were kids we managed to stop fighting long enough to pool our money and buy a games console. That level of cooperation pales in comparison to the tale of Bud and Temple Abernathy, who, aged 14 and 10, put their money together and bought an Indian Motorcycle.The story of how they got the money is interesting in itself: the boys had earned it as a result of several cross-country horseback adventures.

The brothers’ first horseback ride was from Oklahoma to New Mexico aged 9 and 5. Their father, a US marshall, came up with the idea saying they needed to “toughen up.” This all happened shortly after the turn of the 20th century; the world was a different place back then. On July 10, 1909, (eight years after Indian Motorcycle was founded) Bud and Temple saddled up their horses, Geronimo and Sam, and set off for Roswell, New Mexico, alone. A year later, the Abernathy boys set out from Oklahoma again, this time headed for New York where they would end up meeting President Theodore Roosevelt.

This adventure drew huge media attention, with the country following the brothers' exploits via newspaper reports. When they arrived in New York City on June 11, 1910, they were greeted by a crowd of several thousand people, including their father, Jack Abernathy (Guess he took the train? –Ed).

For the return trip back home to Oklahoma, the boys bought a Brush Motor Car and drove home, once again on their own. A year afterward, in 1911, Bud and Temple accepted a challenge to ride horses from New York City to San Francisco in under 60 days. The rules stated they couldn’t sleep or eat indoors during the entire journey and a $10,000 prize was theirs if they succeeded.

Such a journey would be a trick even today, but at the time the state of transportation was very much stuck in the previous century. Three years after the boys' horseback attempt the U.S. Army would find it took a full 56 days to move a convoy of trucks from Washington, D.C., to San Francisco.

The boys ended up taking 62 days, narrowly missing out on the prize money but having picked up enough cash as a result of their fame that they were able to afford an Indian Motorcycle. The bike in the image accompanying this article appears to be a 1913 single-speed, 1000cc twin, which sold for $250 back in its day.

This was the first year for leaf spring rear suspension. (4-inches of travel, two in each direction). The engine was rated at seven horsepower, weight was right at 355 pounds and it rolled down the road with a top speed of 55 mph. The tandem seat with its own handlebar was a popular accessory, especially with the ladies. In 1913 – Bud, now 14 years old and Temple, just 10 – rode their new motorcycle from Oklahoma to New York. Their step-brother, Anton, went along with them, too.

It seems that afterward the boys decided they were too old for such excitement. Their ride to New York on the Indian was their last documented adventure. Bud (real name Louis) grew up to become a lawyer and practice in Wichita Falls, Texas. He died in 1979. Temple worked in the oil industry and passed away in 1986.