Adventure bikes are the SUVs of the motorcycle world. They present the promise that you can go anywhere, anytime. Got a wild hair up your butt and the Arctic Circle is the only cure? No problem. Is the equator calling? Hop on and ride.

In reality, the closest most SUVs get to off-roading is when they pull off onto the gravel shoulder to buy a velvet painting. Adventure bikes spend the vast majority of their time on hard pavement, too -- but they're more likely to get into some dirt than the average SUV.

The 2014 Yamaha Super Ténéré is good at all those things. It's not the best at any one -- but it's good at each one. And that is exactly what a dual sport adventure bike needs to be. 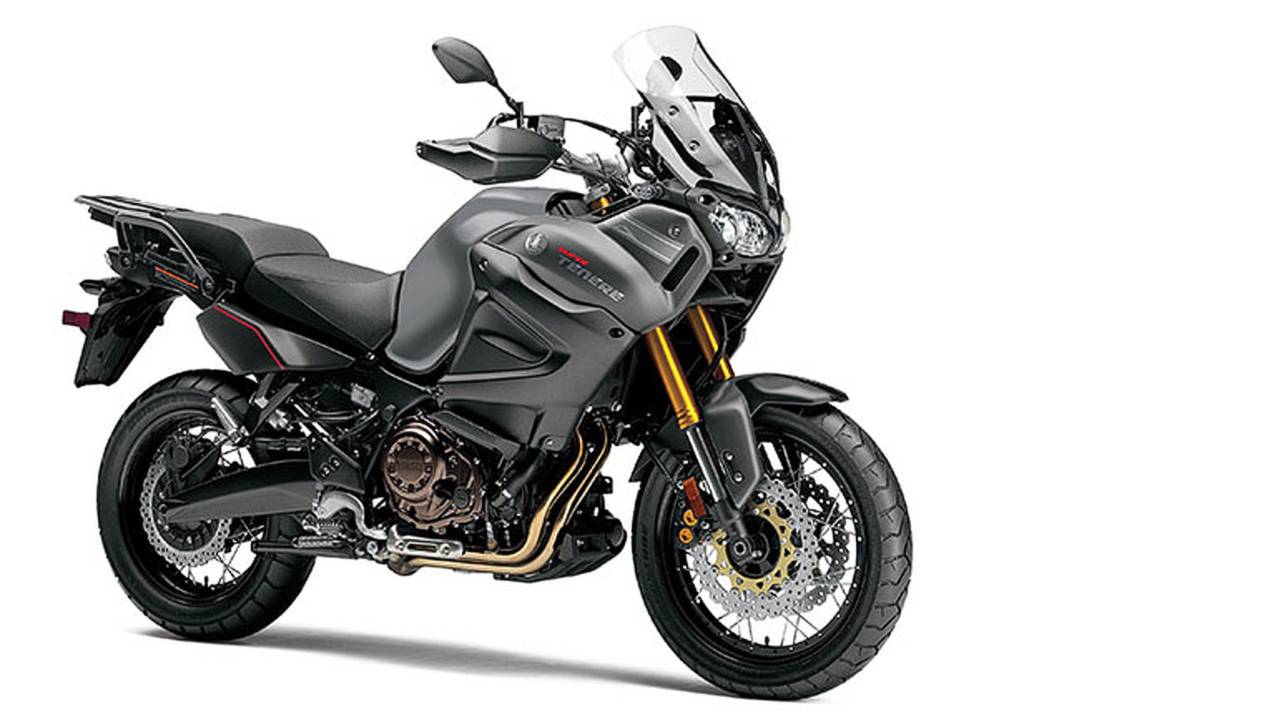 The Super Ténéré has undergone more of a massage than a full makeover for 2014, but the changes are significant and represent a suite of improvements over the outgoing model.

First of all, there are now two Super Ténéré variants: The Super Ténéré and the Super Ténéré ES. The "ES" stands for "Electronic Suspension," and besides standard heated grips, that's the difference between the variants. That, and $1,100.

The ST's (I'm tired of typing all of those accent marks, so it's the "ST" to me from now on) engine is the same liquid-cooled 1,199 cc parallel-twin four-stroke as before, but with a new head design, new pistons and new exhaust. Thanks to electronics, there are two selectable drive modes on the ST, "S" and "T" ("Sport" and "Touring"), changeable on the fly. This year, there's a bigger difference between the snappy throttle in "S" and the more relaxed response in "T." A new clutch damper has been added to the internal mechanism in order to smooth power delivery. 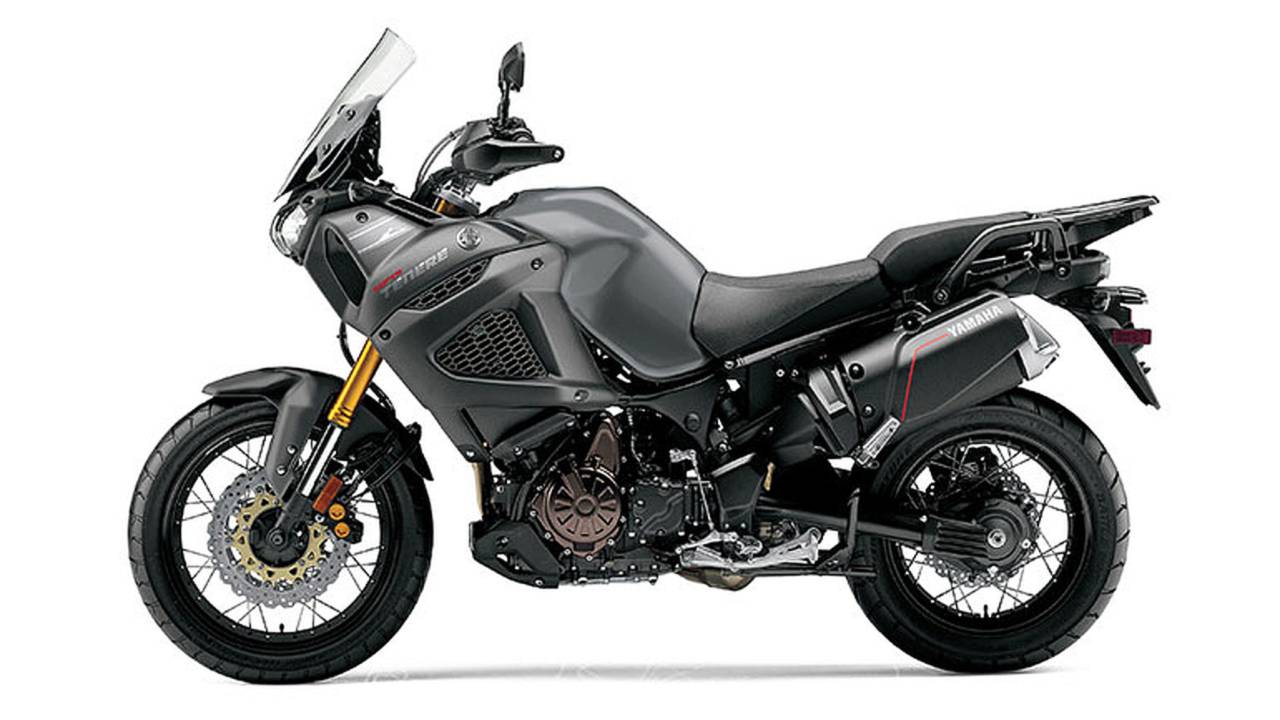 Yamaha spent some time considering airflow for the rider, and has come up with a few new solutions. The standard windscreen is now height-adjustable without tools, with a good range of adjustment. An additional lower mini-fairing has been added below the windscreen to direct flow and to reduce buffeting in the cockpit area. The handlebar clamp is now rubber-mounted to quell vibration, and the handlebars are closer to the rider for a more relaxed, slightly more upright riding position. Handguards are standard, and block the wind nicely.

A brand new dashboard graces the ST, along with a new switch on the left handlebar to help navigate the nested menu system on the dash. Once you get the hang of the operation, it's pretty simple and easy to use. I needed a couple of tutorials before the operation clicked in my brain, and then it became intuitive.

Fancy electronics deliver a sophisticated cruise control system. It's sophisticated, but still straightforward to use. Since it doesn't just keep the throttle in the same position, it reads the information from the YCC-T (Yamaha Chip Controlled Throttle, or throttle-by-wire) and maintains the set speed quite accurately, which is a great feature on long rides with changes in elevation.

Yamaha is rightfully proud of the ST's new aluminum side stand, which replaces the heavy steel one from previous models. It's long enough to keep the bike pretty close to vertical when parked. For total stability, there's a standard center stand -- though it takes a mighty yank to get the 575 lb (584 lb for ES) bike settled. I know that using a center stand is an art -- I'm just not a master of that art.

If you're looking for one of those rollicking adventure stories where the writer brags about conquering sand dunes and splashing through the swamps on a dual sport, I'm afraid I'm going to have to disappoint you. But I did get to ride the ST for two days in a wide variety of conditions, including several miles of gravel and dirt roads the San Bernardino Mountains east of Los Angeles. The ST performed as advertised -- it is very good in all conditions. A freeway blast or two showed that the tall, relatively narrow bike is comfortable, smooth and powerful. Lane sharing (legal in California, as you know) is achievable, thanks to nimble handling and predictable power delivery -- nothing worse than a surging throttle when you're threading through traffic at low speeds. ST's seat was all-day comfortable for me, and the riding position was just right. I could lift my weight off the seat with my legs, but I didn't feel bunched or cramped. 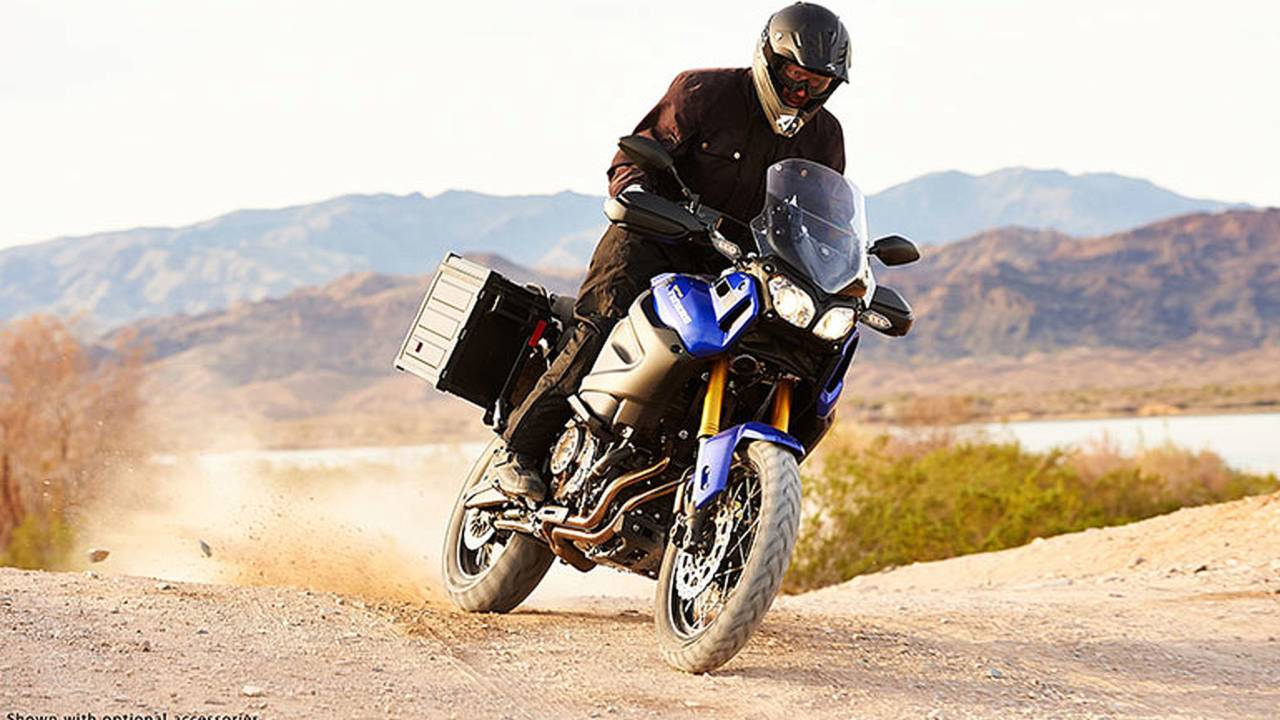 When the roads became more interesting and challenging, the ST responded beautifully. My test bike was equipped with Yamaha's accessory hard bags, which added a little width to the bike but didn't hamper handling at all.

The engine purrs along nicely, and the six-speed manual transmission snicks (as opposed to clunks) from gear to gear, and sixth gear is a slight overdrive, which works well on flat straightaways. Yamaha doesn't release horsepower and torque figures -- but I believe reports that I've read that the 1,199 cc parallel-twin puts out a little over 90 hp and around 75 lb-ft of torque, enough power to cover a quarter-mile in under 12 seconds in the right hands. Not to get too deeply into the engineering, but Yamaha has tuned the engine to deliver a unique character with a 270-degree crank pin off-set with uneven firing intervals. The resulting engine pulse almost feels and sounds like a big single, instead of a twin, and the power comes on smoothly, with a nice rise with revolutions -- not a kick in the pants, but smooth, linear power that makes the bike very predictable to operate.

The ST's engine sound and exhaust note didn't send shivers down my spine, but did give me confidence and comfort. Shaft drive is a logical choice for a bike that's going to spend at least part of its life in the dirt, and the ST's system is simple, elegant and, according to Yamaha, virtually maintenance free. That's nice. 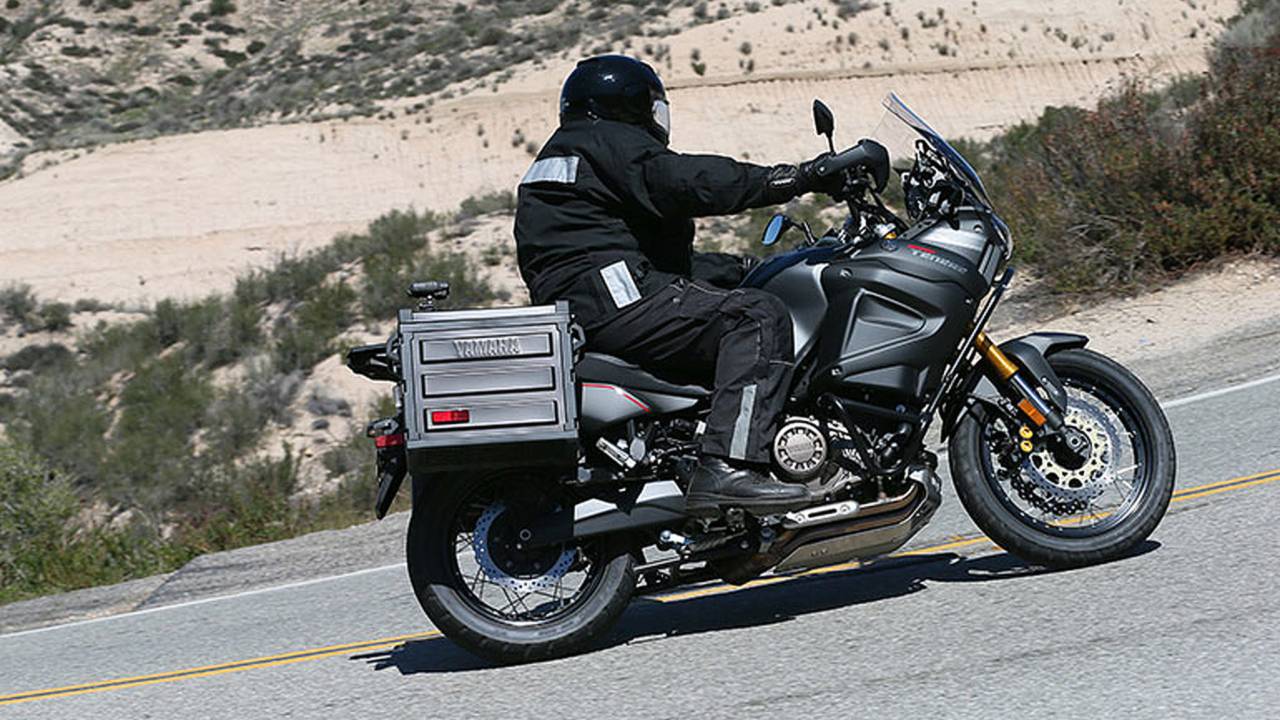 My brief ride off-road was fun, once I relaxed enough to enjoy it. I have very little experience riding in the dirt, much to my regret. I let Yamaha know that when they invited me to ride the ST, and they promised that I would not be overmatched by the conditions, and they were right. On hard packed dirt, I was comfortable riding the ST up to 35 or 40 mph, and on softer stuff and around curves, I kept a loose grip on the bars and let the sophisticated traction control do its thing.

I tried out both the standard ST and the ST ES. The standard ST gets a long-travel (7.5") single rear shock with genuine no-tool pre-load adjustment. You can actually see the adjuster knob, and reach it, even with the saddlebags on the bike. The front forks are 43 mm fully-adjustable KYB units with 7.5" of travel. The ES gets Electronic Suspension Control, with 84 levels of adjustment (4 levels of pre-load x 3 levels of damping x 7 levels of damping fine-tuning), all accessible through controls on the left handlebar and meters on the dash. Damping is adjustable on the fly, pre-load is adjustable when stopped.

ST comes with some cool spoke wheels (really the best choice for rugged riding) -- 19" in front, 17" in the rear. The spokes connect on the tire rim, not inside, so you can run tubeless radial tires and still get the spoke advantage off-road.

The stock Bridgestones that come with the bike are probably best suited for on-road riding -- if you're crossing the Andes, you may need to seek out more aggressive rubber. ABS brakes are standard, with two wave-type discs up front and one in the rear.

The brakes are linked front and rear when you use the front brake lever first; use the rear brake lever first, and the ABS is still in play but not linked. As long as you know that's what's going to happen, it's a good system. Rear brake application becomes more critical in aggressive off-roading (which I didn't do). There may be a super secret way to defeat the ABS, but it's not supported by Yamaha (hint - it may have to do with setting up the bike's electronics while it's on the center stand).

Wow, I can't believe that I got this far into my review without ever talking about the ST's looks. I think that's a good thing. I love the way the ST looks more after riding it than I did before my ride. It's really one of those bikes where form follows function, and everything on the bike makes sense once you've ridden it. Fit and finish are top notch. I really liked the Team Yamaha Blue paint scheme (standard ST only), but I loved the Matte Gray/Matte Black paint that's available on both models. This bike means business. 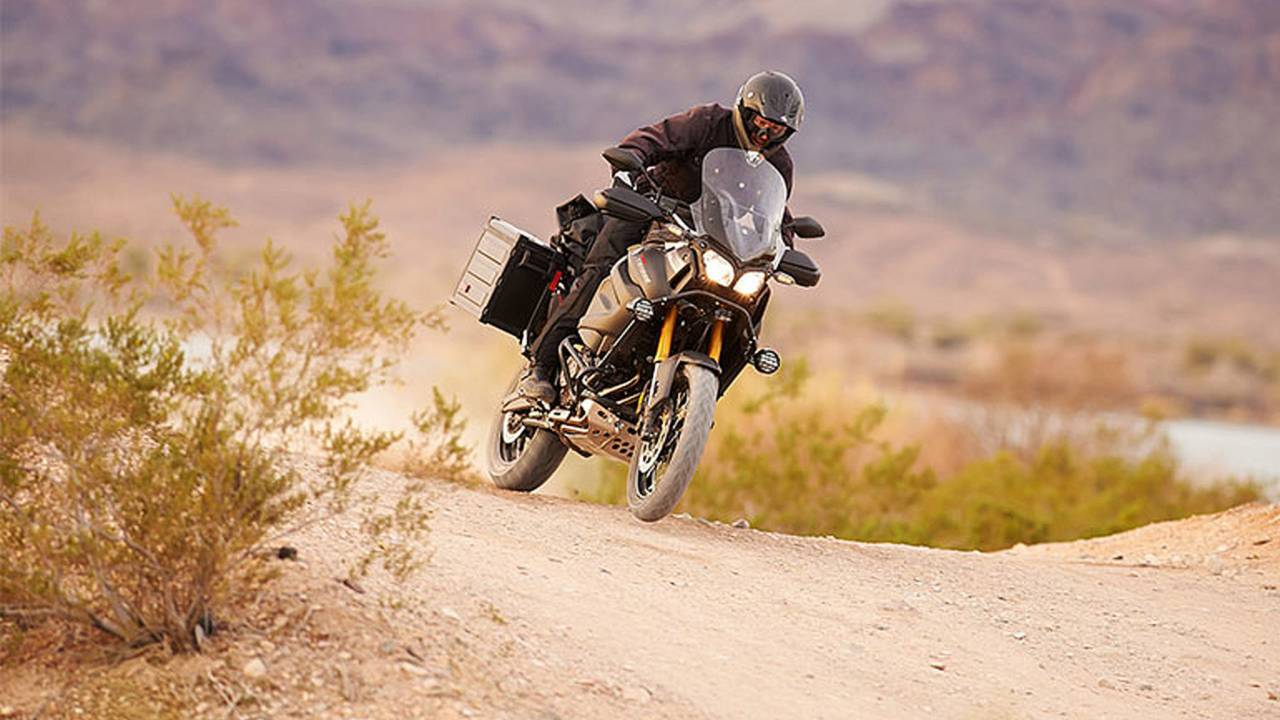 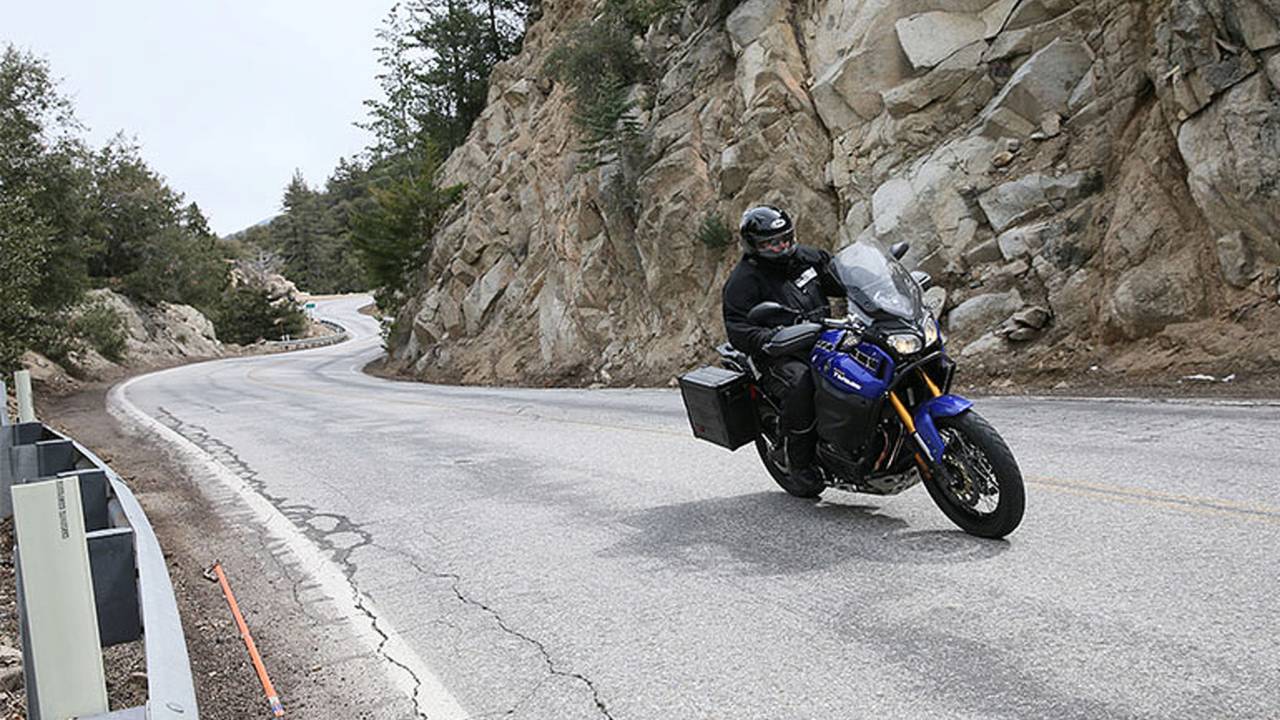 Yamaha has priced the ST pretty aggressively. The standard model starts at $15,090; and the ES model starts at $16,190. Yamaha makes with the accessories, too -- there's a full line of junk you can bolt on to your ST for your trip around the world (or across town). The aftermarket is in full swing supporting the ST, too, and there are a ton of options for everything from storage to lighting to crash protection to engine hop-up kits.

The Big Kahuna in adventure bikes is, of course, the BMW R 1200 GS, which recently got a makeover all its own. The GS and the ST start at similar price points, but Yamaha is proud to point out that when you add the electronically-controlled suspension, spoke wheels, electronic cruise control, heated grips and hand guards to the GS (all standard on the ST ES), the price differential grows to over $2,000.

There are several other bikes to consider in the adventure field. Triumph's Tiger Explorer XC, Suzuki's V-Strom 1000 and KTM's 1190 Adventure are all formidable competitors. It would be wise to consider some of the smaller displacement bikes, too, like the BMW F 800 GS, Triumph's Tiger 800 XC (a favorite of mine), and even the venerable Kawasaki KLR 650. 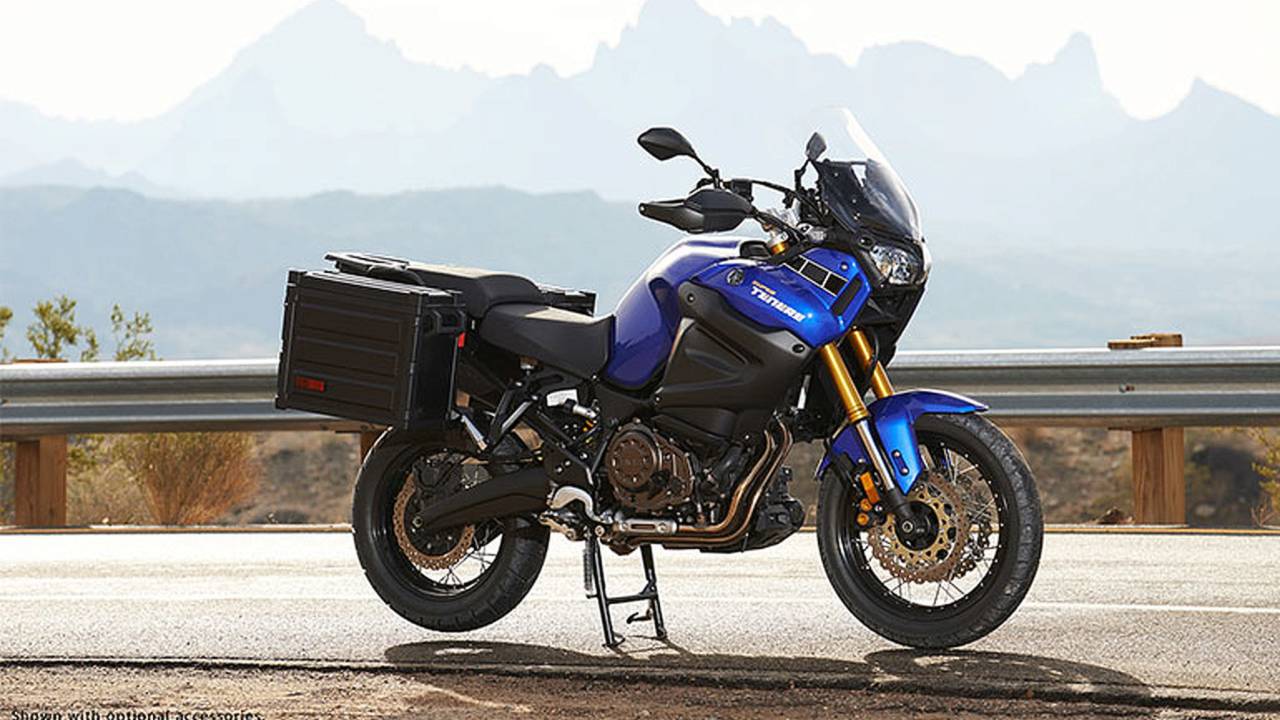 I seriously doubt that I'll ever be a dirt rider. It would have happened by now. But I still might buy an adventure bike, for the same reasons that I own an SUV. I like to have the capability for extreme conditions, even if I never experience them, especially when the everyday ownership experience is so good. An adventure bike is ready to go wherever you need it to, without fuss or compromise. Commuting, around town, weekend trips, a little bit of gravel -- the adventure bike swallows it all, and asks for more.

The Super Ténéré impressed me with its abilities in all conditions. I liked how it rode, how it looked and how it fit my riding style. This is a bike that could urge me to explore roads and places that I might avoid on another bike, and I like that. There might be better overall adventure bikes out there -- the BMW GS certainly takes things up a notch -- but they just make the Yamaha look like a good value, and a good point of entry for a rider who is looking for new roads and new challenges.