Is the Triumph Tiger 800 worth the hype?

Wes hasn’t been too impressed with either the quality or the intensity of Triumph’s hype campaign for the new Tiger 800. You know why they did it: the only sales that might be harmed by fueling anticipation of Triumph’s first ever genuinely dual purpose bike (Hinckley Triumph’s anyway) are those of the opposition. There’s nothing in the Brit bike manufacturer’s range that should suffer for knowing a middleweight adventurer is on the way, but potential customers might be persuaded to put off a purchase of a BMW F800GS. Well I've just ridden the new Tiger, was Wes wrong to criticize its marketing? 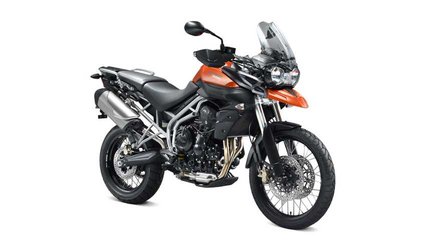 Triumph in the USA has unduly been upset by what is merely cynicism at their own cynical marketing, but Wes also has some surprising supporters... What we coyly call insiders at Triumph UK have been quietly agreeing, and thinking they were a bit too intense with this, worrying that it leaves wide open the possibility that even a good bike might not live up to the expectations this kind of thing can generate. Then it’ll look like a bad bike, and all the engineers’ work will be undone — a phone call to Honda would confirm that.

When the hype’s gone and forgotten the bike will still be here, so are its standalone merits up to being stood on, alone? On the whole, yes, though ironically our own expectations as observers, customers and bike riders generally might cloud the conclusion. The engine after all is a glorious 675 triple with more cubes and more torque, so it must, surely, be more fun? Except it isn’t: another 44lb weight, 20 per cent taller gearing and as one engineer pointed out on the Spanish press launch, significantly heavier wheels which offer more resistance to being accelerated and braked, all add up to a dulling of the Street Triple’s famous sparkle and zest.

Expect a punchy supermoto then and you might well be disappointed, but as a credible and capable middleweight adventure tourer, the Tiger 800 fares much better. It could do with more thrust at low revs, otherwise it’s economical, smooth and makes all the right Triumph triple noises – whistles, growls and snarls, while the suspension is best in class, just like that. The Triumph Tiger 800 XC is more dirt-biased with its 21-inch wheel and longer, softer suspension, and it does find grip in the loose stuff with the optional Metzeler Karoos remarkably well.

But for the distance riding most will want, the stock 800 is a better bet with its lower seat and more natural handling. It’s pretty agile and outstandingly stable, while the screen is neither too noisy nor turbulent and the bike should see you to 200 miles and more before the tank dries up. The seat is flat and firm but good for two hours before intruding even when brand new, and not dauntingly far from the ground either, while passenger facilities are spacious and well thought through.

It won’t kill GS sales dead of course, but it should make a noticeable dent in them, and it deserves too. More fun would be good but long term ownership satisfaction will be high.

Maybe not worth the hype but definitely worth buying.

You can read Kev's full review at Ash On Bikes.