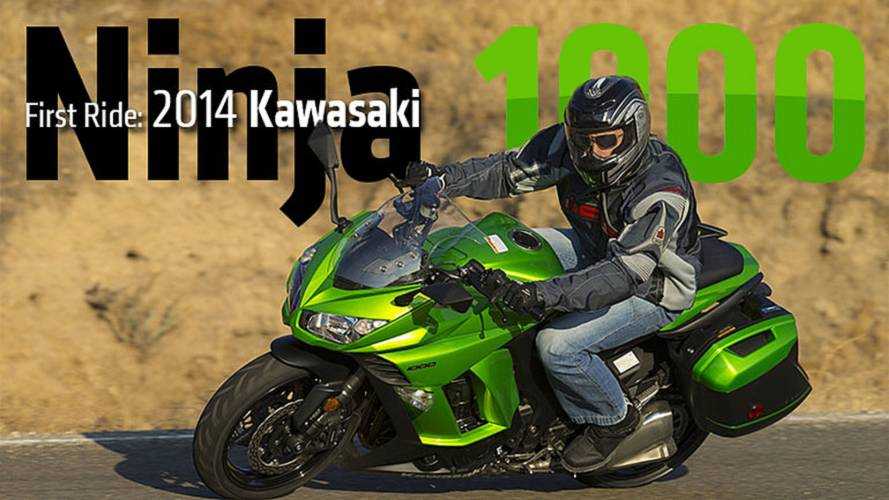 The new Ninja 1000 is up on power, torque, features, and down on price. We are proud to present RideApart’s review of the new 2014 Kawasaki Ninja 1000 ABS.

The newest generation of the Ninja 1000 is up on power, up on torque, up on features, and down on price. We’ve spent a few days with one and are proud to present RideApart’s review of the new 2014 Kawasaki Ninja 1000 ABS.

IT'S EASY BEING GREEN

The 2014 Kawasaki Ninja 1000 has received a huge makeover, both inside and out. The styling is still very “Ninja,” while also looking slightly more subdued as it seems Kawasaki has reserved its crop of even more radical looks for the 2014 Kawasaki Z1000.

Power is up on the new Ninja. Horsepower increases from 136 to 140 bhp, and torque jumped from 76 ft.-lbs. to 82. Kawasaki has added traction control and made ABS standard, to help control a bike that’s become pretty impressive on the performance spectrum. There are also two fuel maps: full power and 70 percent, to help further customize your ride based on the conditions. Gearing has been reworked as well, especially 6th gear, which is longer, making highway cruising a far more relaxed affair.

One of the biggest additions is the (optional) inclusion of two, 29-liter hard panniers. They’ve also fitted a knob at the rear to make preload adjustments possible on the fly, and have modified the grab handles to make them easier for your passenger to grip.

We’ve spent the week enjoying the last of the warm days here in sunny Southern California, where a roadster like the Ninja is at home. It’s immediately obvious why so many people choose the Ninja for is blend of sport and touring capabilities.

On the freeway, the Ninja is about as good as it gets. Sitting in 6th, the inline-four hums along quietly while still offering plenty of oomph to get up and go should you need to pass someone. Having recently come off much smaller bikes, I found myself cruising in 4th often, reveling in the whine of the engine and enjoying the additional torque provided by riding a little higher in the rev range.

Around town, you definitely feel the 509 lbs claimed curb weight more, though it isn’t unmanageable. Kawasaki warned us that the new Ninja 1000 was exceptionally sensitive to tire pressure and I found the handling a bit awkward until I checked and found my Ninja was about 5 psi short of recommended. With that fixed, slow speed handling was greatly improved though it never really let’s you forget you’re riding a fairly heavy, fairly powerful bike that mostly wants to go fast and in a fairly straight line.

The panniers are easy to operate and are actually unobtrusive. Due to some slimming of the sub-frame, Kawasaki has been able to pare them down a little, which makes a big difference, especially when lane-splitting around Los Angeles.

Taking a beloved bike and increasing the power, adding features, and reducing price is a well-proven formula for success and it’s hard to find much negative to say about the 2014 Kawasaki Ninja 1000 ABS. The engine is incredibly smooth and the power is abundant, regardless of RPM. The brakes work great, the bike is comfortable (though it would be more so with a better seat) and, assuming you’re into Kawasaki’s aesthetics, the bike is beautiful.

Wind coming over the half fairing doesn’t buffet your helmet, but does allow a fair amount of air to hit your chest. You may want a taller screen if you plan a ton of highway miles.

Kawasaki has created a package that is worth far more than its price tag and it’s no wonder the Ninja has become so popular. As a result, this new 2014 model can only enhance its legacy.

The problems we had with the Ninja were minor. The seat could be a little less sporty and a little more relaxed, as the current one tends to seat you directly where a pair of bicycle shorts would provide alleviation, instead of on the meat of your backside.

We were very happy when our steering issues seemed to correct themselves with the appropriate tire pressure, but it’s a bit unsettling to know that such a small amount of pressure difference could provide such drastic results. This is a major reason we always recommend carrying a nice air pressure gauge and checking your pressure often.

The 2014 Kawasaki Ninja 1000 ABS has a suggested price of $11,999, that’s $100 less than the previous model. May not sound like much, but this is an incredible deal considering you get multiple riding modes, multiple levels of traction control, and ABS all included stock. In comparison, the Honda CB1000R is $11,760 but only makes 125 hp and 73 lb.-ft. of torque and doesn’t come with many of the rider aids of the Kawasaki. The Yamaha FZ-1 is the other main competitor, which is nicely priced at $10,790, but isn’t nearly as good to ride.

We were very impressed with Kawasaki’s new Ninja 1000 ABS. We wish we had more time to take it on a proper tour, and we’re hoping Kawasaki can part with it a little longer to afford us time to do so. It’s a great all-rounder that will take you on any journey you can dream up and still keep you entertained in the canyons on a nice Sunday afternoon. For the price, it’s going to be really tough to beat.