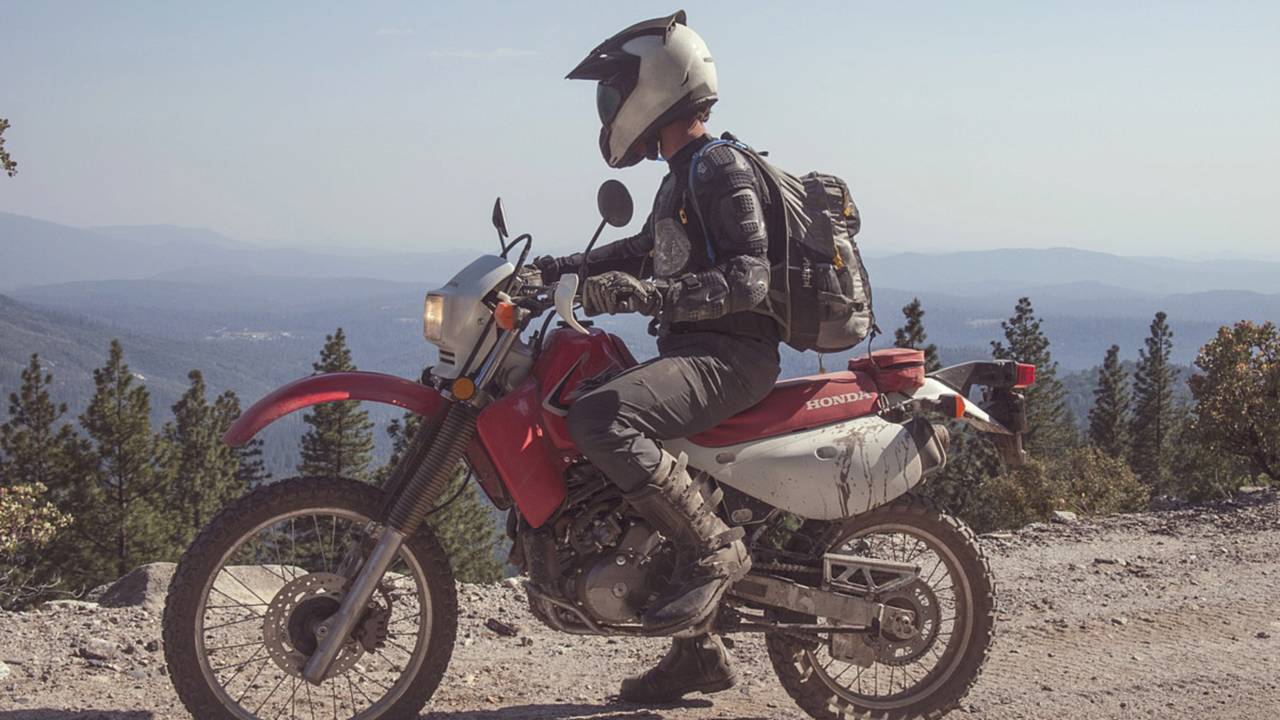 Affordable, proven and capable, the 2013 Honda XR650L dual-sport has been in production, unaltered, for two decades. Can it still get dirty in 2013? Yes.

Affordable, proven and capable, the 2013 Honda XR650L dual-sport has been in production, unaltered, for two decades. Can it still get dirty in 2013?

There is one update for the 2013 model year — a different color sticker on the gas tank. Other than that, the XR650L remains as it was when it first entered production in the early 1990s.

A steel tube frame which contains the oil cradles a 644cc, single-cylinder, dry-sump, air-cooled motor. A low compression ratio of 8.3:1 means it’s unstressed, but that and its age don’t mean it’s a total dinosaur; there’s four-valve head run by a single overhead camshaft.

The XR is also equipped with an electric starter and, surprisingly, no kick start.

At the rear of that frame is a square-section aluminum swingarm connected to a Pro-Link Showa shock with a very serious 11 inches of travel and 20 adjustment positions for both rebound and compression damping. Fork travel is even greater at 11.6 inches. Those 43mm Showa cartridge units are adjustable in 16 positions for compression damping. That’s actually a really nice suspension setup for a basic dual sport, giving the XR nearly as much suspension travel as a dedicated dirt bike.

The XR uses a five-speed gearbox with a very, very short 1st gear, then wider ratios following that.

50-state legal, the Honda even comes equipped with passenger pegs and enough room on the back for a pillion. But, it keeps true dirt-size 21 (front) and 18-inch (rear) wheels, making tire-choice easy.

I rode the XR650L for three days straight through the eastern Sierras on the Wilderness Collective trip. Honda supplied the bike, so it was a brand new 2013 model with break in miles on it only and in completely stock trim, down to the Bridgestone Trailwing tires.

Most of the riding was on dry, firm fire roads. Some sections were very rough, covered in deep ruts and pot holes, there were several rocky water crossings and one miles-long stretch was over sharp, protruding rocks. The last day saw us do about 45 miles on winding, paved roads.

All of that’s a lot less than the XR is capable of handling, so the biggest limiting factor came from the truly awful tires and some bad decisions in the ergonomics department. Sadly, that means that I could neither stand on the bike, nor find much traction.

Given those constraints, the Honda actually proved a fairly willing companion, so long as I dialed back the speed a bit. The motor’s low down torque mind climbs a cinch, even at fairly low speeds and in the higher gears. There were times where I was convinced it was going to stall, but instead, it just willingly chugged its way up any hill I asked it to.

Putting in over 100 miles off-road each day, it was also remarkable how comfortable and easy the XR remained, even when hot and tired. And remember, I was definitely sitting down the entire time.

Easy to ride and capable, the XR does real dirt bike stuff thanks to that long-travel suspension and torquey motor.

And, as you’d expect, that suspension just totally eats bumps, jumps and landings.

The utter lack of traction at least made slides easy. Something the XR’s intuitive feedback and smooth, easy torque made very accessible.

With mostly novice riders along on the trip, crashes were many. At no point did any of the XR’s sustain more damage than a bent lever.

Returning 52mpg, the XR’s motor is efficient in addition to being simple and indestructible. Vibes aren’t even that bad. This would be a great platform on which to find yourself a long way from the nearest mechanic.

What it looks like when I try to stand up on the XR.

Despite their knobs, Bridgestone Trailwings are some of the worst off-road tires on sale today. I experimented with pressures as low as 7psi and never once felt I wouldn’t have been equally well-served by a slick tire. Why, oh why does Honda spec such garbage, utterly removing any true dirt capability from a dirt bike?

The 37-inch seat is a stretch even for my 6’2” frame and 34-inch inseam. But, the pegs are so high that my knees are above the gas tank when I stand. And the bars are so low that I had to bend 90 degrees at the waist to reach them while trying to stand. To actually be able to ride the XR off-road, you need to have at least a 32-inch inseam, but be under 5’10”. I’m going to hazard a guess that excludes most of the population. Again, why would Honda spec such silly ergonomics, again destroying the motorcycle’s capability?

That very low 1st gear would be great for climbs and obstacles, if the tires could supply some traction to counteract its torque. In stock form the XR’s back wheel spins instead of hooking up throughout 1st gear, rendering it pointless. Then, 2nd is too tall to work at low speeds, so you’re just sorta screwed.

The 2.8-gallon tank is only good for around 100 miles of reasonable off-road riding. You’ll want a larger, aftermarket item if you realy head out into the boonies.

Owners report problems with subframes cracking when the XR’s seat is loaded down with gear or a passenger and then subjected to big impacts or landings. Still, welded gussets or bracing should set you back less than $100.

The headlight is just sorta there to satisfy legal requirements. You’ll need something much more powerful if you plan to ride at night.

The stock suspension is plush, if soft. Fitted with more appropriate rubber, you’d quickly overtax it while riding…enthusiastically.

There’s two main competitors for the $6,690 XR650. The $6,499 Kawasaki KLR650, which is much heavier and very street-oriented and the $6,399 Suzuki DR650, which is an even older design that’s less dirt-capable. The smaller, $6,690 Yamaha WR250R is actually almost as fast and doesn’t have such compromised ergonomics in stock form.

As a simple, proven dual-sport, the Honda XR650L would excel in stock form if not for some unfortunate specification choices. Spend a couple hundred bucks on real tires and about the same on lower pegs and higher bars and you’d suddenly find yourself with a bike as capable of carrying you around the world as it is playing on local trails or commuting through rush hour traffic. Still a great bike in 2013, if you’re prepared to make it one.