This new Honda Pioneer 700-4 Side-by-Side isn’t just a utility vehicle and isn’t just a sports model. Instead, it aims to combine work with play in a package that instantly transforms from a two-passenger with bed to a true four-passenger vehicle.

The Pioneer replaces the Big Red in Honda’s line up, bringing more capability to a lower price point.

The Big Red to Pioneer 700-4 story is about much more than just some extra seats though. With it, Honda wanted to create a SxS that could handle both work and play. The bed, which can raise at the front to dump its load out the rear can carry the same 1,000lbs payload as Big Red and both vehicles use the same 675cc, liquid-cooled, four-valve, single-cylinder motor and three-speed, torque-converter, automatic transmission. But, the similarities end there.

The Pioneer is equipped with independent suspension front and rear with 7.9 inches of travel at the front and 9.1 at the rear. In an effort to keep the price down, no power steering is fitted, with Honda saying that the combination of front suspension geometry with a new, 8-inch front tire should keep steering light.

The mid-mounted engine drives the rear wheels through a non-differential rear end in default, Two-Wheel Drive mode, directing power to the front in 4WD or locking the front differential when “4WD Diff Lock” is selected. There’s no low-range transfer case or hill descent control, but the low gearing and sensitive brakes are able to walk you down steep hills in complete confidence.

The automatic transmission is equipped with three forward speeds and a reverse, as well as programming that allows it to detect rider input and adjust itself automatically between “sport” and “cruise” modes, with the former kicking down noticeably sooner and holding onto gears longer and the latter delivering a much more relaxed ride.

The Pioneer is also equipped with a car-style parking brake that makes deactivating it while parked on a hill simple and easy. Some other Side-by-Sides require rocking the vehicle to remove pressure from the mechanism before it will release. Honda is targeting user friendliness in nearly every aspect of this vehicle.

The company is also serious about safety. Unclip the standard safety net, reach inside to unlatch the standard door, climb through the heavy-duty roll cage and clip yourself into the three-point safety belt and you’ll find the Pioneer’s cabin spacious and comfortable, if extremely utilitarian. The only potential problem with ergonomics comes from the unadjustable steering wheel, which may get in the way of very large riders’ beer bellies.

Believe it or not, but the rear seats are even more comfy. Fold the backrest up and the cushion down — which takes about 15 seconds — and the tilt bed locks in place. Rear seat passengers also get doors, safety nets and three-point belts, but also more leg room than is available in the front seat. Even at 6’ 2” tall, with a 34-inch inseam, I was able to ride back there in complete comfort, with inches between my knee and the front seats. Rear seat passengers are also treated to a plusher ride thanks to the rear suspension’s longer travel. 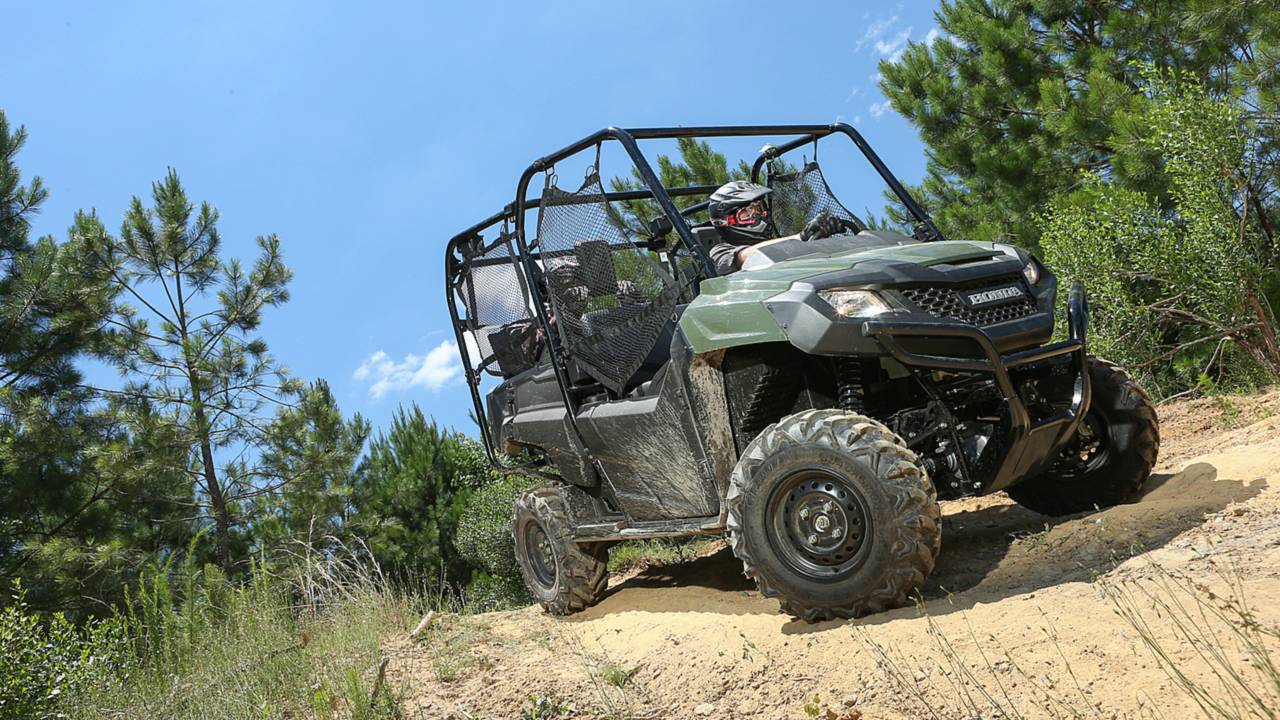 We flew out to South Carolina to visit Honda’s Timmonsville production facility for the Pioneer’s line-off ceremony, then spent the afternoon hooning the Pioneer around Honda’s own test trails.

The Pioneer is assembled at that plant, with the only major part coming from Japan being the 675cc motor. The new production line for this model represents an additional $27 million investment and 65 new jobs at the 535,000 square foot facility which already employs 650 people. The plant produces up to 100,000 ATVs and Side-by-Sides annually, for both domestic consumption and export. 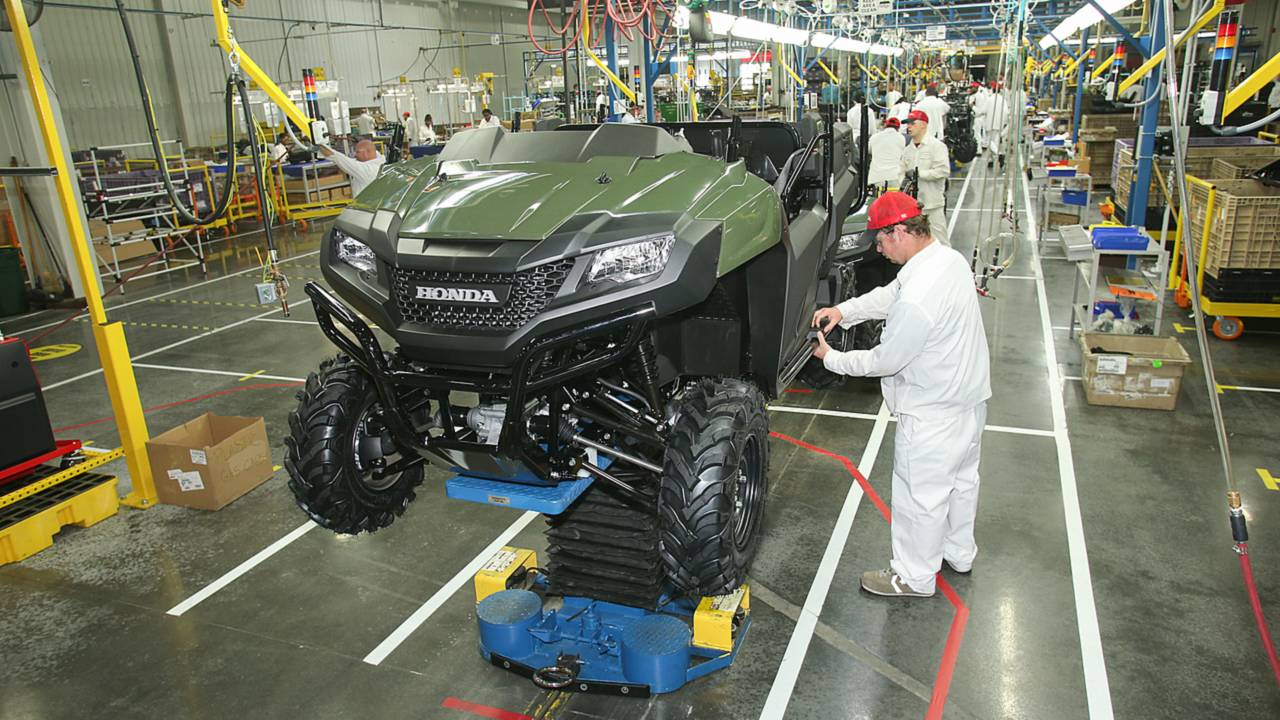 The Pioneer and other models are designed and developed in America with validation testing taking place in the swampy woods behind the factory. There, trails snake tightly between trees, through mud and water, over rocks and downed trees and up and down steep hills.

I don’t have a ton of experience piloting these types of vehicles, but the Honda provided an easy learning curve, delivering power slides and jumps after just a few minutes inside that black-plastic cockpit. 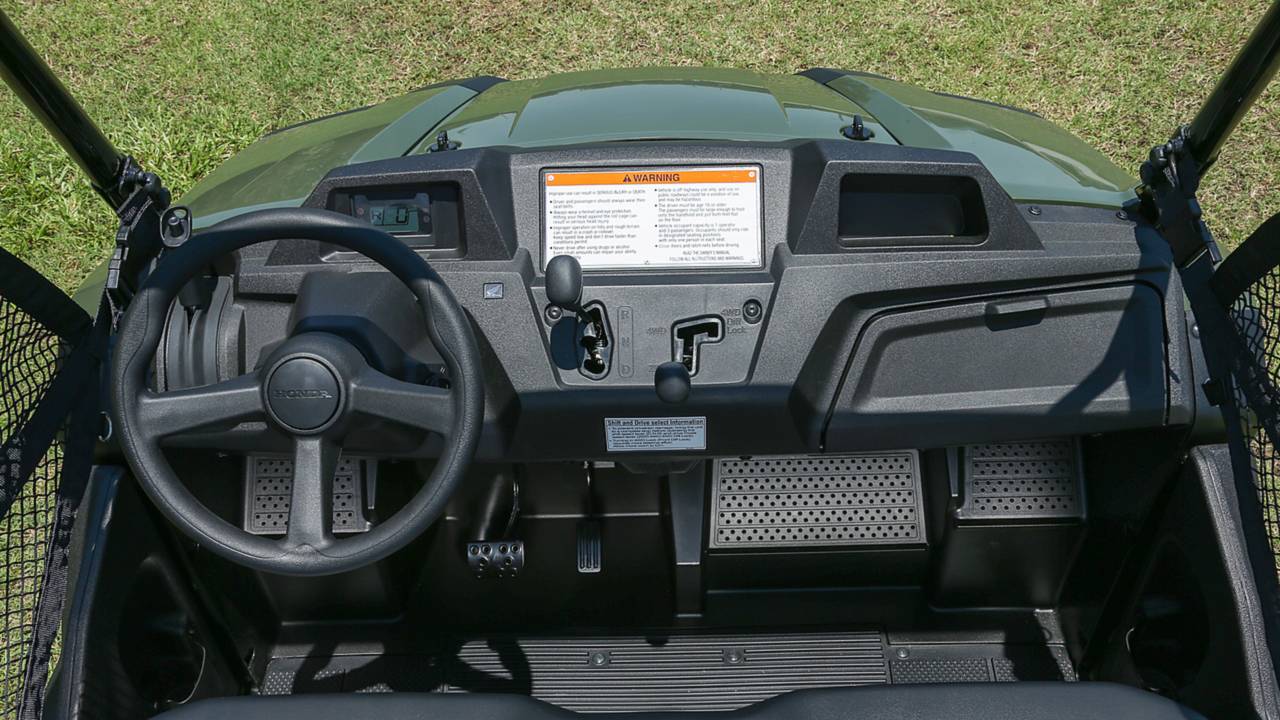 The least experienced journalist there, I also put the Honda through tougher tests, discovering obstacles that challenged the Pioneer’s full ability to deal with idiot operators. Because of that lack of experience, I didn’t know when simply pointing the vehicle at an obstacle and flooring the throttle would be a bad idea, so made that my default approach. Everything I could throw at the Pioneer — from hitting logs at 25mph, to dragging the frame over berms, to clipping a tree at speed with the front wheel, to achieving full suspension articulation through an obstacle course to landing a jump on the front nerf bar — was handled by the Pioneer with total assurance. At no point did it ever feel as if it was about to tip or roll and at no point did it experience any lasting effects from the abuse, at least none that couldn’t be resolved with a pressure washer.

That included tackling a swampy water crossing of unknown depth. Turned out it was deep enough to flood the front floorboards with an inch or so of water, but with that front differential locked, it just crawled through the sticky mud and deep water and out the other side. The Pioneers airbox is located in the cabin, to the rear of the mid-mounted engine, meaning you’d have to really sink this thing to flood the engine. Another clever trick when getting muddy comes from the rear seats which, when closed, seal out mud and water to keep themselves clean.

On a straight stretch of gravel road, I reached the Pioneer’s indicated top speed of 43mph and, once the transmission detected that I’d backed off the throttle, was able to cruise comfortably at 40mph, with the suspension just soaking up any bumps and the vehicle tracking true with good straight line stability.

Hooning the Pioneer actually turned out to be much more fun that I’d expected, this is an extremely capable, fun vehicle. 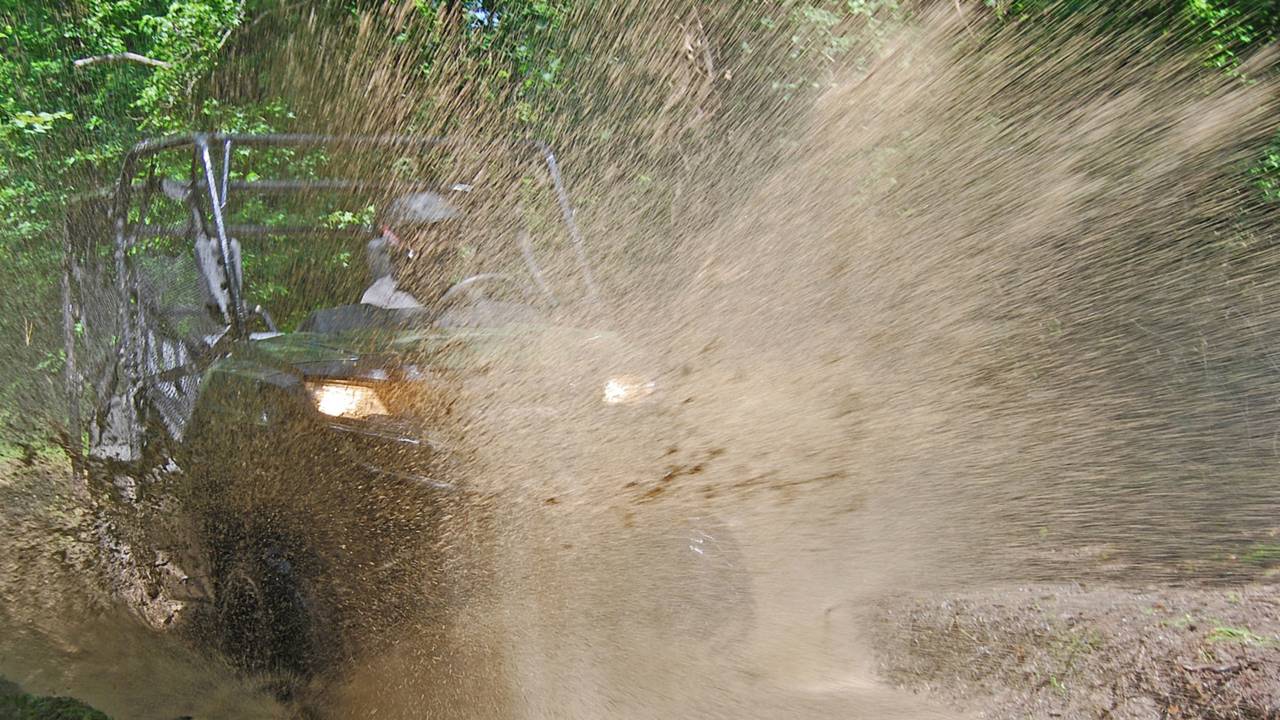 Even loaded down with three big dudes and the fourth seat full of camera gear, performance and handling remained unaffected.

The transmission delivers aggressive downshifts and holds upshifts to the rev limiter while hustling the Pioneer, but quickly and seamlessly transitions to relaxed, easy-going cruise mode once you back off.

Stability both in a straight line and while tackling significant obstacles is impressively secure.

Handling is light and fun; the Pioneer is an easy vehicle to throw around tight trails, belying its four-passenger capability.

The convertible seats delivery impressive versatility. In two passenger configuration, you can haul 1,000lbs of dirt like a dump truck; with three passengers aboard there’s still room for a full-size cooler in the bed, next to the rear seat; with four passengers aboard everyone is seated in spacious comfort without impacting performance or handling.

Those seats couldn’t be quicker or simpler to put up or down either and lock out dirt and water when closed.

A mechanical lock prevents bed tipping when the rear seats are raised.

Safety is high thanks to that beefy roll cage, three-point belts and the standard safety nets.

The Pioneer is capable of tackling anything even an idiot operator can throw at it while remaining easy to use and fun.

Despite the two extra seats, the Pioneer weighs 37lbs less than Big Red. 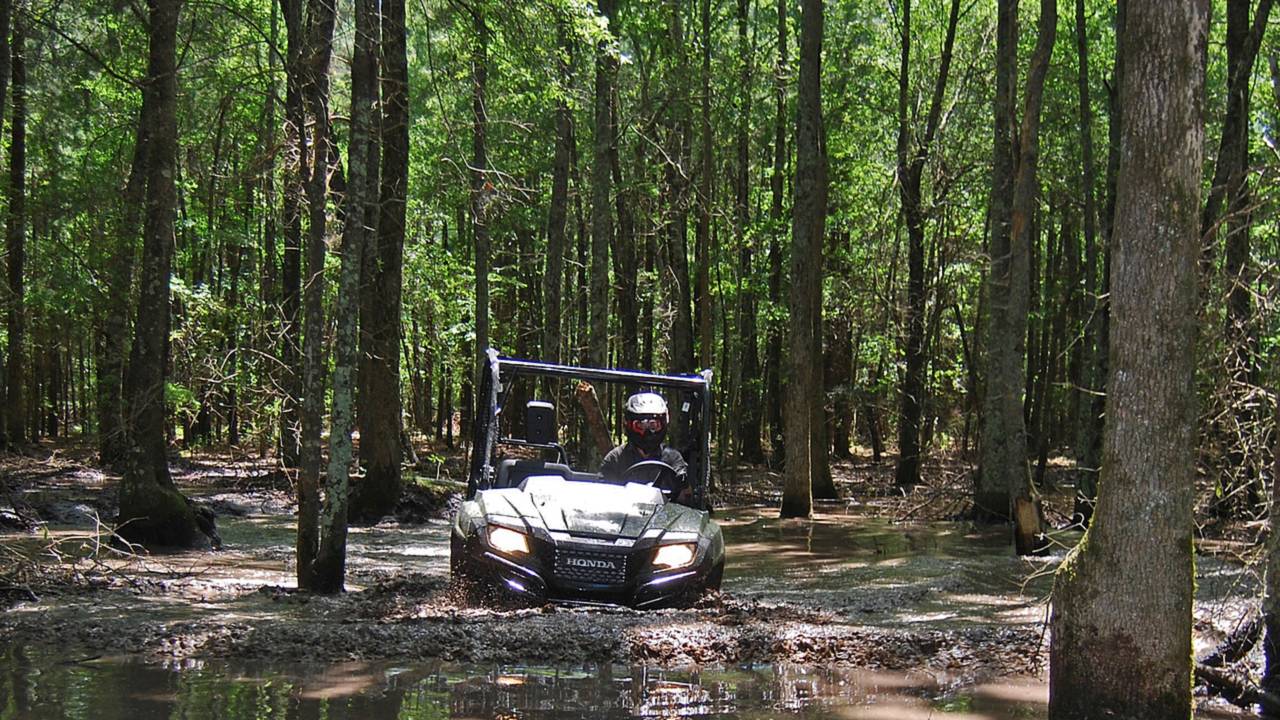 While performing very tight, three-point turns, the lack of power steering does require some significant effort.

The Pioneer is actually fairly unique in the market given its ability to serve as a four-passenger recreational vehicle or two-passenger utility vehicle. The new Yamaha Viking can only seat three, only haul 600lbs in its bed, but starting at $12,499 costs more. The Polaris Ranger 800 is a little more powerful and can tow and haul a little more weight, but doesn’t have the ability to carry four passengers while, at $11,399, coming in significantly more expensive than the 2P Pioneer. The John Deere Gator RSX850i is much more expensive at $12,999 and is more powerful than the Pioneer, but again lacks the ability to carry four and haul less weight in its bed. 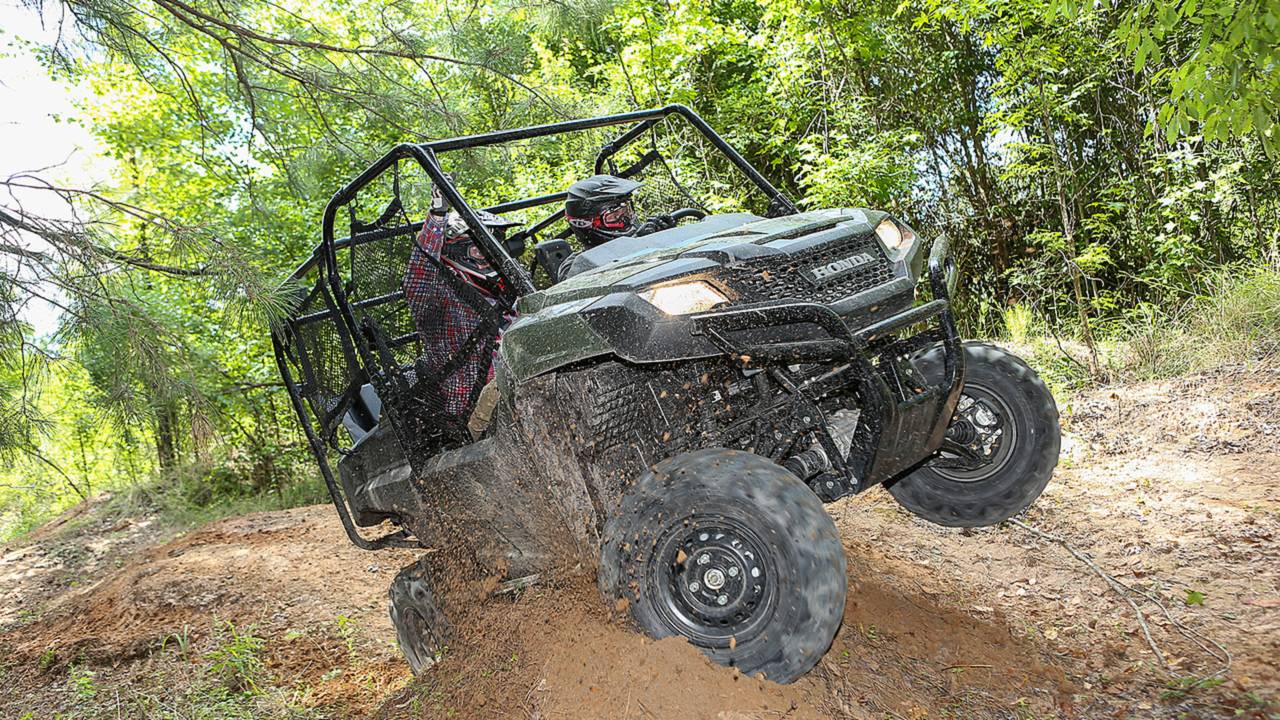 Delivering two extra seats in a package that’s lighter and more fun than Big Red, without sacrificing any of that model’s work capability, all at the same price, is a master stroke for Honda. The Pioneer isn’t a focused sports model, instead it’s a fun, versatile, useful vehicle that should expand the Side-by-Side appeal to the largest possible audience. One vehicle that can work and play while carrying up to four people.