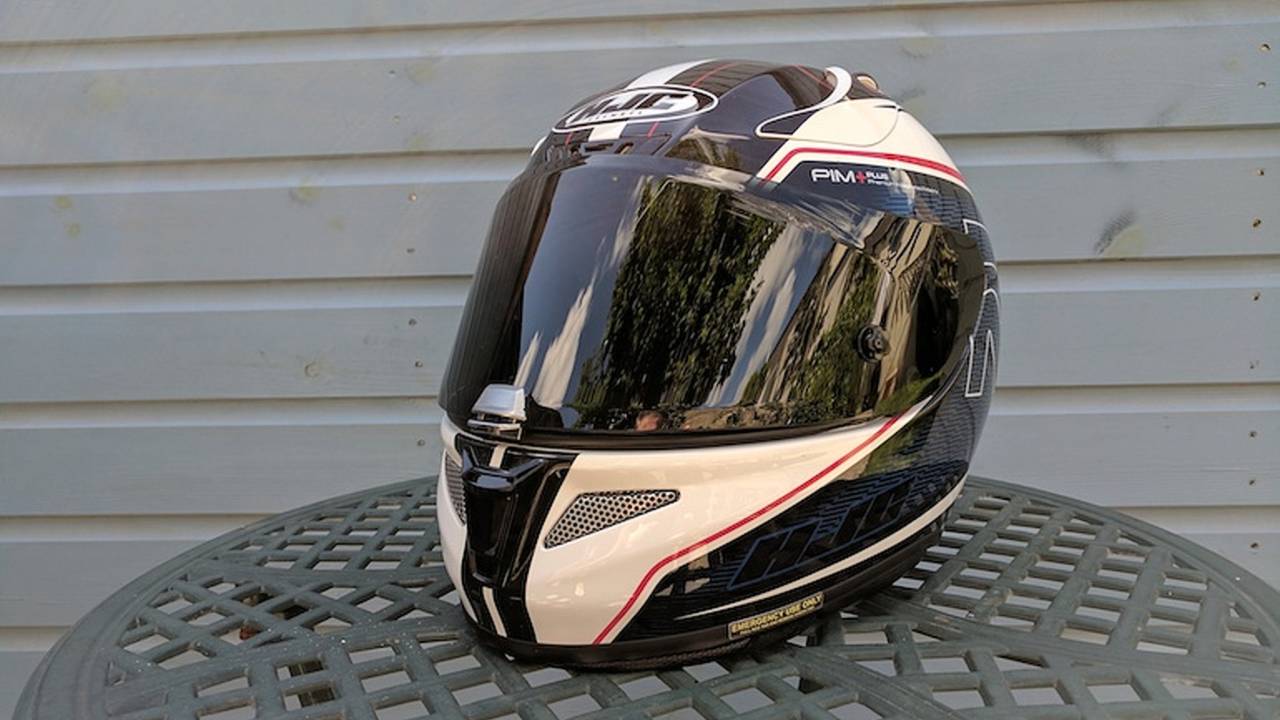 A crash-tested review of the stylish and comfortable HJC RPHA 11 Pro motorcycle helmet.

One of our goals here at RideApart is to deliver a site that’s informative, that helps you make good decisions about the bikes and gear for which you pony up your hard-earned dough.

But I’ll admit that when it comes to certain safety gear – like helmets – we’d kind of prefer to never have to find out whether it actually works. Because finding out if it works generally means crashing. Unfortunately, or fortunately, depending on your perspective, we sometimes do get a chance to find out – as was the case earlier this year when I binned a Harley-Davidson Street Rod (“binned,” get it?).

I’ve already told you how well the Pando Moto Boss 105 jeans I was wearing held up in that crash, but I thought it might be a good idea to share my experiences with some of the other items was wearing. For instance, the HJC RPHA 11 Pro helmet that protected my skull from the Florida asphalt. (Note: In some markets the helmet is known simply as the RPHA 11, but it appears to be the exact same helmet.)

HJC, of course, is based in South Korea (what my wife refers to as “Good Korea,” as opposed to “Naughty Korea”), and its helmets are made there. Which, to my mind, is a positive. A quick glance at the interwebs suggests South Korean workers enjoy certain rights like a minimum wage, paid leave, maternity leave, and pension benefits, and the country is ranked 24th on the Democracy Index – only three slots down from the United States. Hitherto seen as an affordable brand – as well as one that does a lot of pop culture tie-ins (e.g., its Cars 3 helmets, Star Wars helmets, and Marvel helmets) – HJC has more recently been making strides toward hitting the quality and expectations of higher-end lids.

International man of mystery Randle McMurphy earlier this year included the RPHA 11 Pro in his list of five helmets to consider for 2017, saying that the “quality and sex appeal” of the lid “is just ridiculous,” but identified some quibbles – a few with which I agree.

Certainly the helmet is gorgeous, looking fully worth its US $450 (€550) asking price. I always felt really cool wearing this thing and remain so enamored of its looks that I haven’t found the will to throw it away. Originally for this review I had planned to video myself attacking the helmet with a sledgehammer and, if need be, an axe, but I just can’t find the heart to do such a thing. It’s so pretty.

It’s also pretty comfortable. In his review, Randle said the RPHA 11 Pro had a “painfully tight fit, with easy fitment or removal impeded by the super small opening.” But I never found that to be the case. Wearing a large, it fit comfortably and never shifted in high-speed wind blast. Considerably lighter than the modular helmets I use day to day, I had no problem wearing this on long hauls.

I prefer ratchet-style chin straps (I know; I’m an old man in my soul), but the more traditional “double-D” fastener used on this helmet never really bothered me. Fleecey lining on the straps meant they never cut into my jaw and were actually kind of pleasant. Mmmm, softy on my face like a blankey…

The visor removal system has got to be the world’s easiest, which meant that switching out face shields took only seconds. Keep the visors in a tank bag and you could probably switch them out at a stop light without removing the helmet.

In the right conditions the helmet was blissfully quiet, but take note of that qualifier: “in the right conditions.” In less than optimal conditions things got chaotic. I have never before encountered a helmet with qualities so dependent upon head angle. HJC pitches this helmet as designed for “extreme performance at maximum speeds,” and as such it seems to work best when your head is canted forward, as it would be when racing.

The visor was scratched in my crash.

The best thing about the helmet, of course, is that it worked. I don’t think I hit my head very hard in the crash (I suffered no head-injury-related effects and don’t remember my head hitting anything), but a deep scratch on the visor and a broken bit on the back of the helmet are evidence that my noggin did at some point make contact with terra firma. The helmet stayed firmly attached and did not shift in the long period during which I was sliding and rolling down the highway.

Thanks to a number of concussions suffered during my rugby-playing years I am more susceptible to head injury, so the fact I suffered no ill effects in my crash leads me to believe the helmet must have absorbed a certain amount of impact.

I'm not really sure what to call this part, but it was also damaged in the crash.

The helmet has a small vent at the chin, a tiny vent at the forehead, and tiny vents located above each temple. Only the chin vent is easy to find with gloved hands, and even then it’s not very easy – especially when moving. Not that it matters, however, because once you finally get those ant-size vents open the difference in airflow is negligible.

Or, well, it feels negligible. But the anti-fog pinlock visor will start to fog up if you are sitting still at a light with all the vents closed. It will also give up the ghost after 20 minutes of riding in rain or in temperatures below 2C (35.6F).

Look how tiny that lock is (the black switch I'm pointing to with a ballpoint pen). I am only able to operate it with my fingernails. Who thought this was a good idea?

By far, the most infuriating thing about the RPHA 11 Pro, however, is its strange visor lock mechanism. I have never before seen this on a helmet; right at the center there is a little latch to keep the visor shut. The latch, to use a British phrase, is fiddly as f*ck, and seems destined to break within a year of purchase. If you’re careful. Worse, however, is that this latch has the world’s tiniest of locks – a 9mm x 1.5mm fingernail sliver of a switch that will thwart even those with the most nanoscopic of Trump hands – which you will manage to accidentally engage at the most inopportune moments.

Like when you’re stopped at a light in front of the world’s most impatient Audi A4 driver and the aforementioned ghost-giving pinlock visor has fogged up completely. So you try to flip up the visor, but nooooooooooo – it’s locked shut. It won’t open. You feel a sense of panic as you frantically slap at the visor, slowly being starved of oxygen. And it’s right at this point that the reddish tint of your world goes green; the light has changed but you can’t go anywhere because you are completely blind. Meanwhile, Mr. I’m Important Because I Paid A Lot For My Car is revving and honking like you’re preventing him from escaping the zombie apocalypse.

Man, I really don’t like that visor lock feature. I want to meet the person who designed it and pummel him with this otherwise very stylish, comfortable helmet.

I hate the visor lock system and would prefer chunkier vents, but overall I say the HJC RPHA 11 Pro is a lot of helmet for the price. If you ride upright (e.g. on a cruiser or ADV bike) you may want to consider different options, but those who ride bikes with slightly sportier ergonomics will find the helmet to be reasonably free of noise.

It did its job and protected me in a crash. Because of that crash it’s had to be retired, but it looks so good (it is especially sexy when its paint is sparkling in the sun) that I’m seriously considering getting another one.

Made in: South Korea

Worth the money? Yes.