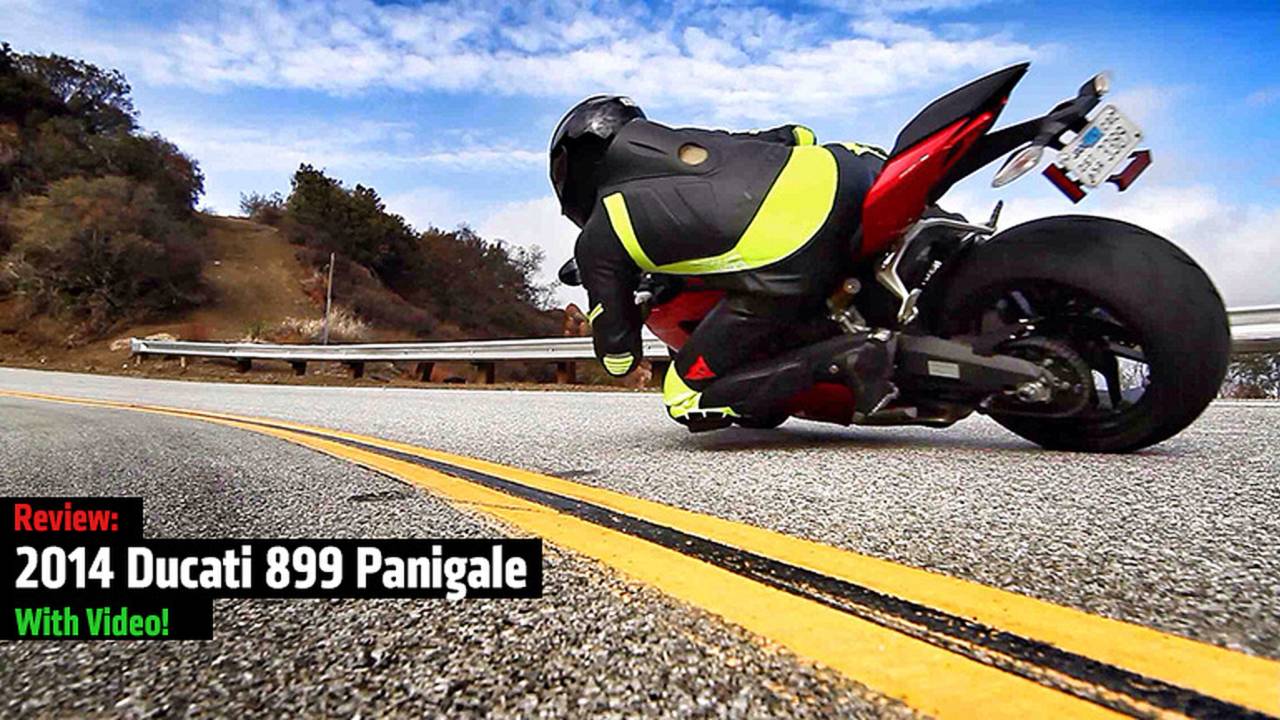 When we rode this bike at Imola — in the pouring rain — back in October, it looked like this smaller brother to the 1199 could actually be the better bike for us mere mortals. Can that hold true back here, in the real world? Let’s find out in this 2014 Ducati 899 Panigale review.

Take a Ducati 1199 Panigale and make the holes inside its engine smaller. Take advantage of its new, lower power output to sharpen up the chassis with a shorter wheelbase, steeper forks and a narrower rear tire. Take out some of the bling — the single-sided swingarm, LED headlamps and TFT dash — in the name of cost cutting, write “899” on the side and bob’s your uncle.

The idea is to offer riders the highlights of the Panigale package — its “frameless” design, futuristic styling and “Superquadro” V-Twin — without the intimidating, often unusable power and all the compromises that go with it.

From 1199 to 899, bore and stroke shrink from 112 x 60.8 mm to 100 x 57.2 mm. That has the effect of reducing power from 195 to 148 bhp and torque from 98.1 to 73 lb.-ft.. Importantly, the 899’s less over-square dimensions shift the torque curve down the rev range, giving you more bottom and mid-range to work. The smaller motor is actually the more flexible of the two, delivering something much closer to the traditional Ducati V-twin grunt.

Weight actually increases from 1199 to 899. Thanks to its single-sided swingarm, magnesium engine covers and aluminum rear subframe, the 1199 weighs 420 lbs (wet). The 899’s bulkier, double-sided swingarm, aluminum cases and steel subframe take its weight up to 425.5 lbs. What a porker!

We’re paraphrasing here, but Ducati more or less describes the 899 as an 1199 for the road. More linear, manageable power and more neutral handling are claimed to deliver a friendly, more easily exploitable package.

And how. Six corners into riding the 899 on a good road for the first time and I was dragging knee. This came as a surprise to me, as I was trying to ride conservatively and fully warm the tires up. That first drag happened with my leg in the wrong position, catching the ground hard as I was still turning in — it was just that unexpected — this took weight off the tire and upset the chassis, something the bike dealt with without actuating its TC, set in one of the lower intervention levels. Few bikes have ever inspired this much confidence so early or dealt with a ham-fisted mistake so easily.

A lot of that confidence and composure comes down to the suspension. What, at first blush, appears to be more budget friendly equipment than that fitted to the 1199 is actually just much more compliant. Front suspension is 43mm, fully-adjustable, USD Showa Big Piston Forks. The rear is also a fully-adjustable Show unit. Not as fancy as Ohlins, but man it gets the job done. Softer spring rates pared with quality damping do a great job at keeping the tires in contact with the road.

The fast steering combined with solid mid-corner stability is reminiscent of a Yamaha R6, just one with 27 bhp and 25 lb-ft more. All easily accessible and smoothly delivered. This is not a slow bike, but nor is it an intimidating one. The 899 works with you facilitate, fast, flowing, safe riding.

The 899 also gains a new seat shape, now covered in suede rather than slippery vinyl. It’s thicker, without impacting seat height, making it more butt friendly and proving at least half-day comfortable. It’s also fitted with a re-contoured shape; the edges are more pronounced and the whole thing appears a little slimmer. That helps you hang off and find the right body position.

The result of all that is a revelation. I reached the end of my usual fun riding route having ridden in more confidence than ever before, with greater corner speeds and also arrived in comfort. All that from a Ducati?!

The 899 wears Showa BPF forks and their unique adjusters.

Traffic-stopping good looks; you forget about that double-sided swingarm the second you hop on board.

Solid comfort. You won’t quite forget you’re riding a sportbike, but you’ll be doing so without numb body parts.

The same ABS, Traction Control, Electronic Brake Control, quickshift and Ride-By-Wire throttle as the 1199 are equally effective. Making the 899 a package which is as safe as it is fast.

And boy is this thing fast. 149 bhp was liter bike territory a decade ago and nearly as much power as the old Ducati 1098 superbike.

That 73 lb.-ft of torque is also delivered in a linear, flexible manner making progress through traffic and around town easy, too.

And you can tailor that performance to the riding conditions, selecting between the presets of Wet, Sport and Race or tailoring levels of electronic intervention independently. Doing so makes a discernable, effective difference in the bike’s aggression and your safety net.

Nothing about the bike feels smaller or lesser as you ride it. The engine will take the bike as fast as you care to go, just now, you’re in control, not it.

Compared to the 1199’s full-color, high-res Thin Film Transistor display, the old mono-color LCD off the 848 feels positively low rent. It gets the job done, but it’s not fancy.

Park the bike, step back and look at it side-on. Man is that swingarm bulky; it almost looks like it’s off another, larger bike.

You also see some of the cost cutting evident in things like the rear caliper mount. Pull the seat off and the tubular rear subframe looks like something off a budget commuter.

As with all current Ducatis, the foot pegs are way too slippery. Throw in some water and they’re positively lethal. Yes, we know Ducati would love to sell you some Corse replacements, but come on, you should at least be able to safely sit on the bike in stock form.

The UX in the dash is obtuse, confusing and frustrating. In a world of iPhones, why is this still such an issue?

Starting at $14,995, the 899 sheds $3,000 than the base Panigale. It’s the better bike, so that’s quite a deal. Trouble is, the more powerful, arguably more exotic Aprilia RSV4 R is $1,000 cheaper. It’s also $1,500 more than the Triumph Daytona 675 R, which does without electronics, but does with top-shelf Ohlins. I’d buy the Ducati, but its competition is very close.

Just a reminder that Wes can ride bikes too.

We said from Imola, “Accessibility doesn’t mean watering the experience down, it means making that experience easier to reach.” Back at home in California, this experience remains true. On the road where the 899 delivers superbike performance in confident ease rather than frustrating you with constant challenge. It’s everything everyone loves about the Panigale, you’ll just be able to love it confidently more of the time.

Boots: Dainese Axial Pro In ($500, best sport boots out there)