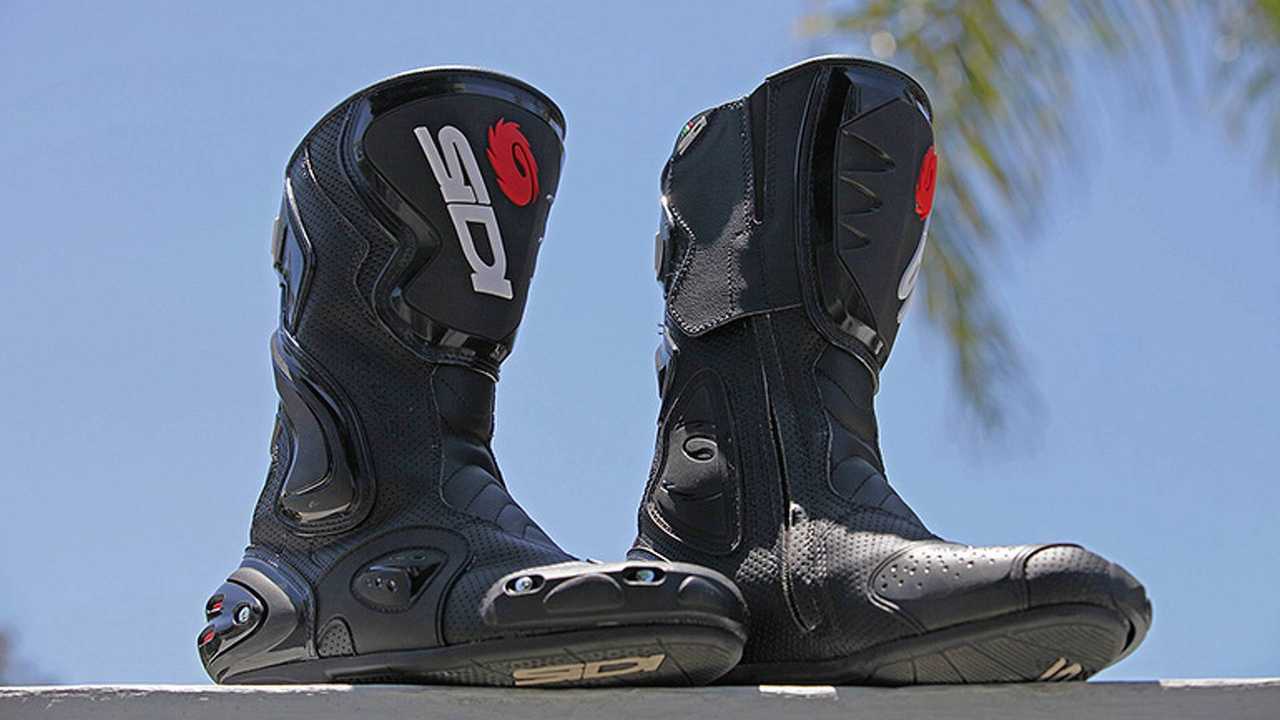 Gear Review: Sidi Cobra Air BootsWhen I first started riding, I used to suffer with whatever I put on my feet—it was usually with what the salesman...

When I first started riding, I used to suffer with whatever I put on my feet—it was usually with what the salesman recommended, and water-resistance was a prime concern. Since moving to California, one of the most important aspects of boot selection has become airflow. Yet, whether your feet are cold and damp or hot and sweaty, you’ll be distracted by poor footwear. So after my last set of full-length boots wore out, I decided to shop around and see what was available.

Currently, my preferred footwear is Alpinestars S-MX 1. These are short boots that offer good protection for the foot and ankle as well as a fabric section in the instep to allow great airflow. They’re ideal for riding to work or attending meetings where you don’t want to look as if you just jumped off a bike. They’re easy to walk in and keep you feet cool. My only reservation is the lack of leg and shin protection when commuting daily on the I-405 freeway. So I wanted something that could offer good airflow as well as full leg protection and decided to see what Sidi had to offer.

As it happens, Sidi has a range of “Air” boots that use a proprietary Technomicro outer shell. This is perforated for maximum airflow—as is the teflon lining—to keep your toes cool. This “Air” option is available on many of the boots in Sidi's range, including its top track footwear.

We opted for the Sidi Cobra Air, which is a top-of-the-range touring boot, allowing us a little more ankle movement when off the bike. It’s crammed with Sidi technology, such as the patented Vertebra System, which protects the rider’s Achilles tendon in the event of an accident by helping to prevent overextension. There is also thermoplastic resin ankle protection, designed to take a hit and survive abrasion.

There are bolt-on nylon scuff pads on the toe. These are intended to be replaceable and adjustable, allowing you to fit new ones on if you’re inclined to scrape your boot in the corners. The shock-absorbing heel cup is also replaceable.

Nylon is additionally used for the inner sole, which has a removable arch support pad, and there is a nylon shin deflector plate. The latter seems pretty sturdy and would give a level of protection in a collision. And let’s not forget the padded Achilles area or the DuPont polymer toe shift pad, which should stand the test of time.

The dual-compound rubber sole offers some cushioning when walking, and naturally, the boots are double-stitched in all high-stress areas. There’s an elastic panel adjacent to the zipper, allowing the zip to move freely and for improved fit. There’s also a Velcro flap at the top of the zipper for extra comfort and to accommodate pants if you choose to tuck-in.

Toe sliders are replaceable and adjustable, if you’re inclined to drag your toes in corners

As we all know, breaking-in new boots can be a painful process, but I’m pleased to report no such problems with the Sidi Cobra Air. The boots are supple where they need to be, making them fit snug, but without any protrusions to rub your skin.

Walking down steps is a bit challenging because of the slightly restricted movement, but this is designed to protect your ankle area in a collision, so it’s a small sacrifice. The lining is comfortable and the instep is generous, giving you lots of support for both riding and walking.

The biggest test for these boots was going to be airflow. With the underseat exhausts kicking out tons of heat on my R1, getting good airflow is essential to comfort—especially in the summer months.

While there is a degree of air movement, it’s not nearly as good as my current Alpinestars S-MX 1. Those boots seem to draw in cool air, whereas the Sidi Cobra Air has to be stuck into the airstream to get a significant cooling effect. So when you’re feet are on the pegs and protected by the fairing, you don’t really feel much air movement. That said, they’re cooler than a conventional non-perforated boot, but not as effective as I’d hoped.

Something else I’ve noted is that the knee pads in some motorcycle jeans come down rather long, causing some bunching around the top of the boot. It’s not uncomfortable and it would happen with most boots of this kind, but it's something to consider when choosing boots and jeans

I’d be remiss not mention something else… full disclosure: These aren’t my first pair of Sidi boots. In fact, it’s my third. The previous two were retired because they didn’t stand up well to daily use. To be precise, the boots were fine, but the peripherals were not.

Contrasting the new Sidi Cobra Air with one of its predecessors. Both offer similar technologies. Yellowing of white areas on older boot is to be noted.

My most recent pair—the name of which escapes me—appear to be a predecessor to the Cobra. They have similar features but without the “Air” perforations. However, the zipper soon broke on one boot causing me to improvise with a large paperclip. I could have dealt with this inconvenience and eventually upgraded to a ziptie if it weren’t for the other problem…

The greatest annoyance was with the bolt-on toe pucks. While walking, I accidentally knocked one against a kerbstone and dislodged it. Rather than be replaceable, it appeared to damage the screw threads in the boot and would not allow it to be tightened sufficiently. Subsequently, every time I touched the side of the boot against something, the puck would come loose and flap around as I walked.

Zip soon broke on older Sidi, replaced with paperclip. However, greatest annoyance was the dislodged toe slider that couldn’t be secured in place

Probably the easiest solution would be to remove the puck altogether, but I felt this compromised the protection around the toe area. So the boots were put away in favor of other options.

You might also note the distinct yellowing of the white logo areas on the older boot in the photo. This is despite being covered by jeans during the majority of their use.

The Sidi Cobra Air is a comfortable boot with decent foot, ankle and leg protection. They don’t require any break-in period and have been easy to use on the bike and when walking. The quoted size is about right, not coming up small, offering a good fit.

The design is stylish and features plenty of safety technology, putting them ahead of many alternatives. The perforated outer is a bonus, which will be more appreciated on bikes with less wind protection.

We are hopeful that long-term quality problems have been resolved, allowing these boots to provide a good service life for years to come, especially since the price is very competitive for the quality of the boots.

MUST READ:  Great Multi-tools for On and Off-Road Repairs | RideApart

Zip soon broke on older Sidi, replaced with paperclip. However, greatest annoyance was the dislodged toe slider that couldn’t be secured in place

The MSRP for the Sidi Cobra Air is $260. The boots are available in sizes 6 to 15 and only in black.