The Future of Motorcycling, We Ride the Honda NM4 - Review

The new and one-of-a-kind Honda NM4 is a love-it or hate-it bike. So what did we think?

I exited off the 105 highway, where it dead ends into Norwalk California, Bell Bullitt helmet on my head and Mini Buran shoulder bag thrown over my lap. Despite the girth of the fairing, I had just spent the last 45 minutes flying down the 110 South to the 105 East, my normal daily commute from our Hollywood offices.

Traffic was moving slow toward a redlight, as a beat-up Honda civic tried desperately to get alongside. I slipped the throttle and move forward, as the car did the same. I immediately began rehearsing my ride in my head, trying to remember how many fingers I gave to those breaking the solid double-yellow line from the car pool lane, or if I yelled at someone to get off their phone. I turned, prepared for a berating from a disgruntled cager to see two young Hispanic guys with equally big grins, desperately try to roll down their apparently broken window. 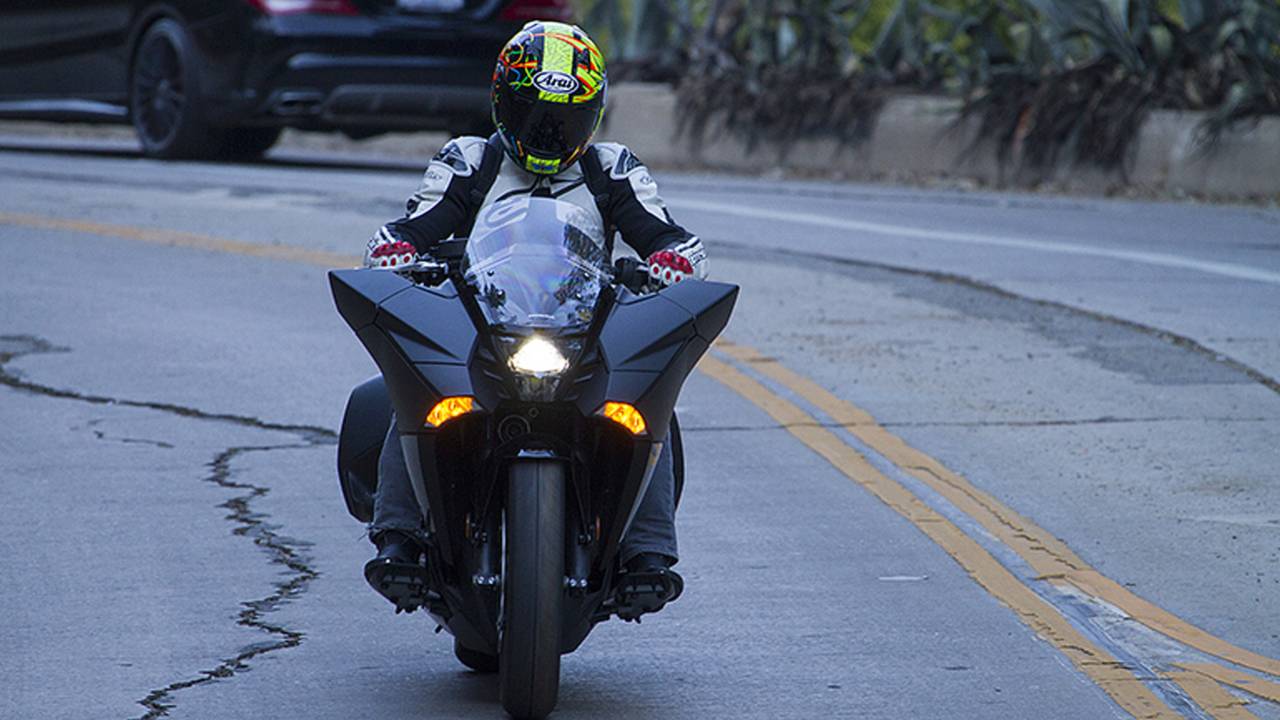 “Hey! What is that thing?” the passenger yelled with his lips stretched to the little crack at the top of the window.

“Cool, dude!” They both gave me thumbs of approval.

They were at that adolescent age when you’re never really that excited about something unless you’re being sarcastic. I believed their enthusiasm was genuine, but it got me thinking about the bike. The Honda NM4 Vultus, which in Latin means expression or facial expression, was conceived by a young group of Honda designers who heavily based the bike off of the futuristic motorcycles found in an anime film, Akira.

It essentially was built as a concept bike, one that Honda realized it could produce with minimal risk and investment. Under the skin, the NM4 is based off of the CTX700 and NC700, which are both offered as DCT (automatic) or traditional hand-clutch manual. The NM4 has a little more rake and wheelbase, and of course a different ride height to the NC700 and different fairings and subframe than either bike. The NM4 does not come with a manual option.

The bike is a harsh expression that leaves people with feelings of want or hatred, no in between. The NM4 does not evoke feelings of “meh.”

This is how I felt as I continually had someone relate the bike to a scooter.

Many immediately wrote the bike off as a scooter (just scroll down; I’m sure by the time you read this, there’ll be comments already), and maybe it has some resemblance in that like a scooter it’s fun, insanely easy to ride and I’m not sure if I’d want my buddies to see me riding it. 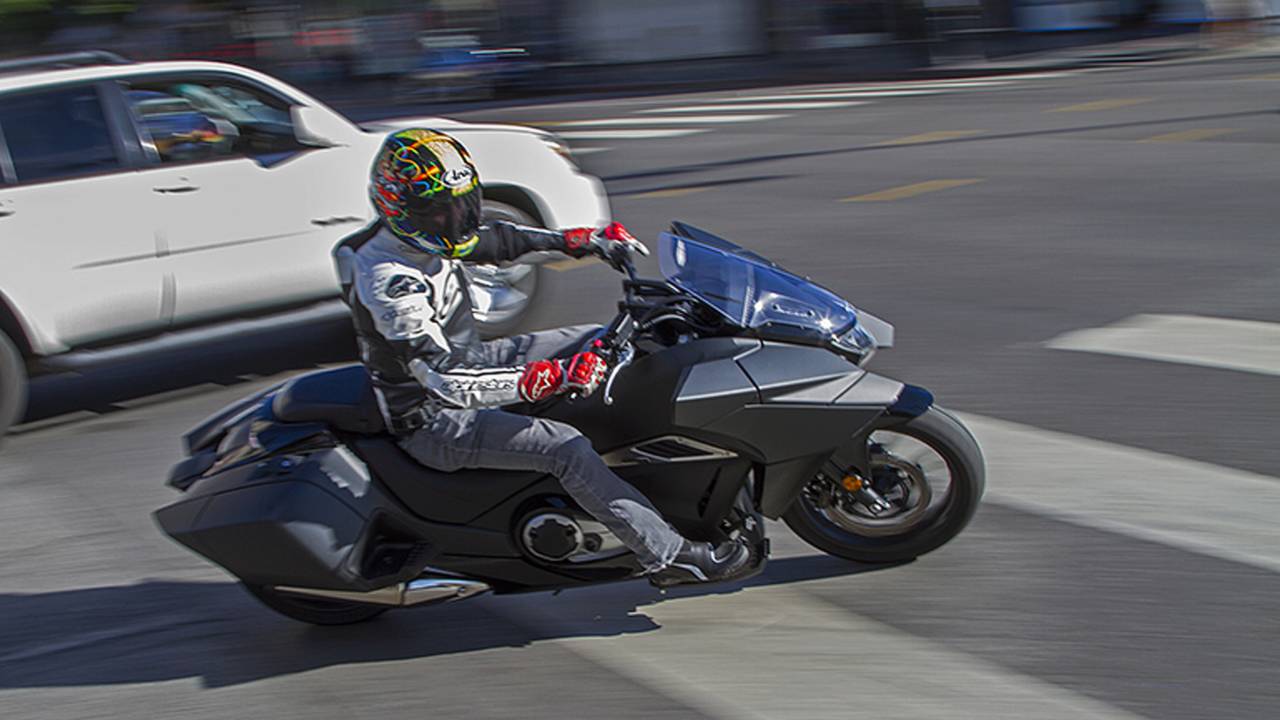 Me personally, I don’t mind the looks, but I’m a firm believer in form following function, so it’s only cool if it works.

As with most loaner bikes, the first few hundred miles involved commuting, something this bike does exceptionally well. I think Honda felt bad that we hadn’t ridden the bike yet as there was no formal launch or media ride so we talked them into letting us ride it for about a month, driving up and down the LA freeways with the occasional weekend lunch trip into the mountains. We didn’t see too many curvy roads, but it was hard to drag the pegs once. It has a surprisingly awesome lean angle. 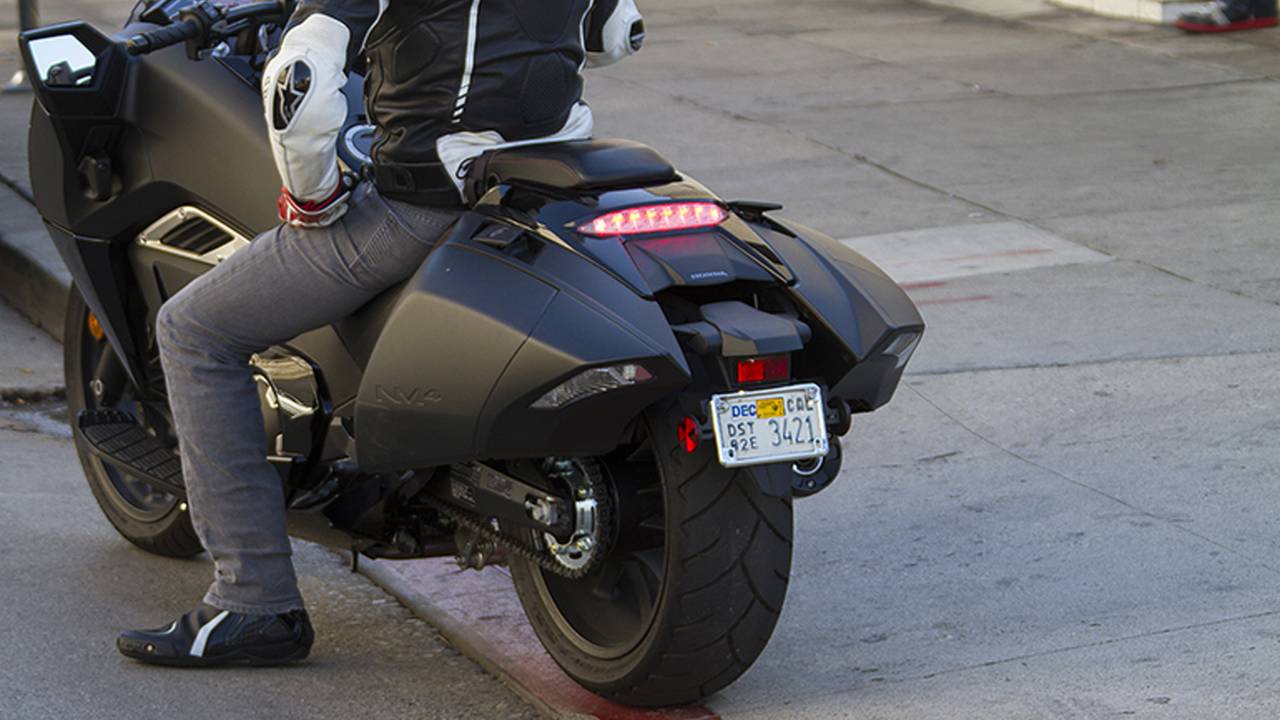 Yes, it is an automatic, and you do sit inside the bike like a Gurney Alligator, way down into the frame with your butt right on the transmission and the engine in front of you. The rear seat snaps up as an adjustable back rest, resulting in insanely comfortable ergonomics. I wanted to take a nap at every stop light. 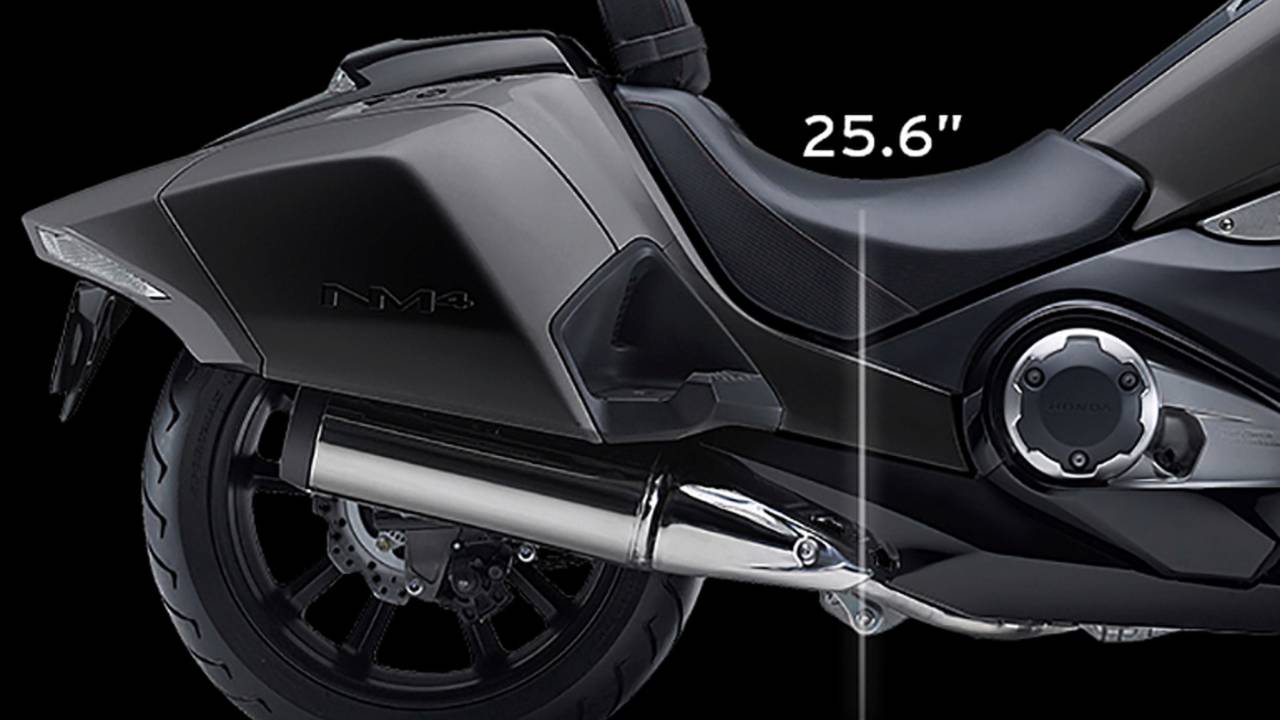 But it’s not a scooter - it has the weight, feel, lean angle and power of a full-sized motorcycle. How many scooters use an 18 inch front wheel and 200mm wide rear tire? Few scooters can bank hard onto a long highway entrance ramp at 90mph.

Weighing in at 562 pounds (which is the exact same weight as a new Harley-Davidson Sportster), it was nice to have that heavy weight. It made the bike feel real, solid and stable especially on the highway. The bike, as with the NC700 and CTX700, has its engine leaning forward and low in the frame; the rider’s weight is also low and the platform is somewhat narrow, making it a very well balanced motorcycle. The weight was never an issue in any riding situation. 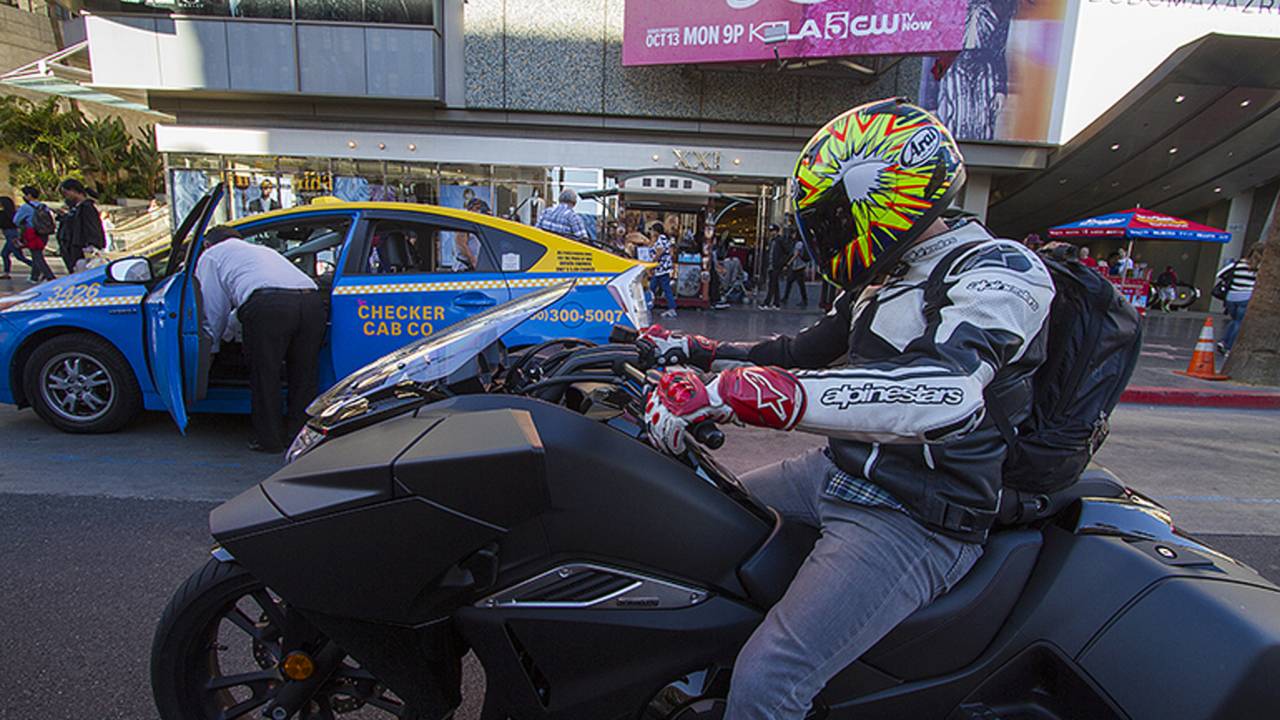 The low, leaned back cruiser feel makes you nervous that you’re going to snag a peg. When Bruce Speedman rode the bike for the riding pictures you see in the post, he constantly was worried he was going to snag a peg in tight turnarounds, but luckily that never happened.

The NM4 felt like it had a ridiculous amount of lean angle and the big rear tire would roll over for a long ways. You’d never normally feel the rear tire, until you really get into a hard banking, then you’ll need slightly more effort to get her on the edge of the tire. 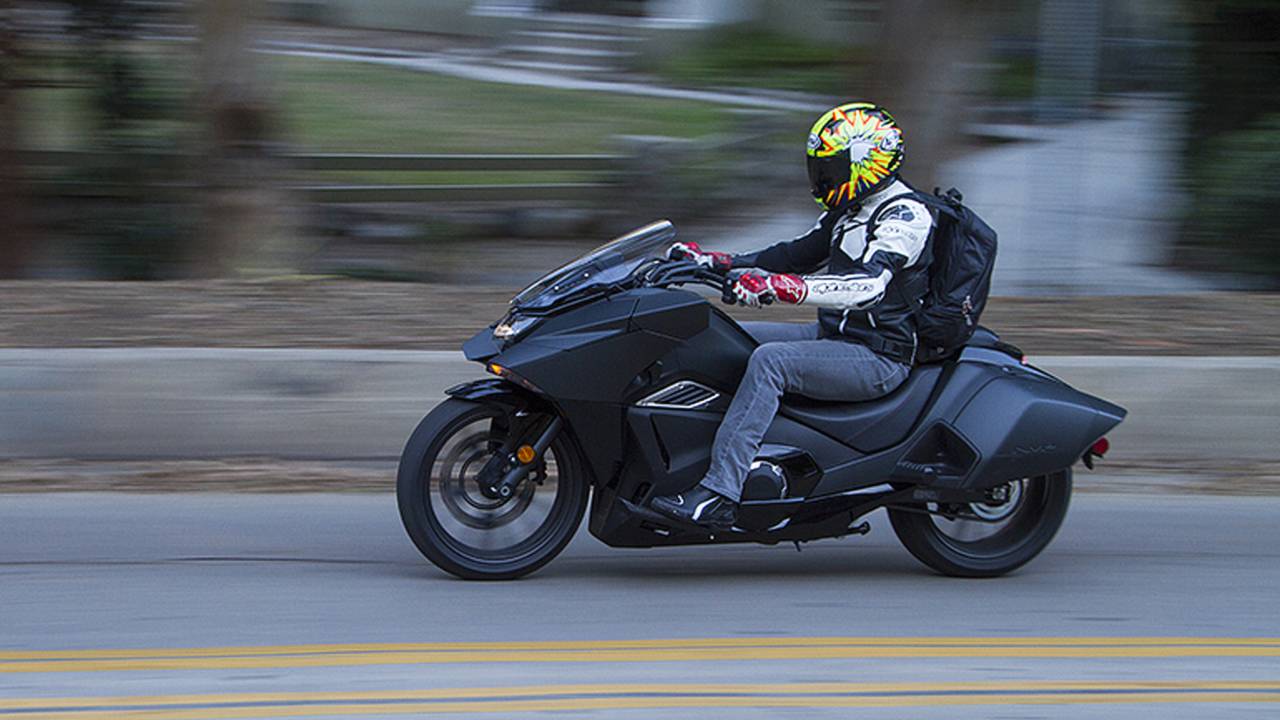 No Clutch, No Problem - The Engine/The Electronics

It’s far from liter-bike fast, but the super-quick shifting makes up for the lack of raw horespower. The NM4’s 670cc is the same you’d find in the NC700 and the CTX700, which is also available with the DTC automatic.

The NM4 is a people mover, and it’ll spoil you, with no clutch, a backrest, floorboards and a low seat. The electronics and more importantly the power delivery through the dual clutch system is so spot-on and quick shifting, you won’t miss the clutch lever. 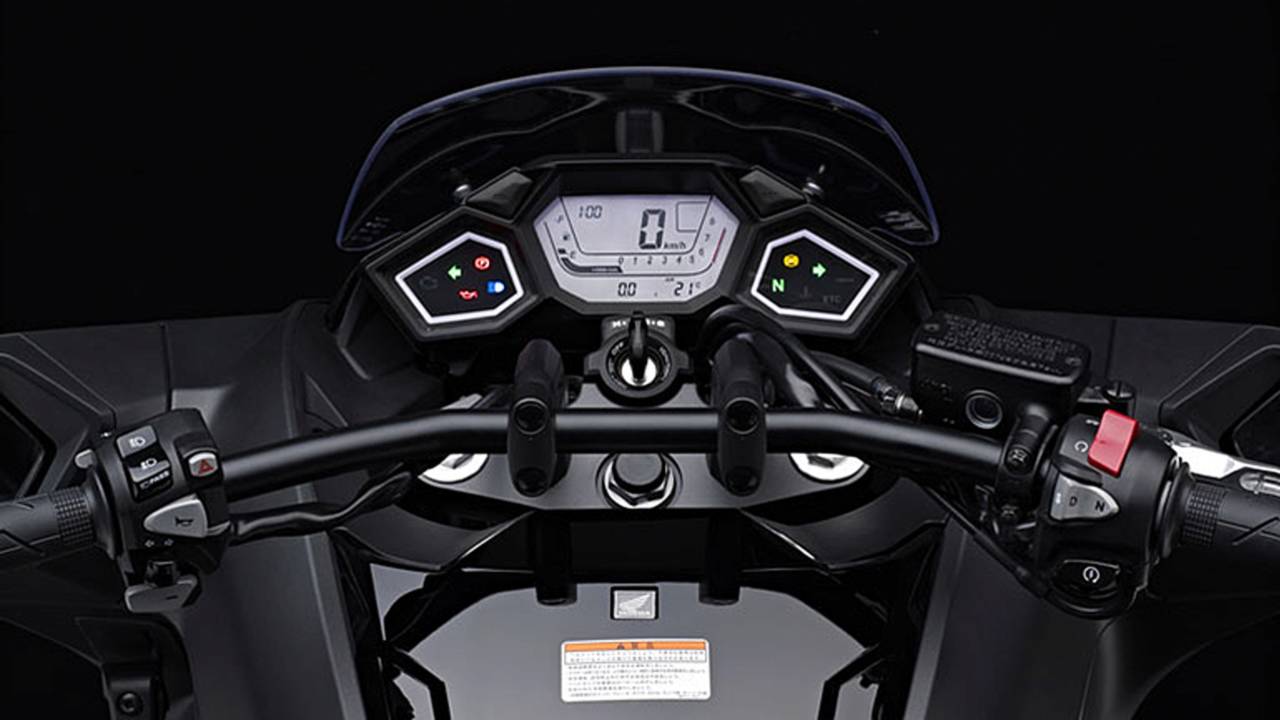 The start from a dead spot has a perfect mix of smooth and seat-pinning torque. It feels similar to a performance torque convertor like you’d find in a muscle car. Power comes on steady and smoothly according to the level of throttle input.

When stopped it’ll remain still and in neutral; you won’t accidentally sling yourself into traffic if you grab a handful of throttle. It has some slight lag, but you can preload it by spinning the transmission up a few hundred rpms before taking off.

Every time the bike cranks, no matter how you left it, it’s in neutral. Simple select Drive or Sport Mode via a push-button on the right grip. "Drive" will save you on fuel economy, but not be nearly as fun as "Sport," which will hang in a low gear, making it easy to split lanes and pass other cars. 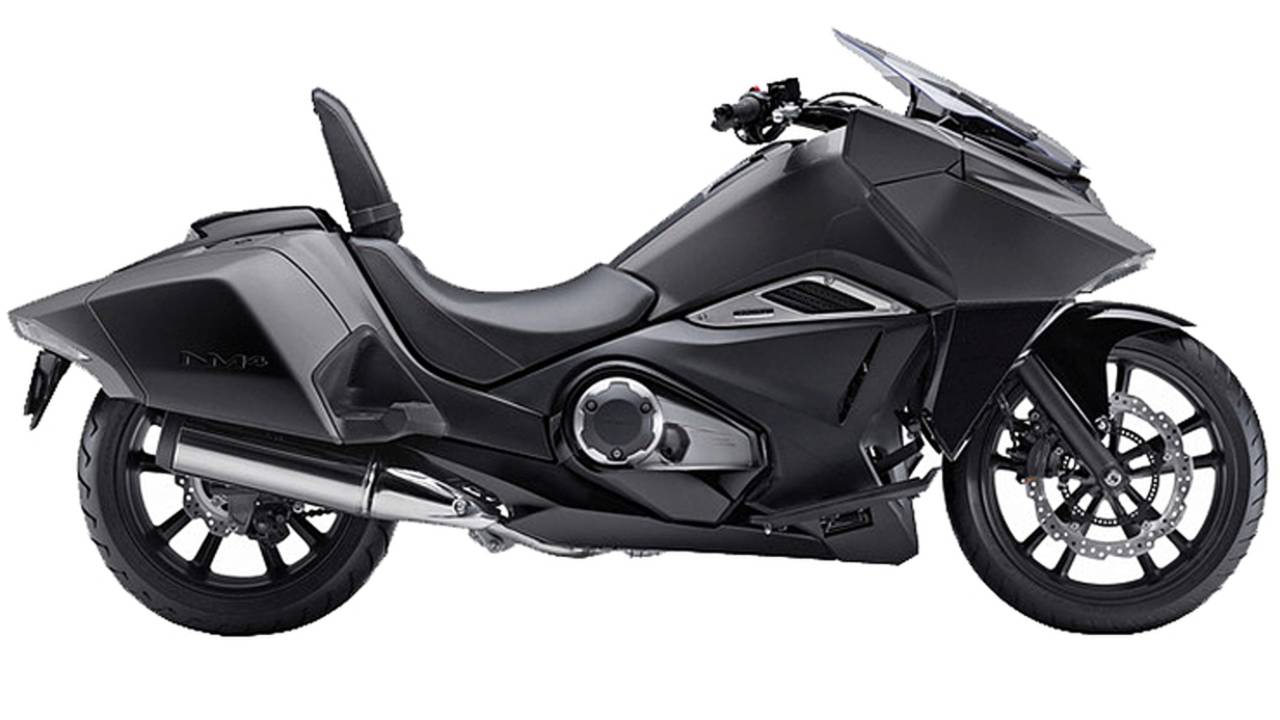 It has an override ability similar to a ‘Tiptronic,’ ‘Geartronic,’ or ‘Touchshift’ you’d find in a high end car, where you can shift via the push button controls on the left grip, but when you’re in auto (Sport or Drive modes), you’re limited in your shifts and the transmission will take over automatically. The electronics were super simple. You can leave it in Drive mode, and downshift to pass a slow car, then do nothing else, it'll override controls from there.

In fully manual, selected through the gear-selector button on the right hand control, you must shift up and down via the plus and minus buttons on the left controls. Here you can bounce off the rev limiter and you’re in full control of the gear box, with no override from the system.

Here is where the bike misses the mark as a performer. The front handlebars right off the bat have a cheap, small appearance and riding it doesn’t inspire much confidence either. 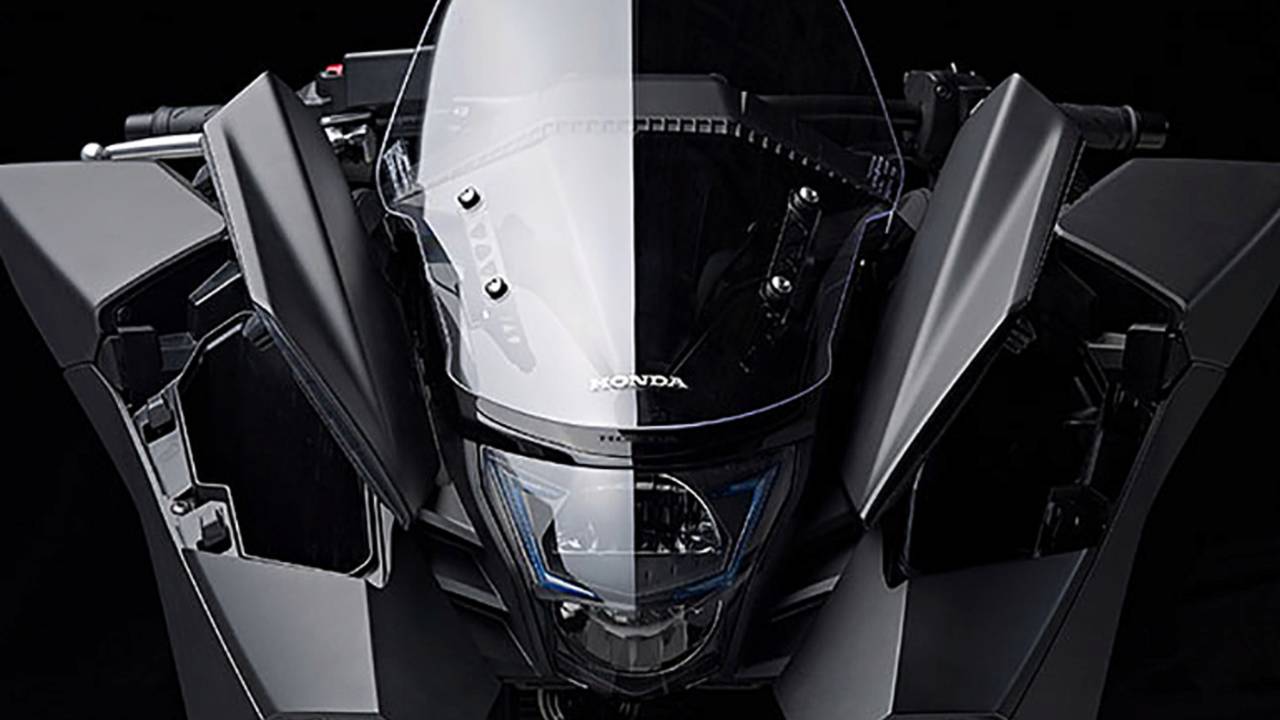 We experienced the occasional head-shake when letting go of the bars with one hand and slowing down. Never severe, but a sign of a cheap front suspension with 43mm front forks. It did always remain planted, and I personally would have liked more rake in the front end, but more rake would come at the sacrifice of parking-lot agility.

As much as we didn’t like the front end, it did do some things exceptionally well, like keeping our feet on the floorboards when moving super slow.

The storage was laughably small. The front fairing has two, push-button compartments, one lockable, on either side of the headlight. This was nice for house keys, wallet and warm gloves, but you'll be lucky to fit a pair of gauntlet gloves in one compartment. The saddle bags weren’t much better; I picked up two paperback books and couldn’t fit them in one bag. 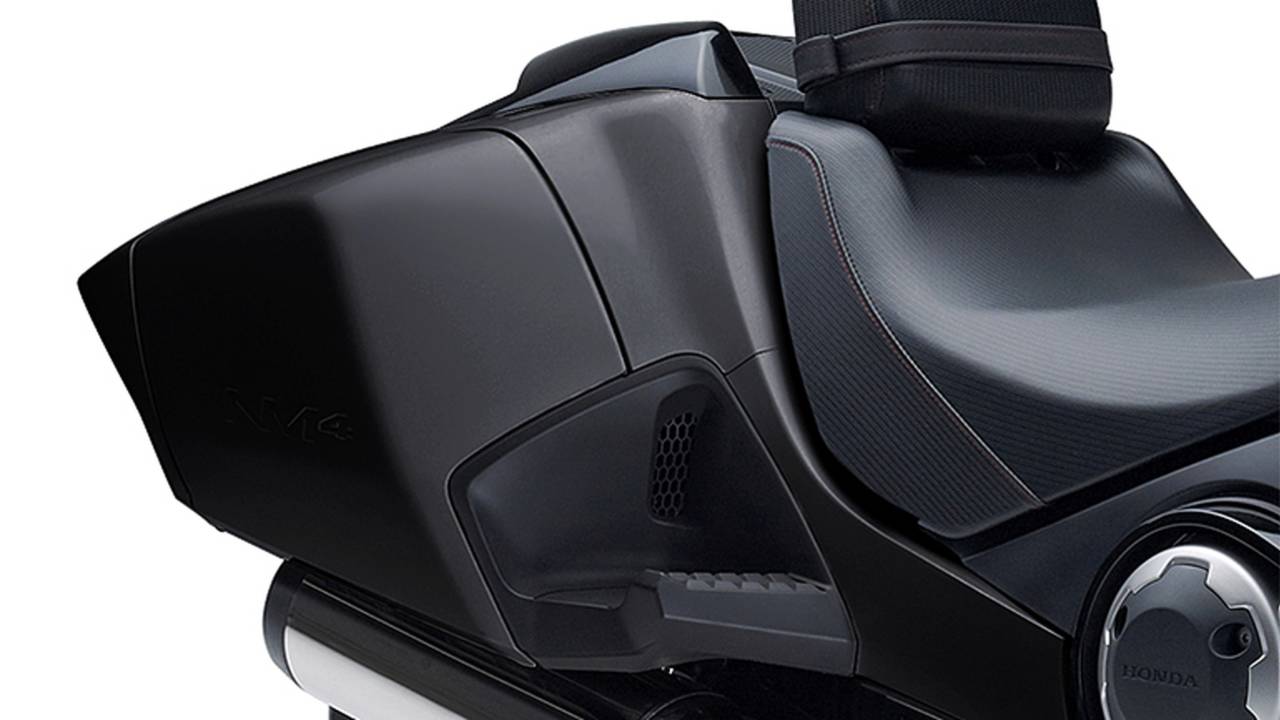 Honda says storage is targeted for “urban” riding. It was a let down, but that alone shouldn’t cause a lost sale.

The fuel economy was great, but the tank was very small; it’s rated at 3.06 gallons, which came to my surprise because I rode it before knowing that spec. The low-fuel light comes on very early. The weird angle of the tank made it difficult to fill and I was only about to get in maybe 1.8 gallons after the low-fuel light came on. 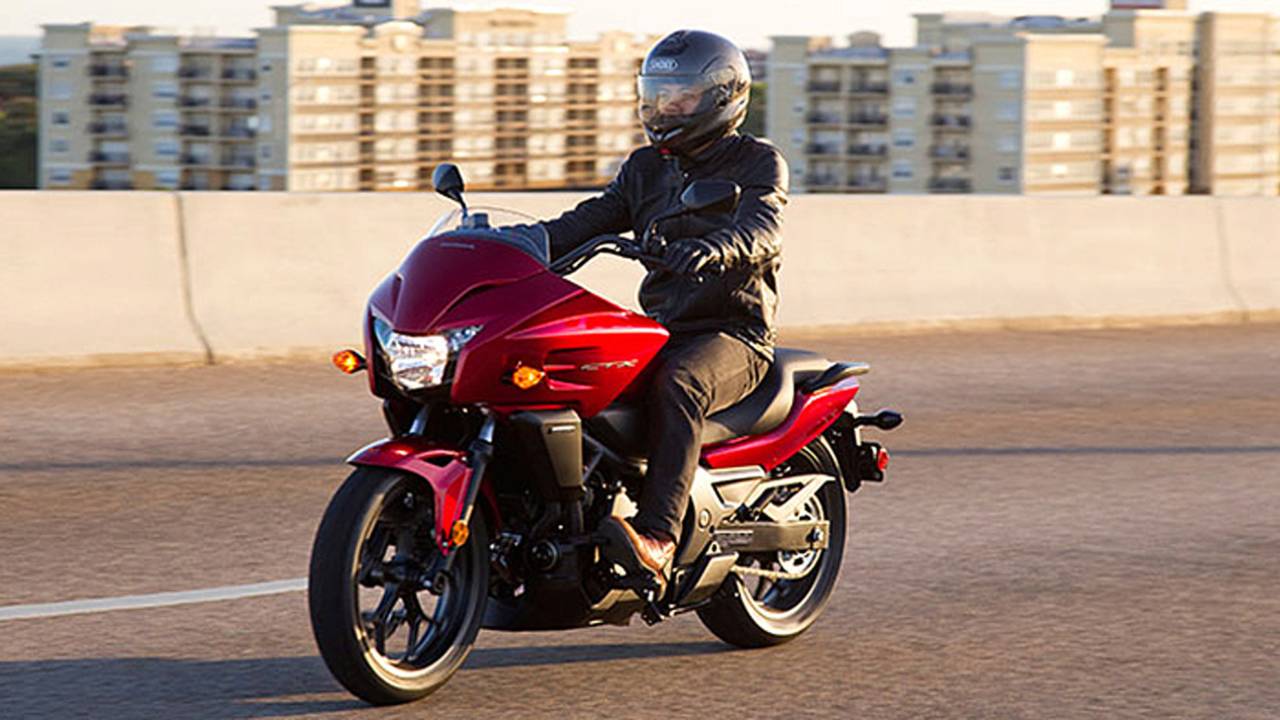 I loved this bike. You can keep up in the mountains on a Sunday, have a great commute to work and ride basically anywhere. The storage is laughably small, the price is a bit high and the front suspension is lacking, but this is far from a track competitor.

If you look at this bike and aren’t immediately blown away by the styling and wish for a more traditional look, invest in the CTX700. But, like many car and motorcycle manufacturers, this may have been Honda’s point in the first place. Chevrolet builds the Z/28 to sell V6 Camaros, and the same goes for the NM4; it’s an attention-getting machine that will hopefully convert more cagers to riders… or maybe just Honda owners. 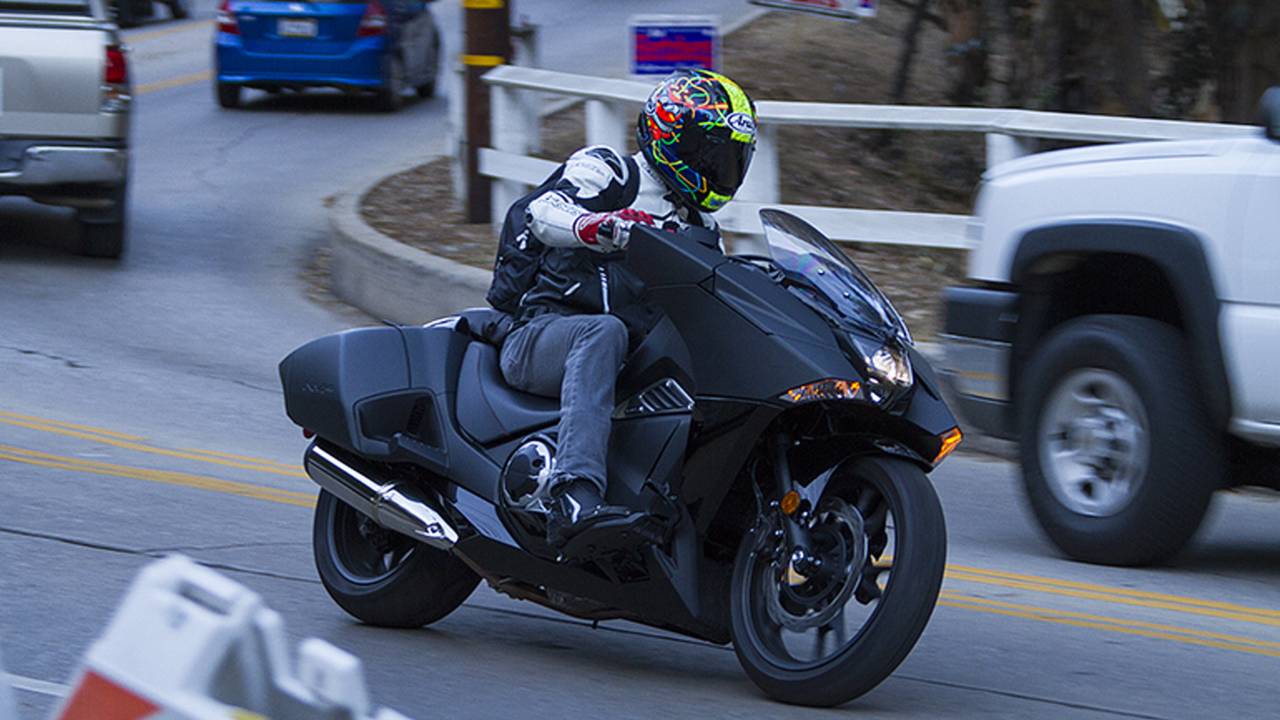 Pictures by Honda and Jesse Kiser with Bruce Speedman riding.

Every rider has his or her own style, size and weight. We put things in perspective and show what each reviewer weighs and their experience.