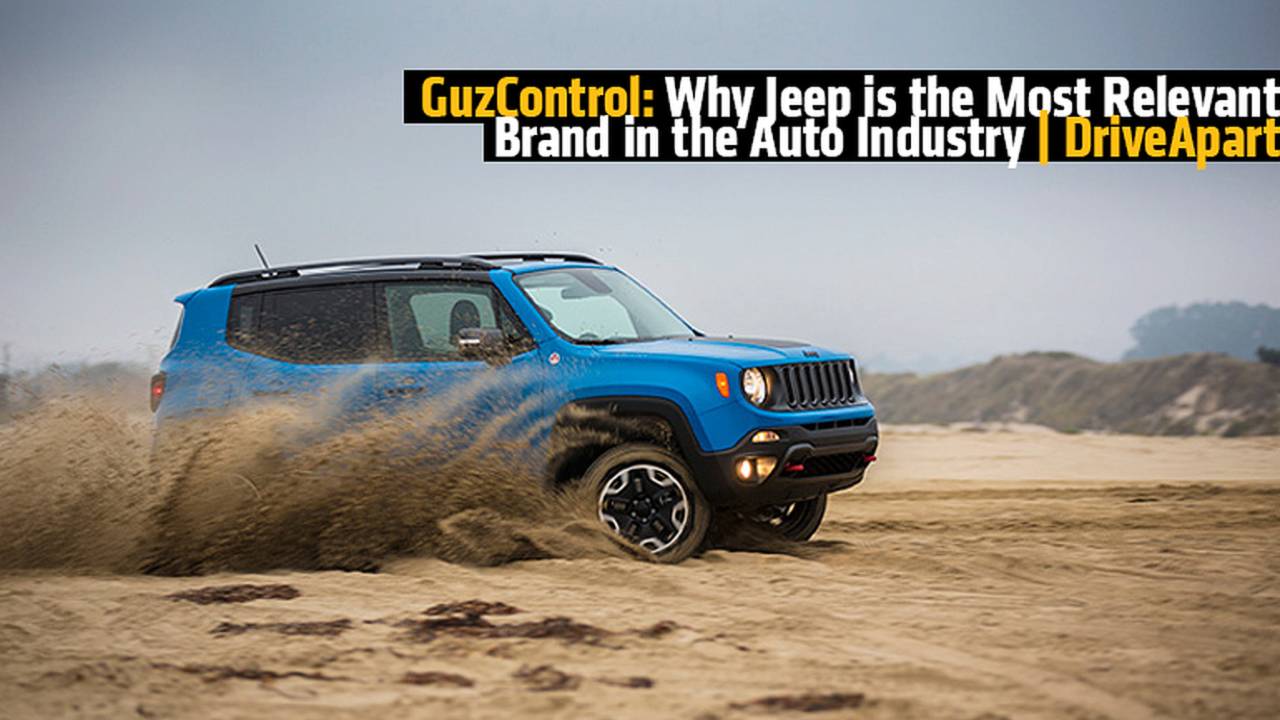 Learn more about Jeep's rich history and also why Jeep is the most relevant brand in the automotive industry.

The RideApart/DriveApart office is located smack-dab in California—not just California mind you—but Southern California. This is where outdoor and surf culture hold a powerful sway on the psyche of the entire region, even here from our landlocked office in the middle of Hollywood.

While you could say the Mercedes-Benz S-Class and Tesla Model S could be the official cars of some parts of LA (looking at you Beverly Hills), there are only a handful of cars that stand out for the sea, surf, and outdoor set— and I’m not looking at you wrongly named Chevy Malibu.

It’s the outdoors that drive people to California—or, at least, to live the California lifestyle. And if you’re looking for something that does a little of everything—such as a veritable Everyday Carry for the car set—then look to the iconic Jeep brand to fill your needs.

READ MORE: A Crossover That Acts Like a Sportscar: 2015 Mazda CX-5 Review | RideApart

But first, some history: Back in the halcyon days of the 1950s, you had your idealized version of the surf car with the Ford Country Squire, aka “The Woodie,” and it's now seen on the backs of corpulent men wearing Hawaiian shirts on vacation the world over. A decade later, in the Endless Summer of the 60s, it was the VW Microbus—usually in a sun-faded orange color—loaded for bear, ready to hit the waves while billowing clouds of weed stank putted along the highway. If you were really cool in the same era, you’d had a late 60s/early 70’s Ford Bronco with the roof off and a bikini-clad girl beside you. Not a bad life if you could get it.

But truly, in the 70s and 80s, there really was come summertime, come hell or high water, come big waves and tasty sets, come camping in Yosemite and rafting down the South Fork of the American River. There was no better vehicle to take up and down the Golden State than a Jeep—preferably a CJ-5 with the doors off, bikini top, big old Mickey Thompson wheels , a sick lift kit, and the interior sticky with sandy grit from Mr. Zog’s Sex Wax. The CJ-5 was the vehicle...no scratch that...still is the automotive grail for a lot of people.

Back when I was a kid, there was something transcendent about a Jeep, especially when it came to those iconic early CJ models and the now cooler-than-thou Jeep Grand Wagoneer (preferably in navy blue over tan, with the faux wood sides. A Prepsters dream car.) The Jeep—like a pair of Khakis—symbolized military garb gone civilian: cool. And in SoCal, we couldn’t get enough of it.

Jeep, like much of the automotive industry, fell onto some serious hard times a few years back. We had a worldwide economic collapse that rippled into slower car sales, a general automotive malaise, and multiple automotive bankruptcies. The cars? They were not so good. The brands? They did suffer and lo, times were dark.

Flash-forward to now and it’s a whole lot better. The Jeep division is now part of Fiat Chrysler America and the brand has roared back to life thanks to some pretty sweet product like the Grand Cherokee (the smaller Cherokee), the awesome and totally covetable Wrangler, and the new 2015 Jeep Renegade—a tiny "cute-Ute" with a beating heart of dirt.

Ah, it’s the Renegade that stole my heart recently on a first drive through the rutted dirt trails of the Hollister Hills SRVA—about an hour outside of San Jose, CA. I loved the little Renegade, from its Lego meets cartoon "Ute" design, all the way up to the way it drove. It’s a perfect little attempt at modernizing the brand and connecting to the next generation of Jeep buyers.

On the day out with the Jeep, I had a chance to drive both the upmarket and fancy limited model. I also drove the off-road ready Trailhawk version, which I took up and down the hills of the SRVA for hours on end. I liked them both.

The Renegade has a lot of neat features like an ingenious "My Sky" sunroof package, a plethora of engine and transmission options—a six-speed manual mated to an I-4 four cylinder turbo engine—and a really well-designed and thought-out packaging outside and in.

Aside from a smallish 2000-lbs towing capacity, the designed in the US of A and built in Italy Jeep Renegade is a total win, especially at its $17,995 starting price. Also, did I mention I loved the way it looks? If we had it at our RideApart/DriveApart offices to customize, I think we could make the perfect outdoor weekend warrior mobile.

It’s not just the Renegade that has us more lathered up than Seabiscuit after running a mile and a half in the rain—the whole dang Jeep lineup is great.

To wit: The Grand Cherokee was fully refreshed for the 2013 model year and if you’re in the market for a full size SUV, you can do no wrong. We REALLY like the nutso-crazy and superfast $64,595 SRT model (who doesn’t?) with its 470 horsepower engine and more power than you really know what to do with. It’s fast, looks great and is as much fun as a barrel of monkeys racing go carts off road. Or try the diesel-powered version with some of the best gas mileage of any SUV on the market. These two models are the Yin and Yang of the line up: fast and gas-guzzling; or not as fast, but awfully fun to drive. The all-new and smaller Cherokee is a great smaller alternative, especially in the rock-crawling capable Trailhawk guise, and it was one of our cars of the year in 2014.

If you really want something to shout "surf’s up, man," then choose the real sweetheart of the Jeep lineup, the Wrangler. If you want four-door sunshine, select the Wrangler Unlimited. To us, nothing screams outdoors like a Jeep with a soft top, so throw the surfboard in the back, and away you go...all the way up to the 'Bu to catch some cool waves, brah. We’d also opt for the top of the range Rubicon version, in a black on black configuration with a hard shell top.

Seriously though, the Wrangler Unlimited gives you Mercedes Benz G63 looks at less than a quarter of the price. Imagine having surf, sun, sand, and looking good in the outdoors on a major budget. Who could ask for anything more?