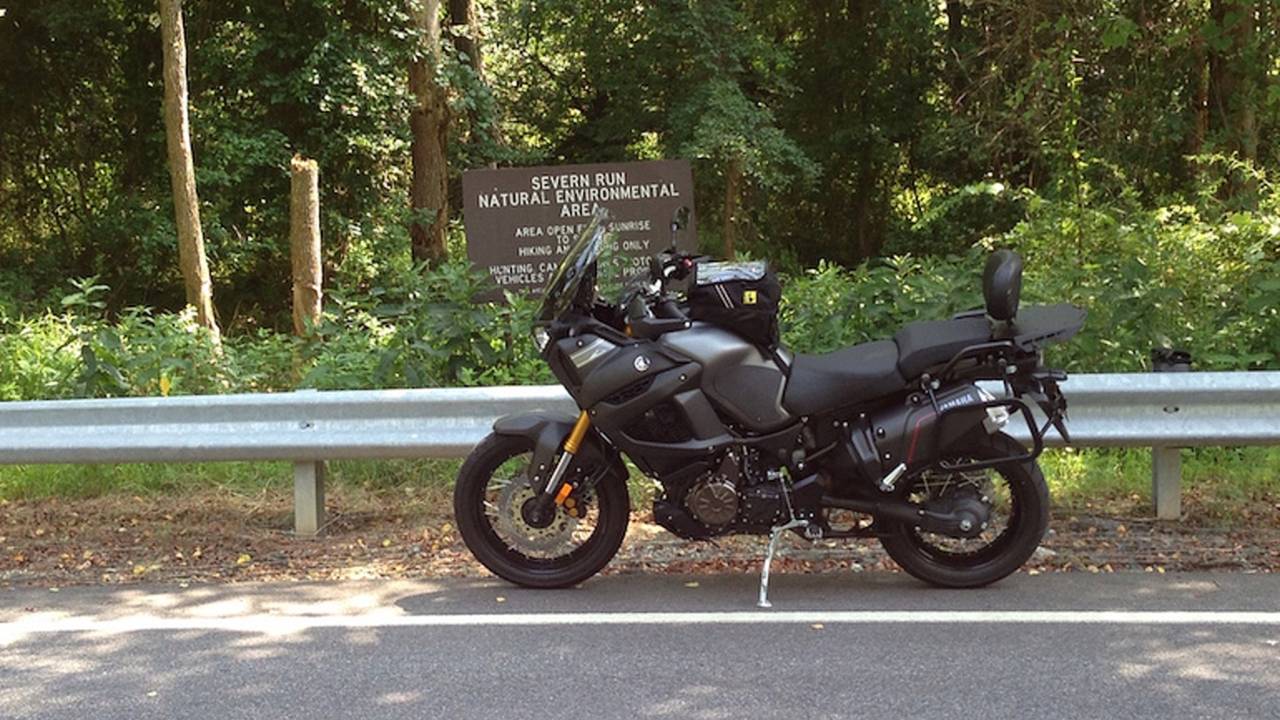 Two years ago I began a long-term test of the Yamaha Super Ténéré. This is the final review of that bike. It was traded in last week for something entirely different and yet still very capable..

Right now, though, let's recap the bike we did have. The 2014 model year brought an update to the Super Ténéré that added cruise control as standard, updated lights with LED and projector headlights, and – on the ES model – a suspension that was adjustable at the touch of a button.

Our test bike was the ES model, which initially gave us some issues. Many of the aftermarket side racks at the time didn't fit the new bike. There was a new rear side cover and the motors for the electronic adjustment were under it. We ended up going with racks from Metal Mule to move things forward. They were very expensive but exceptionally well made and allowed us to test multiple sets of soft and hard bags.

With any adventure bike one of the main criteria for its usefulness is the ability to carry cargo like bags, camping gear and more. The original Super Ténéré was well suited to the task but the addition of pushbutton controls with a multitude of presets improved the performance all the way around.

Sure you can stop and turn some dials on your manual control shocks but with these systems the ability to hit new terrain and adjust on the fly allows you to just keep going and going and going. Need a softer ride dial it up, stiffen it up for hard riding, whatever you need on the fly.

The other area an adventure bike needs is a powerful motor. There's an old explanation of the difference between horsepower and torque that I really like: Horsepower is how fast you hit the wall, torque is how far you take the wall with you. The Ténéré has the second lowest stock horsepower of any large displacement adventure bike. But it makes power where you want it. It has a good mid range that allows you to cruise at speed, run back roads with ease, and haul all the gear you want. You can do all this while still getting 40+ miles per gallon.

During our time with the Super Ténéré we modified it for more power with a custom flashed ECU, new head pipe from Arrow, and a Yoshimura tail pipe. You can read that article here. In a nutshell we went from a stock 85HP at the rear wheel to 103HP. The extra power was nice but honestly the bike didn't need it. The ECU flash, from ECUnleashed was great to make it run better and deliver a smoother throttle with less engine braking and was the best part of the upgrades.

We also want to thank AltRider for their support of the review with tons of their parts and expert advice.

The Not So Good

With all of the electronics and cables for the suspension and so on attached to the handlebars, it's almost impossible to get the ergonomics correct for taller riders. There just isn't enough length in the cables.

The bike is heavy. Except for the Moto Guzzi Stelvio it is the heaviest adventure motorcycle on the market. At speed it's not terrible but in low-speed maneuvers it can be a real pain. It also tends to cause the front end to push on pavement when you start to ride at enthusiastic speeds.

As good as the ECUnleashed flash is there are still some issues with the Yamaha power plant. There is entirely too much engine braking; it makes it hard to be smooth and it makes riding off road a bit more adventurous than it needs to be. The other issue is programming. The engine doesn't give full throttle until after 3,000 rpm which gives you something to think about when riding instead of just riding.

After two years it was time to move on. I enjoyed riding the Super Ténéré but I won't miss it. It was a good motorcycle but it just doesn't leave a lasting impression for me. It reminds me of a box cutter, it's useful, can be substituted for other tools, but is inelegant and easily overlooked.

Stay tuned for what we replaced it with.