Will the special-edition superbike come with a new aerodynamic scoop?

MotoGP greats like Max Biaggi, Loris Capirossi, and Valentino Rossi all cut their GP teeth on Noale machinery, paving their way to the premier class aboard 125cc and 250cc Aprilias. The brand proved its heavyweight might in the Superbike World Championship (WSBK) as well when it topped the series in 2010 with Max Biaggi. Mad Max claimed another WSBK for Aprilia in 2012, and Sylvain Guintoli added one more trophy to the collection in 2014.

In all, the factory secured 52 world titles (riders and manufacturers) since Gramigni’s fateful 1992 championship. With 2022 marking 30 years since that title, it looks like the Noale firm could have a commemorative RSV4 Trenta trim waiting in the wings.

The brand’s signature superbike already received several updates in 2021, with MotoGP-inspired aerodynamics and a Euro 5-compliant 1,099cc V4 leading the way. RSV4 Trenta images shared on the social media platforms reveal that the celebratory variant will boast the model’s trademark front fairing winglets, but Aprilia could sweeten the deal with a new aerodynamic appendage. 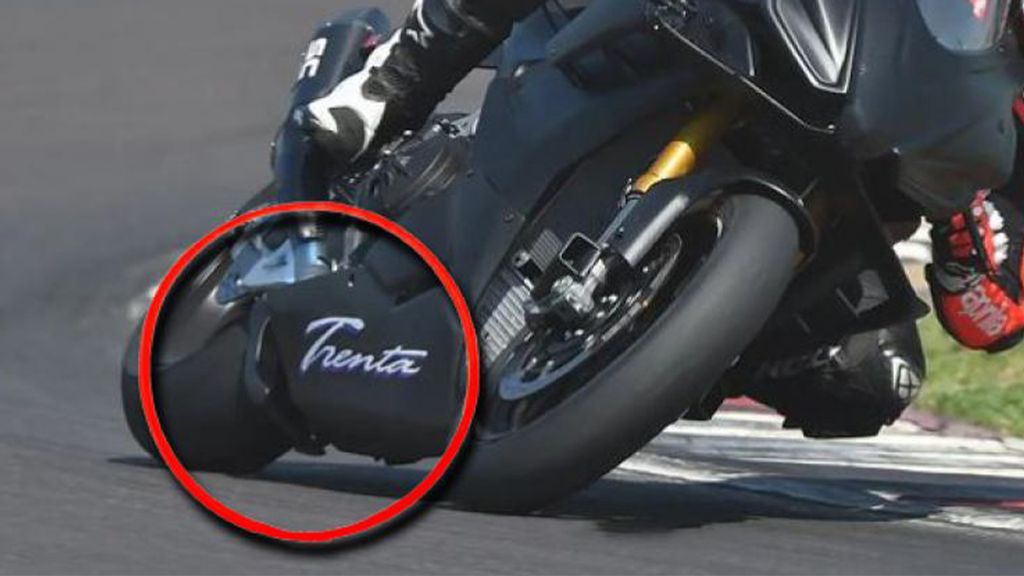 In 2019, Ducati introduced its rear tire air scoop in the Qatar Grand Prix. Nicknamed the “spoon”, the swingarm-mounted mod maintained tire temperatures in sweltering conditions. After some initial controversy, MotoGP deemed the new aero admissible, and nearly all manufacturers have adopted the spoon since.

One such rival is Aprilia, and the Italian manufacturer looks to be the first to equip a production model with the aerodynamic add-on. Aside from the spoon, it looks like the Trenta will also benefit from an SC-Project exhaust. We fully anticipate that system to be a track-only unit, as the Trenta’s fairing doesn’t accommodate road-going headlamps or indicators either.

Of course, Aprilia is no stranger to track-only models, with the RSV4 X launching in 2019 and the Tuono V4 X following in its wake in 2020. Hopefully, the Trenta lives up to the standard set by those two limited-run liter bikes, especially if Aprilia is putting its 30 years of Grand Prix knowledge and success into the commemorative RSV4.