Can It Get Any Lower Than This Two-Mile Ducati MH900e For Sale?

Things just continue to get rarer and lower in mileage on Bring a Trailer. It seems that a lot of sellers are getting their feet wet with selling off their prized bikes. Collectors will be livid over this 2-mile Ducati MH900e from 2002.

For those that don’t know, the MH900e was made as an homage to Mike Hailwood’s 1978 Isle of Man TT-winning NCR 900. This is one of a few of the MH900 Evoluziones that we’ve covered, but this is the lowest mileage with just two miles indicated on its bespoke odometer. Prior to this, a 7-miler held the crown.

If you’re in the market for such a collector’s item, don’t fret because here is yet another limited-run model from the Italian brand, and it’s located in Indiana with only two miles on the clock and some questionably old rubber dating back to 2001.

Though, as a collector, you might want to bring a trailer for this listing on Bring a Trailer, because the bike is as mint as can be. Numbered 854 out of 2,000 ever produced, the bike will be sold with its original shipping crate and an official Ducati T-shirt that displays the matching production number. Just like the other MH900e units, the bike comes in that passionate Italian red and is finished with silver graphics.

The bike is motivated by a 904cc L-twin engine mated to a six-speed transmission. Any way you pitch it, the bike looks gorgeous. It’s no modern Panigale, but it does carry the authenticity of a vintage Ducati because it remains oil-cooled and produces 74 horses along with 56 pound-feet of torque.

An oil change was conducted in 2021 along with a timing belt change, though and as mentioned, if you are to ride this bike in the near future, it would be wise to get a new pair of tires for this as the 17-inch Marchesini wheels are wrapped in 2001-dated Michelin Pilot Sports.

Still, everything that this bike comes with is fresh to death, with the plaque, the keys, and even a single-sided swingarm paddock stand specific to the MH900e is included.

Bring a Trailer was even cheeky enough to state the Carfax report on the listing, which indicates that the bike has been in no accidents. I mean, two miles on the clock with an accident is nearly impossible, right? Anyway, the first bid on this bike is funnily set at $12,345 USD, but of course, expect that number to go up because there is quite a bit of time before the bike’s auction ends, October 10, 2021, to be more specific. 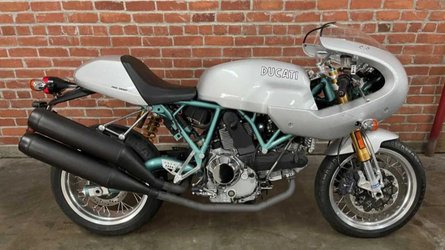 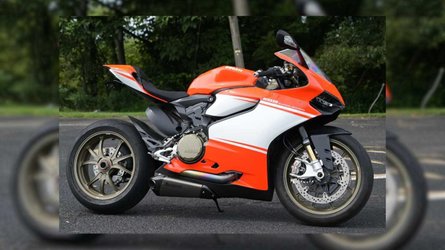 This 450-Mile Ducati 1199 Superleggera Can Be Yours