When we think of Moto Guzzi’s 100-year history, iconic models like the V7 Sport, Le Mans 850, and V8 500 GP immediately come to mind. Some may even associate the Mandello del Lario brand with new models such as the V9 and V85 TT. Enthusiasts seldom acknowledge Moto Guzzi’s Bellagio, but custom shop Guzzi Motobox turned to the custom cruiser to commemorate the company’s centennial.

Released in 2007 and discontinued in 2012, the Bellagio’s short run doesn’t reflect the platform’s potential. Equipped with a 935cc transverse V-Twin, adjustable suspension, and Brembo brakes, the Bellagio was a sleeper for many cruiser fans and Guzzisti. Apparently, that wasn’t the case for Spain-based Guzzi Motobox.

The custom build began when a client rolled a 2011 Bellagio into the Tarragona workshop. With 2021 marking Moto Guzzi’s 100th anniversary, the team felt that it could satisfy the client’s requests and honor the brand’s milestone at the same time. To shed the Bellagio’s cruiser performance and aesthetic, Motobox replaced the tins with café racer bodywork, sharpened the steering neck geometry, and fabricated a new subframe.

A Yamaha R1 donor wheel up front sharpened the handling while a magnesium wheel in the rear lightened the load. Motobox even cast off the stock Brembo calipers for Beringer six-piston, billet aluminum binders mated to discs with carbon cooling ducts. Custom Ohlins suspenders at both ends completed the chassis.

Performance upgrades don’t end with the chassis, either. The Bellagio’s 935cc displacement wasn’t enough for the custom shop, so they installed new cylinders, pistons, connecting rods and a crankshaft. Two 44mm Mikuni carbs and an Akrapovic exhaust system helped them tune the updated transverse V-twin. The revisions resulted in a 1,700cc engine capable of 142 horsepower and 118 lb-ft of torque.

Though performance was at the heart of the 100th Anniversary Project, Motobox knew the custom’s cosmetics had to be worthy of the occasion as well. A modern V7 gas tank, modified Triumph Thruxton fairing, and brown leather saddle clearly set the Bellagio apart. The blue/gold paint scheme works perfectly with the gold accents and leather seat as well. Fiberglass aero wings certainly contemporize the design, but the project still maintains its classic aesthetic.

“The challenge was to build a Guzzi that rivals modern-day capabilities, has a top-quality finish, and looks like a motorbike that has come directly from the Mandello del Lario factory,” admitted Guzzi Motobox co-owner Manel Segarra Capera.

If you ask us, Capera and crew pulled off the feat admirably.

A Year To Celebrate: 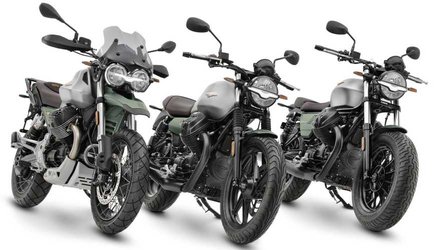 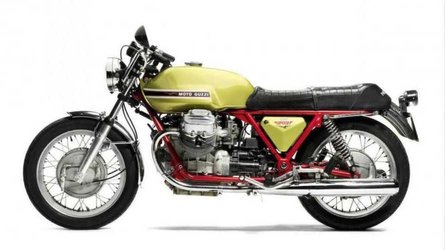